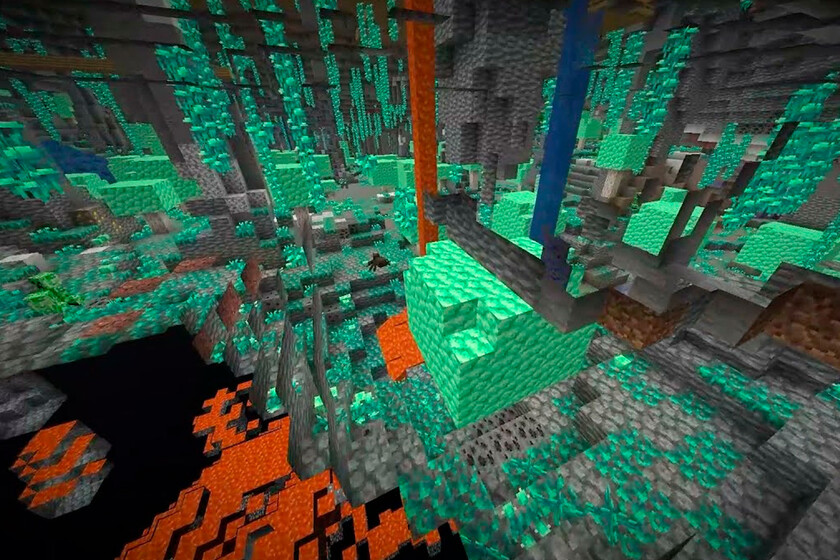 The world of mods is like pipes, Donettes and microtransactions in FIFA: when you pop, there is no stop. Last week I told you about my journey through the Nether world of Infernal Expansion. Now, I return to the web curseforge to download the Darker Depths mod, which takes me to some not-so-deep depths.

the mod Darker Depths Modify the caves of an original Minecraft map by adding different biomes with their own modified blocks, enemies, materials (eg amber), items (eg rope or chain) and much more. It’s not as big and complete a mod as the previous one, but it allowed me to explore it with relative ease.

Exploring the caves of Darker Depths like Indiana Jones

My first experience with the mod Darker Dephs It didn’t start out in the most hopeful way possible. I start my journey in the biome Sandy Catacombs (Sandy’s catacombs). I don’t know who Sandy is, but they should change the name because I fell into one of their lava lakes and died. I rename them as Alberto Catacombs. Not even 5 minutes alive. We started well!

I go back down to the Sandy Catacombs, this time equipped to the teeth not to die even by chance. There is not much to see beyond the lava lakes and amber ores that I find in some corners.

This is one of the most dangerous and claustrophobic biomes in the mod. You can identify it because there are a lot of dead roots coming out of the roof, simulating that you are close to the surface. Goodbye Sandy Catacombs, thanks for the kill.

An hour later, I arrive at the biome Glowshroom Caves. The wait is worth it, because it becomes my favorite biome in the entire mod. Its name has a lot of chicha, but even so I rename it as “fungi biome” for the presence of green vegetation, lianas and fungi.

The trees you see in the image below are NOT trees, they are big groups of fungi that form a tree. On the ground I find more mushrooms and some enemies like zombies, skeleton archers and one of the new enemies: the Glowshroom Monstera kind of hunched golem with mushrooms on its back.

I found out that fighting the Glowshroom Monster is the same as the Golems in Minecraft. Once again, my conquering ancestors possessed me to try to conquer “the new world”. The biome doesn’t have much more to explore, but the formations of the rooms, almost always throughout, reminded me of some abandoned dwarf mines. After a couple of hours exploring it and playing archaeologist/biologist, I decide to continue.

Read:  Minecraft: the 5 things that all gamers would like to see in the world of Mojang

The next biome I find is called Moltern Cavern. I nicknamed it “the mount of destiny” because it was full of lava, stone and ash particles in the environment… because I can assure you that it wasn’t snow.

While wandering around, I found an enormous amount of spiders…but an insane amount. They were hundreds. In addition, there were zombies, skeletons and another of the new enemies: Magma Minion. I had no need to rename the latter. No name can top Minion. Pure adorability on the part of this enemy. I didn’t want to get close to avoid having to kill him.

The 5-6 hours that I was exploring all the caves did not give me even to begin to see everything. Since I don’t have time to explore everything “legally”, I spectated my game to see the full extent of it all…

I’ve never looked at minecraft caves (no mod) with spectator mode, but I’ll bet the ring finger on my right hand it’s not as spectacular as the mod caves.”Darker Dephs“Certainly, I miss new enemies and structures in the caves, but I have no complaints about the new setting provided by the biomes proposed by the mod.

Cave exploration in Minecraft is usually pretty bland because there isn’t much decoration. This time I had a pretty good time… and I admit that it helped to have the soundtrack of The Lord of the rings. She was especially moving when playing the Mines of Moria theme. In case you are interested, my musical recommendation to explore caves is this.

If you’re bored with Minecraft and just want to explore, I recommend the “Darker Dephs” mod on the Curseforge website. You can find the link to the mod both at the beginning of the post and in this same paragraph.

What do you think of this mod? Do you like it more or less than Hell Expansion?, Do you know another that is worth trying? Tell me in comments. I read you!