“I want to get on”; bus achieves the best publicity with image of Toretto 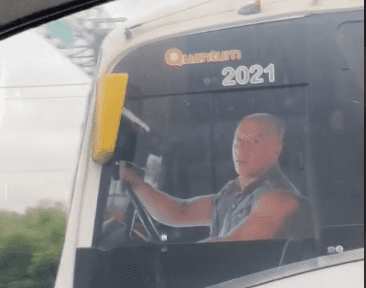 A bus has become the best publicity by placing the image of Dominic Toretto from Fast and Furious in your pilot’s window.

To take into account how important they could become in the daily life of a city, it would be worth considering the Statista study that shows the number of people transported annually by the urban bus network of Mexico City, which during 2019 registered the figure of 157.4 million passengers; Despite this, this data was highly affected by the Covid-19 pandemic, since its passengers were reduced to the amount of 95 million during 2020.

Despite this, The large size and presence of these vehicles around the different entities around the world have made them efficient media in which brands can place their advertising. (in a considerably economical way), allowing the same message to be carried around an entire route to thousands of people who cross their path.

Taking as context that one of the The most successful movie franchises based on their worldwide box office receipts to date is the Fast and Furious series. (Statista), as well as one of its main characters has managed to distinguish itself around the world, a truck has chosen to place the image of Dominc Toretto (Vin Diesel) in its window, thus becoming its best publicity, since hundreds of people have applauded this “elegant” appearance.

The text that the user has put in the video reacting to this bus with Toretto mentions “imagine living in Switzerland and missing this” as a joke, but some other netizens have completely applauded this action by commenting “you don’t need to go to Switzerland when you have a family”, “goal: find that bus”, “it gives me confidence to know that any obstacle will be overcome”, “family is the most important thing”, “showing that Durán is a great family”, among endless similar comments applauding is creative truck advertising proposal.

Read:  Live the world cup with an image and audio out of the ordinary: this is the bet of Sony Bravia

Yes ok to adopt a recognized character in an advertisement you have to be very careful not to infringe the copyright of a brandintegrating these into our strategies could represent a good opportunity for audiences to feel in tune with our content and awaken that feeling of familiarity or proximity with us, managing to attract their gaze and, therefore, positive results.

This feeling of familiarity or adoption of trends can be used by community managers and content managers when they want to gain interactions with followers. and position yourself before the digital crosshairs; however, we have even witnessed some products of great personalities.

We find an example of this with that entrepreneur who chose to take advantage of the rise of Formula 1 in CDMX and make some crochet dolls in the shape of Checo Pérez and Red Bull in order to increase his sales, a fact that without a doubt it worked.

Adopting a well-known figure can become the best publicity for a brand, as long as the copyright of the brand is not infringed.

He buys a Mercedes cap for Mercado Libre, but one from the PRI arrives