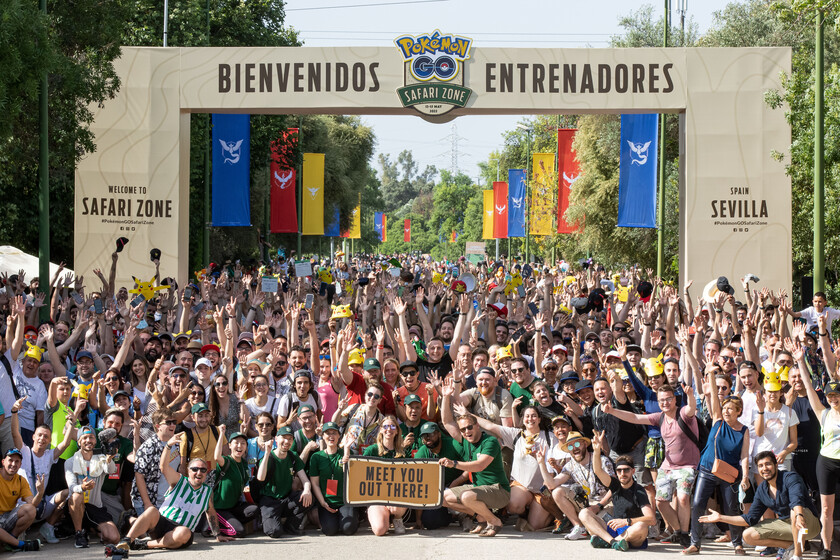 There is nothing and less left for Pokémon GO to put on the party hat to celebrate its sixth anniversary with Pokémon GO Fest 2022. Throughout all this time, the Niantic video game for mobile devices has maintained its success around the world, somewhat that I have been able to verify on my own with the Safari Zone that has taken place in Seville.

The event in question is one of the most important in the game that goes through different cities around the world, becoming an essential event for all fans of this Pokémon title. Of course I didn’t want to miss the appointment, so I traveled to the Andalusian city to experience first-hand everything that happened.

A place created for all Pokémon GO fans

The last time I attended an event of this type was at the Pokéquedada that was organized in Madrid in 2016, at a time when Pokémon GO it was on everyone’s lips because it was just published. At that time we came to gather thousands and thousands of peopleso I wanted to find out if the move was repeated once more, something that has indeed happened.

The journalists who were invited arrived first thing in the morning at the Alamillo Park, the place chosen to host the Safari Zone. It was clear that we were in the right place by the arch of Pokémon GO that welcomed us while we could listen to different melodies of the saga in the background that would surely be very familiar to the most fans.


I have to say that the latter made me cringe at times, because with the number of songs in the series that exist it was easy for none to be repeated all day, but they practically sounded the same over and over again, like the one in Bosque Verde, the base of Team Rocket or the one in Pueblo Lavanda, although it is also true that as the day progressed he did not pay as much attention to them as he was more focused on the game itself.

The truth is that the surrounding decor was excellent, with the flags of the three teams hanging from the lampposts throughout the venue. Plus, best of all, admission was free for anyone who wanted to stop by to experience it all in person. Instead, what was paid was the pass to the event within the game itself, in order to take advantage of all the advantages and bonuses it provided.

Only those with the advance ticket could start playing from 09:00 in the morning, while the normal ticket gave access to the event from 12:00, but in both cases the party ended at 18:00. Thus each of the three days in which the Safari Zone took place. Of course, we were only present in the first of them.

Coaches who have traveled from all over Europe

From the morning the park began to fill with people, although it was noticeable that it was a daily day and a Friday, because in the first hours there were not as many players compared to those who arrived as the hours went by. What particularly caught my attention is the fact that it was extremely rare to meet a Spaniard, because everywhere there were users from other European countries.

It was only necessary to listen to them to realize that players from France, Germany or the United Kingdom, among other places, had traveled here, which makes it clear that the fondness of many people for Pokémon GO is too high to attend this festival from so far away. In addition, it shows that we all shared the same hobby for how easy it was to strike up a conversation with anyone.

In fact, Niantic members throughout the park handed out various gifts, including key chains, and posters where you could write down which Pokémon you were looking for and the Pokémon you offered in return to exchange, so that it would be easier to communicate with others in the case of not controlling other languages.

Activities to hang out in the park

Beyond capturing and exchanging Pokémon, in one of the esplanades several scenarios had even been drawn to dispute combats. Although it does not matter much where each one is placed as they are wireless confrontations, it was a more curious way to get more fully into these battles between players.

The most collectors could also go to a merchandise store that had been set up in an area of ​​the park, in case someone wanted to take home a souvenir, such as stuffed animals, backpacks and there was even an exclusive t-shirt that could not be found anywhere else. The problem was the very high temperatures, because there was no shade to shelter while waiting in the long lines to enter.

And it is that the heat was perhaps the biggest inconvenience that we came to find, with moments in which the heat that it was was touching 40 degrees, hence on more than one occasion I had to give my mobile a little rest so it doesn’t get too hot. Luckily there were too many trees that served to protect themselves from the Sun.

They even got up tents with benches, tables and power strips to charge mobiles, for which in that sense it was very well assembled so that it was not necessary to pull portable batteries and not have to worry about the fact that the battery would run out. However, these tents had little greenhouse effect and late in the afternoon it was even better in the sun than under them.

Luckily, the power strips weren’t the only good idea, since everywhere there were fountains and places to drink water and stay well hydrated, which was undoubtedly quite necessary to withstand the temperatures. In addition, there were foodtrucks with quite delicious food and where you could also get drinks if necessary.

On the other hand, in another of the stalls you could find someone dressed as Pikachu and Eevee to take a picture with themSomething that the little ones would surely love. And they weren’t the only Pokémon, because there was even a giant Snorlax surrounded by a few Poké Balls or places to pose with the leaders of each team.

Capturing the most special and iconic Pokémon

Returning to the main objective of the game itself, those with the event ticket could participate in a very simple special research task which had two steps to perform. Among the rewards to unlock was a Super Incubator, a Lucky Egg or a total of 30,000 Stardust, but the best of all was an encounter with a shiny Corphish, so that everyone would get a special Pokémon.

Likewise, having the pass guaranteed the massive appearance of other Pokémon, including Tauros, Mareep, Miltank, Roselia Tepig, Litleo or Oricorio, to name a few of the most frequent. Even among all of them there was a Pikachu with a new hat and several Unown that formed the name of Seville.

It was assumed that anyone could appear with his shiny form, but the truth is that luck was not on my side. Of the more than 300 Pokémon that I captured throughout the day I managed to get only one pair with this coveted shape. What was impossible was placing any Pokémon in the Gyms because they either filled up in a jiffy or were constantly being attacked by other players.

Personally, for the price of the tickets, I consider that the research task should have provided better prizes, that it would have been longer or that the percentage of appearance of the shiny Pokémon would have increased a little more. More than anything to offer a greater excuse to everyone to go to the Safari Zone for three days and not see it or accomplish everything in one day.

In any case, the experience has been very worthwhile for being able to share it with other press colleagues and countless players who traveled to Seville. I hope that this has not been the first and last time that we host an event of this type in Spain so that we can continue enjoying Pokémon GO with thousands of people, although yes, I wouldn’t mind if it was in a less hot season.