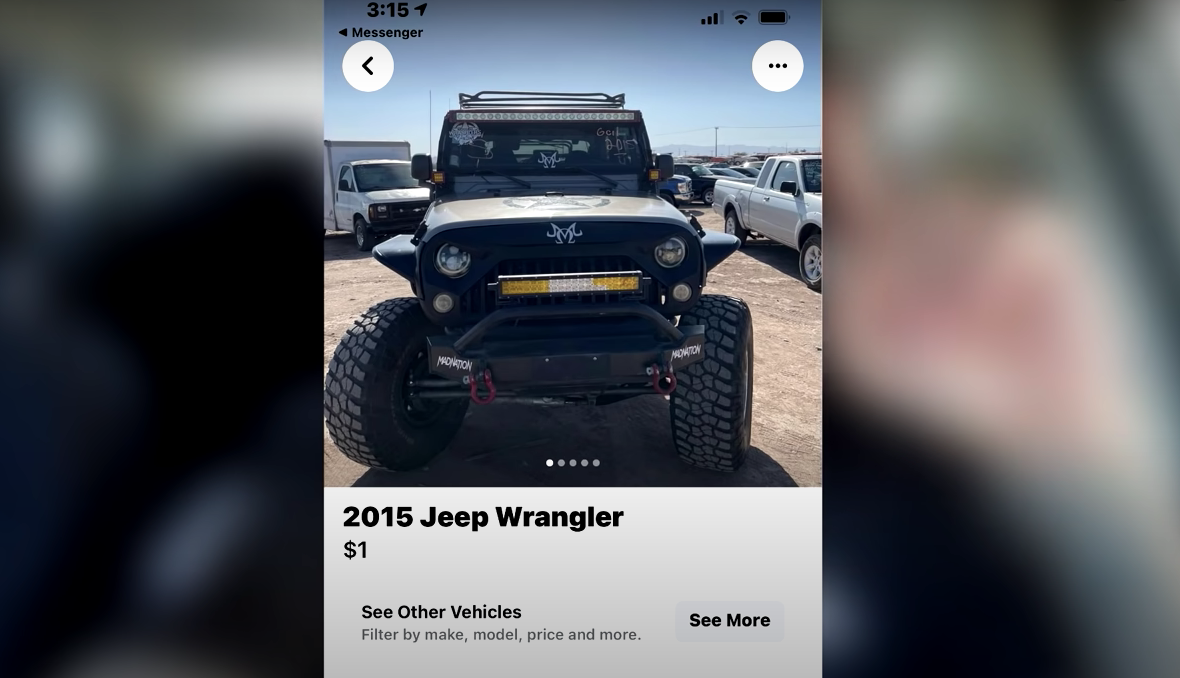 The joke of a youtuber has ended up being a great lesson for a Facebook salesperson, who sold a Jeep at one peso.

In the world of social networks inhabits all kinds of content, many of them very popular among Internet users and, above all, extremely creative.

Without a doubt, one of the great virtues of social networks and digital platforms is the freedom of content; practically, any user can make the content they want, yes, under their own responsibility.

In that sense, for those who do not get rid of platforms like YouTube and are in search of entertaining stories, one of their favorite contents is those that are built from jokes, especially those that, in reality, put those who are in check. they are scammed.

Based on this, on YouTube and many other platforms, there is a huge community of creators who are dedicated to making practical jokes, many of which tend to get out of control and end with somewhat serious consequences.

On the other hand, there are internet personalities who dedicate time and effort to construct a joke in order, on some occasions, to expose certain gaps or, even, to give a lesson on what should be corrected.

This is the case of the youtuber, Gusgri, who on his channel has more than three million subscribers thanks to the type of content he usually publishes and which, from what can be read in the comments, are some of the favorites of his followers and of those who seek this kind of stories in social networks.

Thus, in a new video published a couple of months ago, one of Gusgri’s usual jokes ended up teaching a Facebook Marketplace seller a lesson.

As he recounts at the beginning of the video, it is actually a joke in which he contacted a Facebook seller to buy him a Jeep that, on the platform, was offered in one peso.

From there, the trick begins to be built, since even in part of the content you see a couple of characters who pretend to be inspectors of the Federal Consumer Prosecutor’s Office (Profeco), who are going to verify that the purchase is made, then, in the end, it is a mistake of the seller and, as such, the price must be met.

Read:  What is the TikTok Blackout Challenge?

In the end, after more than 15 minutes, the seller ends up finding out that it is a joke and his Jeep is returned to him, but, without a doubt, the most important value is that this has revealed some of the most common mistakes that are made. on platforms such as Facebook Marketplace, where many products are offered in one peso (many do not even have a price and others have the legend “Free”), a fact that the YouTube Gusgri wanted to take advantage of to make his joke.

It must be taken into account that the arrival of the pandemic caused a growth in online purchases and platforms such as Marketplace, among others, represent a great opportunity, especially for second-hand sales; a more direct way to contact the seller or buyer and reach an agreement more easily.

The comments on YouTube show how this series of practices by the sellers themselves can turn into a very serious mistake:

“The sellers are wrong, they must put a price. This is a joke, but I want to tell you that in Monterrey a butcher put a kilo of meat at $ 10 pesos, many people went to buy and not just a kilo, they were for many kilos. It turns out that the kilo of meat was $ 100 pesos; for an error of a zero, people asked that the price that was there be respected. It was Profeco and they made valid the price that it had there of $ 10 pesos. Therefore, sellers, put the real price, it has nothing to do with the competition. The sun rises for everyone and do not play with people not to put a price on it ”.

In this case, it was only a joke by the youtuber, but he makes it clear that it is a serious mistake that, without a doubt, can have important consequences.

Is IPTV piracy over? This new method changes everything

América Chávez could debut in Spider-Man: No Way Home