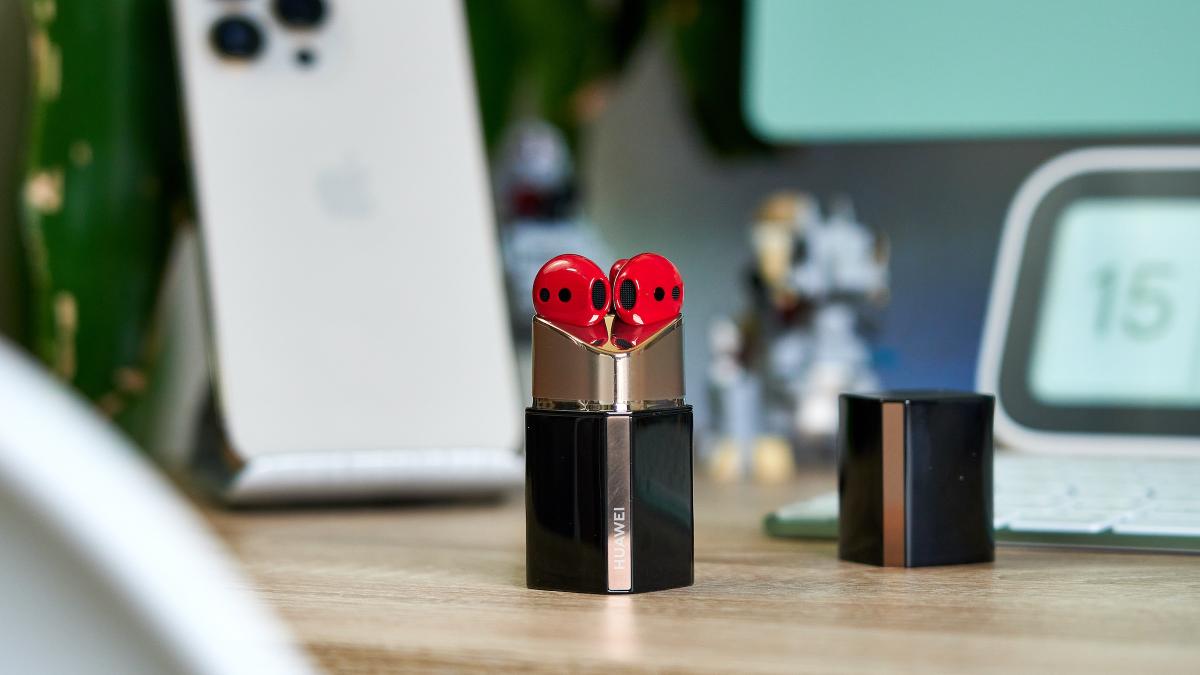 This 2021 we have seen very good wireless headphones. We have had new brands such as Nothing or realme, but also proposals from more established companies such as Sony, Apple, Samsung or Huawei and the good thing is that, in addition to many models, we have had devices for all budgets and needs.

And now they are launching headphones that are surely the most controversial in recent years. And it is that it is about Freebuds 4 with a box that looks like a lipstick and that costs 90 euros more. Let’s go with the analysis of the Hawei Freebuds Lipstick.

Sections of the analysis of the Huawei Freebuds Lipstick:

Index hide
1 Lipstick looks like, Freebuds 4 are
2 Compatible with iOS and Android, but within the Huawei ecosystem
3 Strong and with a sound cancellation that stays half
4 20 hours in total on a remarkable charge
5 Always divo, never indivo

Let’s start the analysis by talking about the elephant in the room: box.

It is clear that it is a box that attracts attention and, although in the end the tone will be more negative because I do not understand the price very well, I have to say that I would not buy them, but the box seems very, very beautiful.

It looks like lipstick and that piano black (which catches fingerprints like a champion) and the gold trim looks very tasteful to me. In a bag or on the shelf with cosmetics, really, no one would say that they are headphones.

And so far all the good things I have to say about the box, since one of the things that, I think, consumers value the most in this type of device is comfort and here it is conspicuous by its absence.

I think I’m not alone in this, but i will tell you what i am looking for in a true wireless headphone box: something small that slides well through the pocket of a pair of jeans, so the thinner the better.

That the magnet of the headphones is strong so that they do not fall, that they weigh little and that the lid can be opened with one hand to be able to take each headset with the other.

And sadly, of all that … the case holds the magnet that makes the headphones stick together.

I don’t want to be too bitter about thisI know that Huawei did not create the box to go in jeans, but in a bag, but I do not consider it to be a practical case. And in fact, it weighs quite a bit, more than double without the headphones inside if we compare it to the one on the Freebuds 4.

For his part, heI find the headphones quite nice in that red color that I already loved in some previous generation of Freebuds and where we find different microphones, the earpiece and the proximity sensor that pauses the content if we take them off.

I still find them very comfortable and are ideal for those who do not want headphones with a pad for whatever reason. Everything is positive in this design, really, as it was already in the Freebuds 4.

And good, in the box we have the headphones and the USB charging cable, nothing more. The box, by the way, is also quite nice.

Compatible with iOS and Android, but within the Huawei ecosystem

The box is the only thing that changes, as we have already discussed, in these headphones. The rest of the experience is exactly the same as what we had a few months ago in the Freebuds 4 and, honestly, that’s pretty good.

We connect the headphones via Bluetooth 5.2 with a very low latency and, in fact, I have not had any problem in this regard.

If I edit video and I want to make a composition in which the music marks the changes of the plane, obviously, I cannot do it at 100% because there is some latency, but to play and watch series I cannot complain.

It seems to me that the latency is satisfactory for the vast majority of users and the application, as it usually happens with Huawei, hits the spot.

It works with both iOS and Android and is called Huawei AI Life. From it we will be able to change different parameters of both the sound and the microphones, as well as customize the playback controls and see the battery status of both the headphones and the box.

It seems like a good application to me, but in Android and Huawei we have some extras such as voice improvement and, only in Huawei, a full integration with the ecosystem. This means that if we open the lid, the mobile recognizes them and connects easily.

Read:  How to turn off the zoom on the iPhone screen

The gestures work correctly and I like that they allow you to control the volume like the AirPods -analysis of the third generation- or the Nothing Ear 1 -analysis-.

Strong and with a sound cancellation that stays half

These headphones they are curious because they have noise cancellation and an open design. It seems somewhat contradictory, since to achieve the first we need a more closed design, with some pads, but I know quite a few people who, I don’t know why, do not like to isolate themselves.

That’s why these headphones, or the AirPods 3, work so well among those users, since we are listening to music with a very good quality, but without being ‘in our world’.

The drivers are 14.3 millimeters, a fairly generous size that allows for a defined frequency range. The bass is strong, the treble also complies and the mids are at a very good level.

The sound quality seems excellent and the cancellation … well it’s there. I can’t rate it as that of another type of in-ear headphones, or like that of the Freebuds 4i -analysis-, but I can say that it ‘mitigates’ external noise.

You are going to listen to everything a little quieter, but isolate yourselves and, of course, they are not the ones I would choose to go by train or plane, since you have to raise the volume of the music quite a bit to enjoy it, something that does not happen with closed headphones, but for those who want to go down the street without losing track of where they are, I think it is a fantastic option.

Good sound, cancellation that attenuates the external and comfort. I think those are the three keys to these headphones.

On the other hand, I leave you an example of how my voice sounds through the microphones of these Lipstick Freebuds with the ‘HD call’ mode activated.

They are not the ones that capture a warmer sound, but these days in video calls and calls I have not had any complaints.

20 hours in total on a remarkable charge

Again, past experience is key to understanding the autonomy of Lipstick.

The box has 410 mAh and each earbud has 30 mAh. It is exactly the same as in the Freebuds 4 and I would have liked that, because the box is somewhat larger than the circular one of the previous ones, it had a little more capacity or wireless charging, but it is not like that.

The box is charged by USB-C and in half an hour of charging we fill 75% battery out of the box with the headphones on. On the other hand, if the headphones are left at zero, they charge to 55% -60% in just 15 minutes inside the box.

It is a fairly fast charge considering other devices and it is a positive point, as well as the autonomy of the headphones themselves.

With noise cancellation I have about four hours of autonomy And the truth is that this autonomy added to the fast charging of the headphones in the box, make a transoceanic flight hold up perfectly.

We come to the end of the Freebuds Lipstick review and I think the conclusion is the easiest to draw in my career: it’s the Freebuds 4, but with another box.

I knew that from the first moment I put on the headphones not because their specifications are the same, but because I am a fairly active user of the Freebuds 4 and it was like simply switching from one color to another.

I really like the design of the headphones because it does not fall off (although each ear is a world) and it seems to me that the sound we obtain is of quality, with a good presence of all frequencies.

The autonomy is correct, the charge is fast and we have full compatibility with Android and iOSAlthough only on Android that extra voice enhancement setting, but hey, if you have an iPhone you can use it without problem.

But in the end, the enemy has it at home and I do not mean the Huawei Freebuds Pro, but the Freebuds 4 that are not only exactly the same, but are much cheaper and have a much, much more comfortable box.

At the end, I think the target user of these headphones is a niche, with all that the term entails, and I suppose Huawei will know it, but sadly, although they are objectively good headphones, we cannot recommend them because there are better and cheaper options both on and off the brand.

And well, as a reflection, I thought to keep the note of the Freebuds 4, a 90, because the headphones, their technology and their sound quality are identical, but to be fair, one of the things I liked the most about the originals was how comfortable and how small the box was and all that, here, is completely lost.