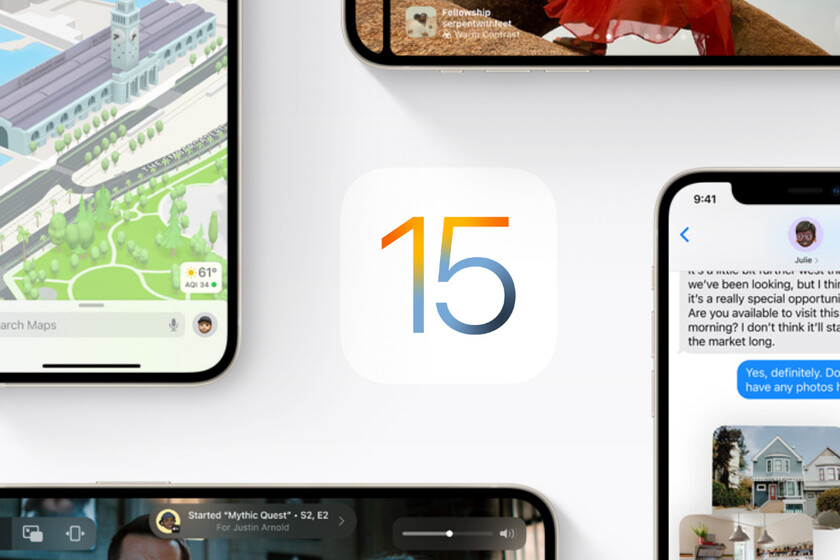 Like every year, Apple took advantage of the WWDC in early June to present the new versions of its operating systems. And among them was, of course, iOS 15, which promised a lots of news and improvements. After testing the beta, we found that, although it may seem like a minor revision with few changes at the interface and functions level, iOS 15 does bring a multitude of new details.

Three months later, in its autumn keynote, Apple has finally confirmed when can we download the stable version iOS 15. And although it was officially confirmed in June, it has re-listed the iPhone models in which the new version of the operating system will be available.

As is customary in Cupertino, Apple announces the new version of iOS in June, opens the beta period in July and releases the stable version in September. This year is no exception and the company has confirmed that the update to iOS 15 will be available worldwide in a few days, specifically, next Monday, September 20.

The new version of the operating system will probably be released in the common publishing windows for Spain and some Latin American countries:

What iPhone models are compatible with iOS 15

Leaving aside the new generation of Apple’s phone, the iPhone 13, which will come with iOS 15 as standard, all models from 2015 onwards as well they will be able to update their version of the operating system. Specifically, below you have all the iPhone models that are compatible with iOS 15:

That is, for the third consecutive year (it already happened with iOS 13 and with iOS 14), all models after iPhone 6S They will receive the update to iOS 15. And that without forgetting the 7th Generation iPod Touch, which is also compatible with it.

How to update iPhone to iOS 15

The usual thing is that the phone itself shows you a notification telling you that there is a new version available system, and from the notification itself, you can accept both the download and the installation. In case you do not receive it, we can force the system itself to look if iOS 15 is ready to download: to do this, we must go to Settings> General> Software update.

Before starting to download and install the update, you must make sure that you have a stable WiFi connection and sufficient battery (you can connect iPhone to charger). In addition, it is recommended to make a backup, either through iCloud (Settings> Apple ID> iCloud> Copy to iCloud> Back up) or through iTunes (using a Mac or PC).

READ:  MIUI Puro, the new way to protect your Xiaomi

In any case, keep in mind that iOS 15 is released globally and servers tend to slow down for the first few hoursSo, as we always say, be patient because the update process can take much longer than you would like.

As we said at the beginning, iOS 15 brings with it a set of small novelties that manages to create a big change at the system level. Next, we tell you the most important ones: