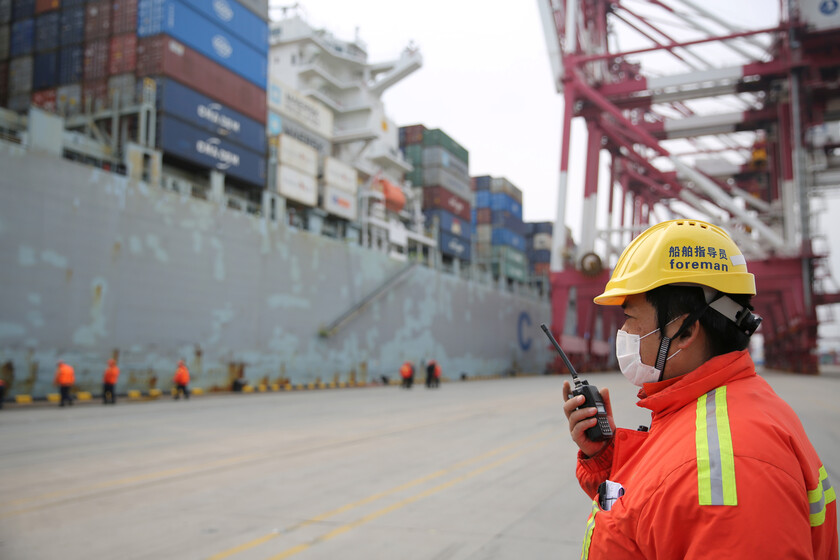 Sure the name of Ningbo-Zhousan does not tell you anything, but it is very likely that it comes from there a good percentage of the things made in China that you have in your house. Ningbo-Zhousan, which overlooks the East China Sea about 200 km south of Shanghai, is the second busiest port in China. He only handles the annual equivalent of some 29 million six meter high containers.

At the time of writing (August 18, 2021), it has more than 50 ships waiting to dock. That’s because the Ningbo-Meishan terminal, which handles about a fifth of the port’s total volumes, has been closed for a week after a staff member tests positive for COVID. With no news of reopening, many more ships have been diverted to alternative ports.

Unfortunately, this is the tip of the iceberg of what is happening in shipping. China has eight of the ten busiest ports in the world and right now they are operating at a much lower than normal capacity due to covid restrictions. From Shanghai to Hong Kong to Xiamen, ships are crowding in line to unload, and diversions from Ningbo are going to make this situation worse. The west coast of the US is also experiencing severe congestion, with many ships anchored in California’s San Pedro Bay, awaiting access to the ports of Los Angeles and Long Beach.

This has caused that, in recent weeks, the cost of shipping fees has skyrocketed From containers. The price of moving a 12-meter container from China to Europe is currently around 14,000 US dollars (12,000 euros), about ten times its usual price before the episode. Ok, and how long are we going to continue like this and what effects will it have on the supply chain?

The pandemic and other problems


This situation is notably different from 2020. Covid restrictions also weakened the cargo handling capacity of ports last year, but it was less of a problem because global demand for consumer products was also much lower than at the beginning of the pandemic. Now that many countries have vaccinated a large percentage of their population and their economies are reopening, demand has recovered strongly and ports are not doing well.

There have been other problems, including the blockade of the Suez Canal in March. With the ships stuck for a week after the huge container ship Ever given stranded, the vessels found themselves under more pressure than usual to return to Asia in time after unloading in Europe and America. As a result, many did not wait to be fully loaded with empty containers to set sail.

This contributed to the lack of shipping containers in Asia, which was already becoming a problem as ships did not always call at their usual ports during the pandemic because demand was much lower than normal. The result is that containers have become more expensive, forcing shipping companies to charge higher freight rates to cover the cost.

At the same time, extreme summer weather it has also hurt us. Both the port of Yangtian, in southern China, and part of the port of Shanghai have been temporarily closed throughout these weeks due to typhoon alerts. The backlog of goods has also been compounded by major importers balking at shipping costs and deciding to charter their own boats. Home Depot, the big US home improvement retailer, did so in June, for example.

In fact, there has been a slight decrease in shipping rates in the last ten days, causing the Freightos Baltic Index to drop from $ 10,380 to $ 9,568 per 12-meter container. But it is not enough to get excited either: this shows that the price of shipping goods from China to the US has dropped because many ships chose to divert to that route to take full advantage of the high prices. Other routes, such as China to Europe and Europe to America, their prices continue to rise.

As for whether this dynamic is going to continue, it is very difficult to predict. Some shipping companies have ordered new container ships to help address the shortage, but these ships take two to three years to build, so in the short term it’s not going to make any difference.

What matters are future covid outbreaks and to what extent China and other major port nations will continue to impose strict regulations to protect their populations. We may be lucky and the situation will progressively improve from this point on. It may also happen that this mismatch between supply and demand lasts for several years.

We must expect that inflation will continue to rise as importers pass on shipping costs to their customers. Since governments and central bankers are already concerned about rising inflation in many other ways, they may not monitor this dimension.

If the problem with shipping rates perpetuates it is also likely to fuel conversations in high places about if it is wise to depend so much on China as a global factory center. With relations between China and the West already at a low level, as well as a popular sentiment that globalization should move towards greater regionalization, many are already betting on producing more consumer goods in the vicinity (what in the world of the trade is called “nearshoring”).

Another problem will soon bring the fear of God’s wrath back to retailers: Christmas. All those ships that deviated from their usual route between China and Europe to help serve the US are doing so. calculating very fair times to return to China in time to resupply. The entire journey from the US to China takes 45 days; Upon arrival in China, they must leave in mid-October to make the 35-day journey and get the goods to Europe in time for December. If the current congestion in Chinese ports is gone by then, they may.

So the longer this shipping crisis lasts, the more problems the Christmas season will have. It could become the big news of the next few weeks, as everyone expects Christmas 2021 to be a “normal” holiday season with which retailers make up for losses from previous seasons spoiled by covid.

If some little old man from the North Pole in a red suit and sleigh took over the campaign, we could breathe easy.

Author:Stavros Karamperidis, Professor of Maritime Economics at the University of Plymouth.

This article was originally published on The Conversation. You can read the original article here.