Bullfrag
Home Business Marketing How safe is your password? 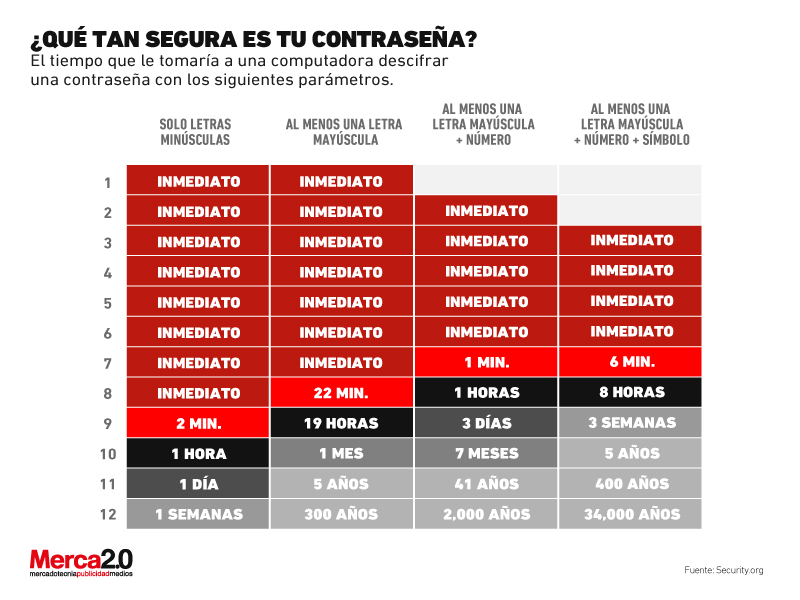 We show you the time it would take for a computer to discover your “password safe”With its proper parameters.

Today most of the planet is already participating in the world digital, in which the use of algorithms, keys, cookies and other factors that allow an effective navigation to its millions of users, giving input that they have to constantly see the need to create millions of new accounts and passwords daily. According to the Digital 2021 study carried out in a joint effort by We Are Social and Hootsuite, approximately 60 percent of the world’s population is already present on the internet, with the result that 53 percent of the planet has at least least one social network, which request (mostly) a password to be able to access your spaces digital.

The cyber security It is a fairly well-known topic, but not so well treated by users (unless specialists in the area are concerned), since they usually create some passwords not at all safe for your accounts, be it social networks, streaming platforms, and even banking.

Some time ago Statista published a study showing the world’s most common passwords (and not so secure) found in some leaks from 2020, where users showed their particular interest in creating (or not) a password that allows you to safeguard your “safe” information, among the most used:

Although today the creation of a password safe is of vital importance for safeguard our personal data from possible fraud and leaks, companies also need cybersecurity experts to be able to develop some protocols and other defenses to avoid being victims of possible cyberattacks, as these are becoming more and more common.

Read:  This diploma has the best strategies in digital marketing

Although on some occasions users may show a certain lack of awareness when making a “password safe“The consequences may not necessarily represent large losses, compared to other large brands that could lose considerable value, both economically and in the same image of the company as perceived by the consumer.

According to information from the UN, it is estimated that around the world there is a cyber attack every 39 seconds, which entails considerable reprisals to the victims; however, those who take these actions do not always get their way and may be subject to a cybercrime fine. Although there may be different magnitudes in this type of crime, the World Organization of the United States of America (OAS) in Latin America and the Caribbean shows that the cost of a crime of this type can entail an expense of 15 to 30 billion billion in 2017 (depending on the impact of this).

While the theft of personal data It is not news, some world-class companies have seen themselves as victims of this type of delinquency cybernetics, from which they have not been able to recover so easily, both economically and in terms of image.

An example of this we had a few years ago with PlayStation, who were hacked by a group of cyber criminals and caused 77 million accounts to have no connection for 23 days, consequently having to pay a fine of a quarter of a million pounds to Information Comissioners Office of the British government for their poor security measures, a fact that also caused damage to their image.

Cybersecurity is of vital importance to safeguard the data of any user, as well as to keep the image of a company intact.

E3 2022 will not be face-to-face; This year’s Summer Game Fest is confirmed

Fans create LEGO sets for PS5 and Xbox Series X, they could be reality

A new free remake of the first Resident Evil comes to the fore and with an identical visual appearance to the spectacular Resident Evil...

Red, the new Pixar movie, will be released on Disney + and not in theaters