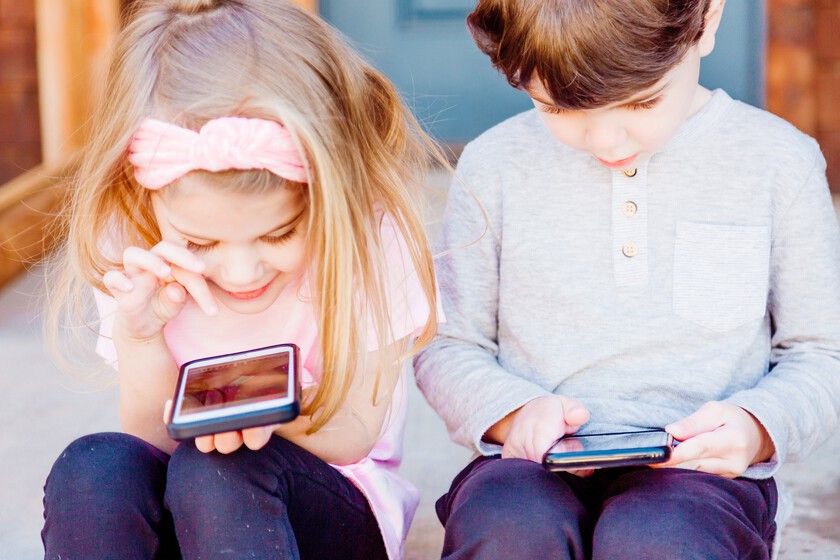 The discovery of fire has been a fundamental part of history for us to be here today, but its misuse and lack of control can hurt us and even kill us. Technology in the form of mobile phones, computers, tablets… “the new fire” that we have to learn to tame and put to work in our favor. When children as young as a few months old make use of these screens, they can “hurt” their brain development, as long as that use is not correct.

It is common to find children who still they haven’t learned to speak, but they already know how to scroll screens on mobile and electronic tablets. Its use should not be demonized if you have control over the duration and purposes for which it is used.

Scientific evidence already provides some information on the short-term and long-term negative and positive consequences that this type of technology has on children’s brains. We are going to discuss in this article some of the highlights of this correlation between children, brain development and technology.

Context: children and use of technology

In some advertisement to invite us to buy a television they detail characteristics such as “total immersion”. It is in this state that we find very young children when they have a technological device in their hands. No matter what happens around him, the child does not stop looking at the mobile or the device.

The World Health Organization (WHO) does not recommend the use of screens until the child is at least two years old. In these cases, it recommends a maximum of one hour a day, understanding by screens not only mobile, tablet or computer, but also television.

However, these data are not met by the majority of children who either use screens before the age of two, or they do it for much more than an hour when they get older. This is shown by a recent investigation that included nearly 90,000 children, showing that three out of four failed to comply with these WHO recommendations.

How will the Covid-19 pandemic affect brain development in now children and later adults? We don’t know because that day hasn’t come yet, but We will be able to check it in a few years. The use of screens skyrocketed at a time when “the world” was our living room.

In this situation we can see a clear example of the different uses of technology. On the one hand, the computers were used to follow the classes, but on the other hand the children had to be entertained and those screens were not dedicated to educational use.

Technology is neither good nor bad, it is neutral. Will be our use the one that gives the adjective “good” or “bad”. We have at our fingertips with a simple internet connection impressive tools to train the generation that will design elements that we are not even capable of imagining.

The misuse of the screens (excessive time or poor quality of what is seen) is correlated with a cognitive tasks and impaired performance, with respect to children who do not make this misuse. The white matter of the brain produces adaptations that suggest worse cognitive development due to the misuse of technology at an early age.

The IQ is also lowered by the excessive use of screens, as well as social and emotional skills. Therefore, children can be seen in adolescence and adulthood with worse intellectual capacity, but even more worryingly, they can have poor quality emotional and social intelligence that damages their mental health.

Read:  teaches us how to combine it this spring

Having less relationship with other children, in addition to diminishing their ability to relate, also worse linguistic ability can be found. That’s the finding of a systematic review with meta-analysis that studied how screen use affected early childhood development.

One of the interesting aspects of this research is that the debate can change if the use of screens is focused on high-quality programming. It is totally different watching videos and nursery rhymes or viewing tasks planned by experts. As it is difficult to change the behavior patterns of all the parents in the world, what can be done is to change what that screen shows.

Boredom is the space where creativity and imagination happensays Rich, an associate professor of behavior at the Harvard School of Public Health. The growing human brain is constantly building neural connectionswhile removing the least used ones.

What happens on the screen provides poor brain stimulation that will make those new neural connections of poorer quality. Also, does not allow that space of boredom to the child for him to create his own entertainment based on his imagination.

Technology provides parents and children with easy access to information and increases creativity by receiving stimuli of all kinds. Helps children to visualize and interact with arts and sciences, being able to “visit museums” and visualize all kinds of science at a click away.

We have already commented previously that it is in these stages that the entire neuronal network is formed. Mix the natural stimuli of real life, with a selection of stimuli of virtual life can generate rich connections.

Technology grows exponentially because when something new comes up, it opens many doors that were still closed. Children who are now starting primary school they will be dedicated to jobs that do not yet exist.

An early technological literacy will begin to introduce pieces of the puzzle in your brain that will fit little by little with the novelties that arise. Therefore, the early use of the appropriate form will help the brain of the child in his adolescence and adult stage to better manage the changes that will arise.

It is often said that technology isolates instead of connecting, but it depends on how we use it. When I was little I traveled in the summer with my parents for their work and made friends from all over Spain. When the summer ended we didn’t see each other until the following year.

Today children can see those friends who are far away and enrich more personal relationships than when there was no video call option. They can also connect with other children around the world and exchange cultures and languages.

This affective development will add to the child’s cognitive performance since it can improve his language development and different brain capacities with this practice of virtual links, when they cannot be given in person.

much remains to be known

Little by little we will learn more quality data on the use of technology in children and brain development, since it’s still early to check since it is temporarily not viable.

Many projects are currently underway, such as the Growing Up Digital (GUD) study that is following the evolution during 10 years of children and adolescents to see the impact of digital technology on your physical, mental and social well-being.

In a few years we will be able to talk based on scientific literature on the positive and negative repercussions of the “new fire”, which we will control little by little.

In Vitónica | The best sports to do with children outdoors