how much do they cost and where are they 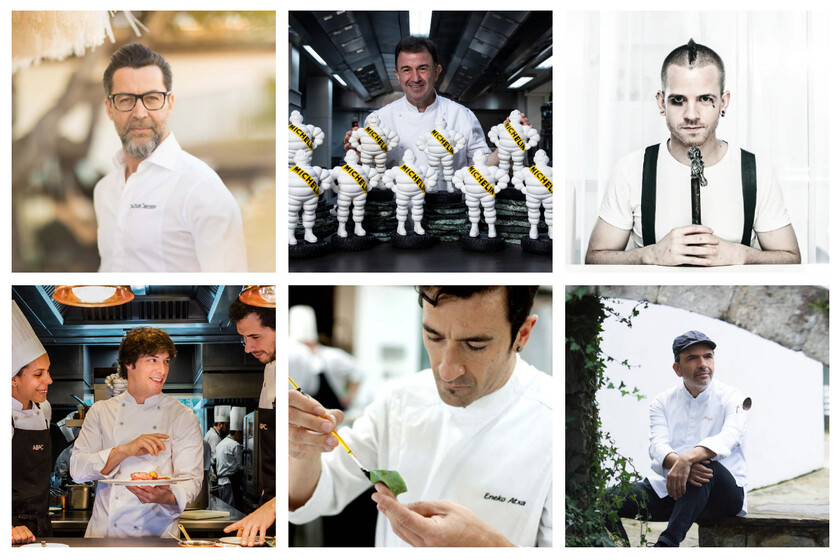 There are already thirteen Spanish restaurants with three Michelin stars or 12+1 as Ángel Nieto would have liked to say to ward off bad luck, with the addition of Atrio (Cáceres) and Cocina Hermanos Torres (Barcelona) to the list of tri-stars.

Dotted by many points of the Spanish geography although leaving some ‘bald spots’ on the map such as the Canary Islands, the Balearic Islands, both Castillas, Murcia, Galicia, Asturias, Aragon and La Rioja, are several Spanish autonomous communities that can boast of already having at least three Michelin stars.

The Basque Country takes the cake, with four in total, seconded by Catalonia, which this year has managed to match the record of Euskadi. From there, we found a three-star salpicón by autonomous community for Cantabria, Madrid, the Valencian Community, Andalusia and Extremadura.

So that we do not get lost in this map of Michelin stars, we we bring the 13 restaurants with three Michelin stars from Spain and how much it costs to eat in them although we give you a spoiler: the prices are not entirely popular.

The three Michelin stars of the popular and television Jordi Cruz is not the most expensive of the restaurants on this list, but it is still an important milestone, since the tasting menu starts at 250 euroswith only one menu option, which can be paired with wines for another 140 euros in a complementary way.

With three Michelin stars since 2007, Akelare, one of the three foundations of the three florets in Guipúzcoa, boasts its cuisine, its chef (Pedro Subijana, a veteran who has been working in these kitchens since 1978) and an impressive hotel overlooking the Cantabrian. The gastronomic experience without drinks is worth 280 euros, to which we would have to add another 110 euros if we want a pairing for any of its two menus: Aranori or Bekarki.

In El Puerto de Santa María, Ángel León, known as Chef del Mar, carries out his marine cuisine apostolate in this old tidal mill that received three Michelin stars in 2017. One of the most innovative restaurants in the world, Aponiente presents a single tasting menu of 270 euros (17 steps in total) that can be paired for 125 euros or 195 euros, depending on the wines you want to drink.

It is the longest active three Michelin star in our kitchen, as this family restaurant in Donosti that opened its doors in the 19th century achieved the three macarons in 1989, when it became the second in the country to achieve it and that in the Currently, the patriarch Juan Mari Arzak and his daughter Elena run it. They have a tasting menu for 260 euros per person which, with pairing, costs 418 euros, and they also have an à la carte menu for 230 euros.

It is one of the new additions to the Michelin Guide in 2023 and last year it was on everyone’s lips when their winery was robbed and brought wines worth more than one million euros. Now, this restaurant from Cáceres proposes refined Extremaduran cuisine where, to start talking, we have to put on the table 425 euros for two people.

Read:  this is how teracrystallization works, a new function that will give a more strategic point to combat

Azurmendi, in the small town of Larrabetzu, is the only Basque three Michelin star restaurant that is not in Guipúzcoa, since it is in Vizcaya. Directed by Eneko Atxa, its cuisine makes rural or homemade its main values, without leaving innovation aside, and from 2023 it will present a unique gastronomic menu with 29 dishes and 300 euros, that can be combined with two different pairings: one for 150 euros and another for 300 euros.

It is probably one of the restaurants that needs the least introduction, but the three-star restaurant owned by the Roca brothers, located in Girona, is also a difficult restaurant to approach due to the number of reservations they receive, even so, It is not the most expensive three-star in Spain: 215 euros per menu and 85 euros for pairing.

Very few restaurants with three Michelin stars openly define themselves as child-friendly and the restaurant El Cenador de Amós, run by chef Jesús Sánchez and located in Villaverde de Pontones (Cantabria) is an exception, as it allows a children’s menu up to 10 years of age for 75 euros. For seniors, the tasting menu costs 237 euros per personwhich can go to 362 euros or 447 euros depending on the chosen pairing.

Another of the new tri-stars in the guide for 2023 is the home of the television broadcasters Hermanos Torres, who have managed to tie Catalonia with the Basque Country in number of three stars. In this case, the tasting menu costs 265 euros and it can be rounded off with a pairing that is worth another 165 euros.

Dabiz Muñoz broke the bank in 2021 when he announced that the DiverXO menu (the only three-star in Madrid) would be the most expensive of the Spanish tasting menus in 2022, since He put the figure in a round 365 euros, that can be completed —if you wish— with a pairing where you start talking about 300 euros more.

Also overcoming the barrier of 300 euros is Lasarte, the ‘Barcelona’ house of Martín Berasategui where chef Paolo Casagrande officiates daily, who has known how to mix Italian, Catalan and Basque in a unique restaurant where the tasting ticket costs 305 euros per person and which, in a In a friendlier tone, it offers a lunch menu for 205 euros.

The Midas of the Spanish Michelin stars and the King of the Garrote looks like the second restaurant with the most expensive tasting menu in our country, with 315 euros per person, which can be added to the 175 euros for the wine pairing. Located in the town of Lasarte, a few kilometers from Donosti, this restaurant is also one of the three stars where it is most difficult to book.

The climax to the route of the three stars Spaniards put it in Dénia, in the heart of Alicante, where Quique Dacosta exercises his culinary teaching in the homonymous restaurant and where the price of the Cocinar Belleza tasting menu goes to 250 euros per person and, if we want pairing, we must put another 150 euros plus.

What was the Holocaust and how to remember the victims?

How to know if a job offer is fake? 5 signs you should not miss