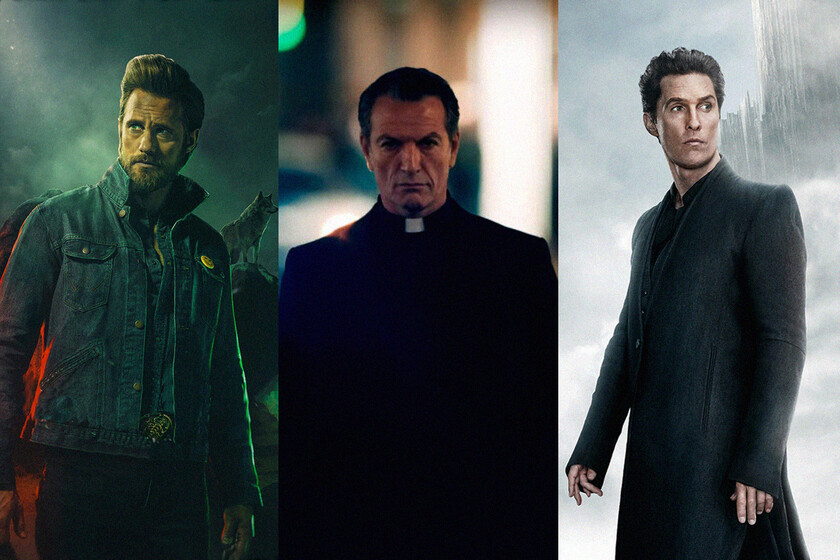 Could it be that two of the great horror series started in 2021 are connected in a common fictional universe? It’s not unreasonable. On the one hand, the Spanish ’30 coins’ of Alex de la Iglesia, which mixes all the director’s obsessions for HBO Max and, on the other hand, ‘The Stand’ in which Josh Boone adapts one of the great epic works of Stephen King, and that can be seen in Spain through Starzplay.

Cosmic horror is increasingly present in television fiction. We have been able to see it in the last season of ‘The Chilling Adventures of Sabrina’ (‘The Chilling Adventures of Sabrina’, 2018-2020) after having verified it in 2020 with the adaptation of ‘Lovecraft Country’ (2020) produced by jordan peele Y JJ Abrams. ’30 Coins’ also takes Providence to an empty Spain and ‘The Stand’ leaves some signs of knowing that, behind King’s fiction, there is a larger and unknown cosmic universe, which also connects with the writer’s myths.

In the case of the Álex de la Iglesia series, the connection with H. P. Lovecraft has more to do with lore generated around their stories than with these themselves, being the common denominator of much fiction labeled as “Lovecraftian”, from the ‘Hellboy’ comics to works like Alan Moore’s ‘Providence’, and in much also role-playing games such as ‘The Call of Cthulhu’ for which Álex de la Iglesia himself has written a module of the ‘Masks of Nyarlathotep’ campaign, an important fact if we consider the series also a campaign that could be included in the same game.


As the series reaches its misunderstood episode 8, the season one finale, among its many revelations, Vergara asks Angelo, the demon played by Cosimo Fusco, to show his true form, the monster that appears is basically a recreation of Nyarlathotep, the creeping chaos, one of the primordials of Lovecraft’s Cthulhu mythos, which confirms that the Cainite ally is an avatar in human form, thus connecting the cosmic with the Catholic in such a way that the demon of Judeo-Christian tradition may be an extension of primordial gods.

Nyarlathotep is a god with multiple forms or avatars, one of his missions is to confuse humanity and he serves as a kind of spokesman for other outer gods. The form in which it appears in chapter 8 is the so-called “Bloody Tongue”. Spawning is a translation of RPG logic, so it serves more as a “sanity check” for heroes than combat.. The being does not seek to destroy but corruption, he appears before Vergara as a mass of condemned in the fire, and allows him to see himself among them, to make him believe that he has no salvation, he knows that his weak point is guilt for the Giacomo’s death.

There are a number of quoted forms of the being that may have appeared in the series, such as the mist, or even Hitler, but one of his avatars, Nyarlathotep is a tall man, who seeks to gather followers through his miracles and delights in causing fear, madness and suffering to mortals. He even interacts with them resorting to deception, so that they help him, as can be seen with Antonio, even Santoro and the rest of the town, whom he converts and zombifies with black hosts, playing the opposite of God, mocking imitating and perverting their rituals, like the inverted cross, which makes an appearance again.

Read:  When will Venom: Liberated Carnage premiere in Mexico?

The Apocalypse according to Nyarlathotep

In ‘Apocalypse‘ (The Booth, 1978) from Stephen King , the diabolical character who gathers followers in Las Vegas, is called Randall Flagg, but in reality we know very little about him, except that he is “the devil”, or some kind of demon. What we do know is that, among other names, he was known as Nyarlathotep. It may just be a wink from King, but the truth is that although Flagg is very powerful, his way of acting is deception; terrifies and confuses humans to join him, seeks corruption, fight against good by spreading evil.

However, King did not determine his greater celestial tapestry of monsters and gods until fully connecting them in his series of ‘the dark tower‘ (The Dark Tower, 1982-2012), in which we see that his man in black, the main villain is also Randall Flagg and the villain of ‘The eyes of the dragon’. In these books we are introduced as a necromancer described as “an accomplished sorcerer and a devoted servant of the Outer Dark. In Lovecraft’s mythology, Nyarlathotep is “the soul of the Outer Gods, and serves as an intermediary between the deities of the pantheon and their cults.

Flagg aims to bring down civilization through discontent and conflict in humanity. Nyarlathotep often takes on human form to gather devotees and wreak havoc by being deceitful and manipulative., even using propaganda to influence the works of men.

Although a ‘The Dark Tower’ book appears to give Flagg a human origin, the The fact that he is also known as the Man in Black connects again with the description of Nyarlathotep in Lovecraft’s tale “Dreams in the Witch’s House” and in ‘the Randolph Carter saga, where he is usually depicted as a dark figure wandering the world of men in human guise.

Free will and the fight for humans

Angelo and Randall Flagg’s connection can only be understood from King and Church’s knowledge of Lovecraftian mythology and how they both adapt them for their own thematic universes. The of ‘30 coins‘ follows the most classic theological connection, placing Angelo as an emitter of evil that can be seen as the traditional demon that we know, since there is no other outside God that has had the ability to enter the human world, so that is all we can know.

As such, the demon is an angel who according to the lore of ‘30 coins‘ wants “his share of the credit”, so he somehow co-exists with good, since god’s plan is to let evil exist in order to make sense. That is why Angelo’s power, like Randall Flagg’s, is limited and plays with antagonism, letting the man choose. funny how both Flagg and Angelo tempt a jilted woman, Nadine in ‘Apocalypse’ and Merche in ’30 coins’ to achieve their goals.

The difference is that Merche uses her new position for her own benefit, while Nadine’s seduction is also a platonic undoing. In the second season of ‘Castle Rock‘ there’s a figure associated with Flagg who serves as a cult creator, leading to a very similar climax to ’30 Coins’ where, by the way, his monsters are often seen with spidery features, something in common with the deities of Stephen King’s macroverse, whose scarlet king or the creature from ‘It’ they are also shaped like spiders.