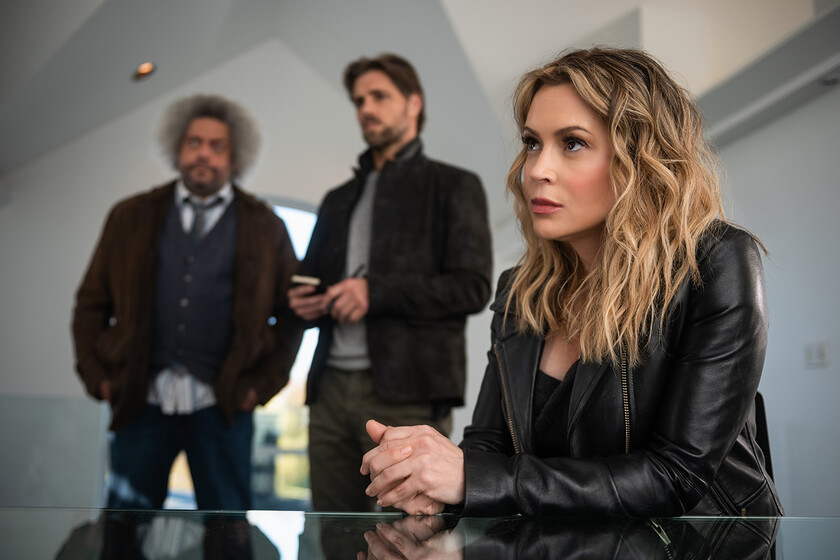 If you have already seen it, you may be wondering how it is possible that Alyssa Milano’s new movie is at the top of the most watched on Netflix. It premiered on January 13 and has already been placed in the top positions.

Based on the novel trapped by Nora Roberts, this romantic thriller stars Alyssa Milano and Samuel Page and it has become the most watched movie on Netflix, but why?

It all starts when Grace (Alyssa Milano), a famous mystery novel writer, returns home with her younger sister Kathleen. The youngest of the family lost custody of her son and now she wants to get her back, but then she turns up dead in her house and the secrets begin to surface.

She, as pretty as in charmed, insists on wanting to solve her sister’s murder, and the hot inspector (with whom she has a thing before the whole investigation begins) makes an effort to remove her from the case although, surprisingly, he does not succeed.

It’s a good movie? I’m not going to fool you, it’s not. Is a guilty pleasure manual, but that is precisely why it has risen so quickly on Netflix, because you just need to sit in front of the TV and watch the next hour and a half of your life go by unnoticed.


Beautiful people, some eroticism and mystery, as happened with the María Pedraza series, toy boy, although this time there is much less sex. The format works for Netflix and that is why it is likely to suggest it to you, because the algorithm “offers” you what it thinks you might like.

Read:  amazing trailer and release date of season 3 and finale of the Mexican Netflix series

You enter the application and see that there is a new thriller on the cover of your account and you fall. And then you see the low quality that suggests this was a telefilm that was never meant to land in theaters. Terrible direction, Razzie-worthy performances, and a nonsensical story with a really bad script.

Another option is that you have come to it in search of something to see. When there is so much content (this movie is just one more example that Netflix sometimes cares more about quantity than quality), it is possible that choosing something from the top is the easiest option, so if you want to see a movie, you choose the top 1. But beware, even if it appears in the first positions it only means that the movie has started to be seen, not that it has finished. Whether or not the public decides to finish it, Netflix does not confess that.


If you just want to switch off your brain and even have a laugh, Without shyness can be that guilty pleasure what do you need. If, on the other hand, you are looking for some good cinema, run away, because with this film you run the risk of feeling that you have wasted an hour and a half of your life. It’s up to you.

Eight little-known corners of the world, as beautiful as they are disturbing, that seem from another planet (and that can be visited)

“That of selling sweets was in the past”; school entrepreneurship grows

Miami and New York currencies sink despite the mayor’s support

Xbox Game Pass games announced for the end of May 2022

How much time do you spend daily connected to the Internet?