Bullfrag
Home Technology Automobiles Honda presents its technologies for the goal of 0 victims in traffic... 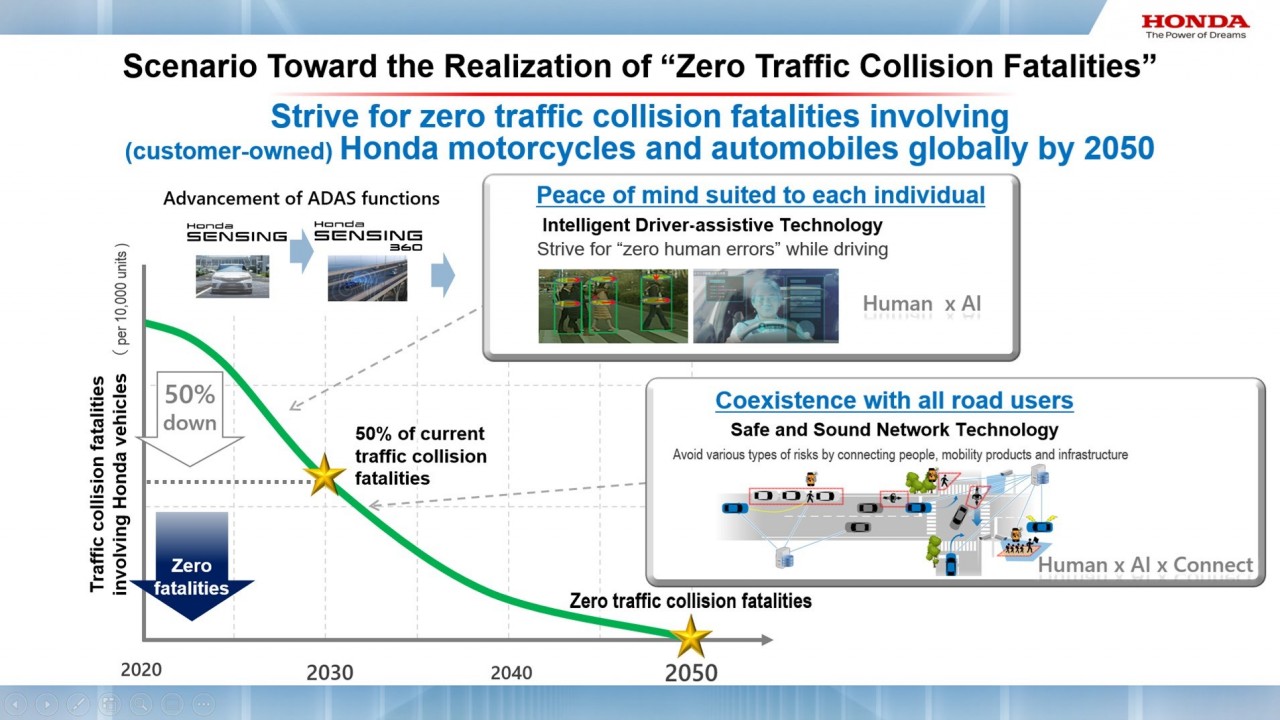 The Japanese manufacturer has announced ambitious targets for the near future. In the long term, 2050, aspires that no customer of a Honda car or motorcycle suffers a traffic accident. Few manufacturers have committed to that level of security.

Sling wants to transform in a profound way for the future, expanding its sights beyond private vehicles and entering areas such as robotics, software, space exploration, etc. But it does not abandon private vehicles, indeed, it aspires to a society free from road accidents, on a planetary level!

From the first Honda ADAS systems we move on to the new generation Honda Sensing (2014), which will be replaced by the omnidirectional version Honda Sensing 360 (2022). It’s a step forward blind spots are eliminated in practice and risks are perceived in all directions.

The new Sensing 360 system prevents and mitigates impacts with other vehicles or pedestrians, alerts for traffic from a frontal crossing, warns of approaching traffic from behind, assists in lane changes and corrects the speed of turns with the cruise control activated. It’s all assists, not semi-autonomous driving.

But this is not enough. Over the decade, Honda hopes to cut traffic fatalities in half, reaching its eradication in 2050. This vision of safety for all includes motorcycles (making them more visible, and alerting their drivers), and is for all world markets.

To avoid road accidents, it is essential to intervene in the human factor, eliminating errors in driving. For this Honda will develop the Intelligent driver assistance technology, which can anticipate your mistakes, for example by detecting drowsiness or erratic driving patterns.

It will not be a detective or corrective system, it will also be anticipatory, and therefore more effective

Vehicles will be able to constantly correct the use of controls, thus reducing risks. Communication with the driver through his senses: sight, touch and hearing will also be emphasized. The driver will be able to see a warning of risks, perceive alert sounds and be warned with stimulating vibrations in his seat to wake him up or reduce his fatigue. The cognitive state of the driver will be taken into account.

Read:  New spy photos of the Mercedes EQE 2022, the second electric is uncovered

Not only that, Honda will do its part to accelerate a public-private partnership for a global security system that affects all road users. In this way, information can be collected that anticipates possible risks. The system will be able to carry out simulations of the possible consequences and anticipate the corrections.

Under this vision, not only do mobile vehicles contribute to cataloging possible risks, also do pedestrians with their mobile phones and even surveillance cameras. All connected users will be able to receive alerts, which also benefits people who do not have a Honda. The manufacturer calls this Safety Net Technology, or Safety Network Technology in English.

This approach is a twist on communication. V2X, between vehicles and infrastructure, and V2V, vehicle to vehicle. For this, it will be essential to have fast, reliable data networks with minimal delay, for which both 5G and IPv6 already exist. The goal is safe mobility for all, true freedom of movement.

This announcement is based on technologies that do not exist at the moment and that have only been raised at a conceptual level, but reaching an operational and commercial state is not that far, given the pace at which things are going. Honda research reaches down to brain wave and behavior analysis for technology to understand people, they are spinning very fine.

In summary, the vision of loss ratio 0 for 2050 is based on two pillars, security adapted to each person, as well as the safe coexistence of all road users. From the sayings to the facts there will be gaps, it is a somewhat idyllic vision even if technology is blindly trusted. However, it is positive that Honda has such an ambitious vision, which will surely save lives

General Motors announced in 2018 its triple zero vision: no accidents, no emissions and no congestion. Continental glimpsed something similar a few years earlier: zero victims, zero injuries, zero accidents. Additionally, Volvo announced in 2016 its 2020 vision to eliminate fatalities in its brand’s cars. Welcome are these initiatives.