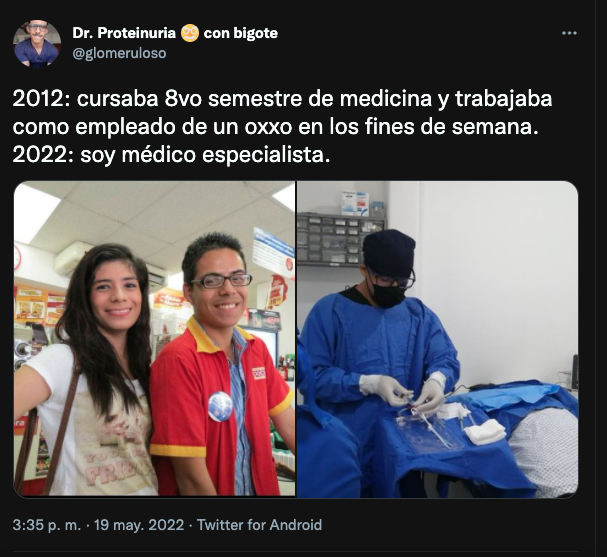 It is not a secret that university is a complicated stage because of everything it represents. There are too many demands that translate to sleepless nights and multitasking. In addition, the economic part must also be considered because each semester a large amount of money must be disbursed. You must comply with the payment of tuition and the purchase of books. So, the story of an OXXO cashier who is now a specialist doctor has triumphed on social networks.

In this case, the internet fulfills multiple functions. At present it is estimated that 4.95 billion people use this tool. The figure represents 62.5% of the world population and the trend continues to increase.

At the same time, it is a powerful tool that knows no borders. With just one click it is possible to stay informed of what is happening anywhere in the world. Some take the opportunity to learn the stories in real time and others to tell personal anecdotes.

Index hide
1 An example of life for all
2 How much does it cost to study Medicine in Mexico?

An example of life for all

In this case, the user @glomerulous He posted a comment on his Twitter account that has had a strong response. Until now, she has accumulated more than four thousand RTs and more than 66 thousand likes. It consists of a brief story in which he tells how he went from being an OXXO cashier to becoming a medical specialist.

Based on his testimony, he comes from a humble but hard-working family. He acknowledges that he never lacked for food but he did not have luxuries either. But instead of seeing his financial condition as a barrier, he took it as an inspiration to get ahead.

When choosing to study Medicine, new challenges began. One of the main ones was to find a job that would allow him to earn income to pay for his studies. All of this led him to become a cashier at an OXXO on the weekends.

Read:  the 5 keys to success

Instead of feeling ashamed, he affirms that he is proud of his past because everything has worked for him to get to where he is today. A decade ago he was not only able to finish university but also residency and today he is a happy specialist.

2012: I was in the 8th semester of medicine and worked as an employee of an oxxo on weekends.
2022: I am a medical specialist. pic.twitter.com/b5RWDalseR

His words can be seen as a motivation for everyone who aspires to be a doctor but thinks it is very difficult. Actually all races are complicated but not impossible. In each one there will always be drawbacks but with enough conviction and effort it is possible to overcome all barriers.

How much does it cost to study Medicine in Mexico?

On the other hand, something that you know very well is that a Medicine degree is not exactly cheap. In public universities enrollment is minimal but one of the problems is that there are very few places available. For this reason, young people must resort to other alternatives such as private schools.

In this regard, the Universidad Panamericana is listed among the best to study medicine in our country. Although to get an idea, the registration payment for new income or for the consecutive semester is 11 thousand pesos plus five monthly payments of 10 thousand 700 pesos. That gives a cost of 64 thousand 500 pesos per semester.

When taking into account the four years of the career within the institution, a total of 516 thousand pesos is obtained. But you must also take into account that one year of internship and another of social service are missing. All of the above only represents the right to be able to study and belong to the institution. In addition, you should also contemplate the purchase of uniform, books and material that you need to enter Medicine.

Tec de Monterrey will open School of Medicine in Querétaro