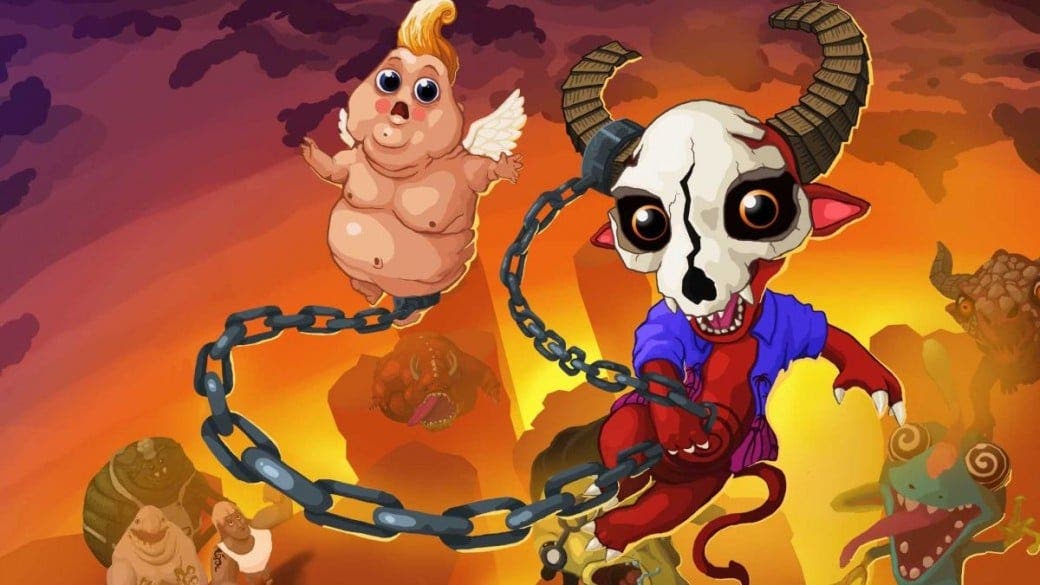 perform this Hell Pie review it’s been fun. It is one of those games that offer you a playability that complies and that is also full of humor in the middle. Hell Pie is a 3D platform game in which you embark on a rather wacky adventure looking for the ingredients to make a birthday cake for Satan. Each of the levels you’ll come across is overflowing with creativity and quite charming, in its own way.

One of his main charms is his black humor, which overflows and often surprises you with jokes that go far beyond their cruelty. Otherwise it is an entertaining 3D platform game and that it will be an interesting option for those who enjoy the genre. As it is an indie, it will not be free of problems, bugs that can sometimes be a bit annoying or mechanics that do not work as well. But in general the game works very well.

An adventure through hell and more

Our Avatar is called Nate and he is the demon in charge of bad taste. He is a rather curious cartoonish character: he “works” at Sin Inc. without taking much care, until Satan personally asks him to be in charge of making a cake for his next birthday party. After a short introductory phase where you are introduced to your fellow adventurer, a rather ill-fated cherub, you set out on your adventure knowing that your failure will mean a horrific death.

It’s a platform game, and that means your avatar can jump, double jump, and take short strides. In addition to this you have a partner that will give you more mobility options. With the help of your little partner you can extend those movements. It is basically an anchor point in the air that is used to swing from one side or the other and reach areas that are difficult to access.

You will have much more to do. Each level of the game will give you a list of collectibles to find, which will not be few, and which will also have a good reward. This stimulates the exploration of the levels as well as the effort that is put into improving the ability to handle the powers of the character, since sometimes it becomes quite challenging.

The collectibles offered by the game are many and range from meat cans to golden cats, and much more. These collectibles are usually hidden in places you wouldn’t get to just by walking. In fact, you will have to learn to use all the mobility options offered by your avatar to achieve them. The payoff for this will be all sorts of new powers.. Although not with all collectibles.

The cans should be your target because the accumulation of these is what will help you advance in Nate and Nugget’s skill tree, the cherub. For example, initially you will only be able to swing from your cherub once. But you will be able to upgrade this to swing five times. To which you can add your other skills that will allow you to advance through part of the stage without touching solid ground for a long time. Which ultimately will make the game much easier.

Read:  over a million illegitimate accounts have been removed

Last updated on 2022-08-12. Prices and availability may differ from those published.

Another collectible to look for is the unicorn sheep that spawn around the terrain. This collectible is related to a ritual that is part of the black humor of the game and that it can touch sensitivities because of how cruel it is. Each sheep must be sacrificed on an altar and after adding a good amount of horns you will receive new powers that include guide to places of interest, the central levels, sprint at super speed, knock down walls and shine in dark places.

As I have already said throughout the analysis of Hell Pie, a key element of the game is its humor. While the game design in levels and such would be for everyone, the humor is not. Hell Pie is a very raw game. The humor of this title is full of references to gross things and a lot of gore. And this can be a barrier for those who really get to enjoy the game. I found it quite funny because you don’t normally find this in video games.

I could almost say that it is refreshing as an experience. But then again, if you don’t like this kind of humor, Hell Pie might not be your game. Also, the game is full of creativity that explodes humor, a little more moderate now, in the level design. Each more linear sublevel has a theme, and none disappoint. From psychedelic drugs to the inside of a whale full of nasty stuff. No two levels are the same.

The best way to end this analysis of Hell Pie is by delving into his faults. We can start because if you try too hard looking for collectibles, by the middle of the game it will be easier for you to meet the challenges, then you will have unlocked most of your powers. Also, while most of these skills are pretty useful, late in the game, when you can grab almost anywhere without breaking a sweat, the new skills you unlock can be pretty underwhelming.

On the other hand, there are errors. One of the bugs that I found and bothered me a lot was in one of the initial levels, inside the whale, in an area where I had to climb a tube, the avatar got stuck. I had to restart the level to remove that bug. And in the same area I found a quite annoying mechanic and it is that in a certain sector, when dying the obstacles were remade. But the checkpoint was in the middle of those obstacles, so I had to go back to eliminate them again and move forward again, fatal.

With everything, Hell Pie is a great experience for those who enjoy 3D platform games. It has some things that aren’t for everyone like its crude humor or a lot of the game design being based on getting collectibles to make you better and more powerful, but in its 8-12 hours of gameplay, Hell Pie manages to be a pretty decent game. and in some ways quite special. His mistakes take their toll, but the end experience is pretty good.