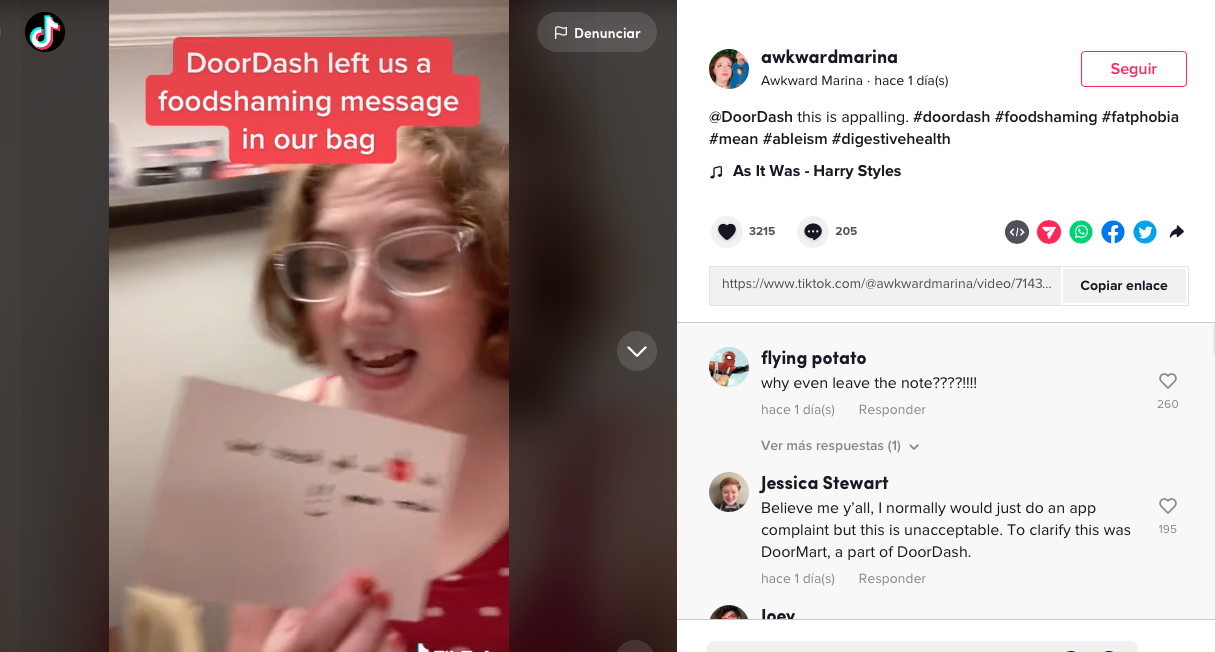 Social networks have become the best communication window for people with the rest of the world, which is why we can find a lot of content on these platforms. This is the case of a woman who shared her story on her account on the social network TikTok, after ordering fast food for delivery and receive it with a “fat-phobic” note.

We are what we eat. That is the phrase that many people repeat, but very few apply it. Obesity is a serious public health problem because it is an important risk factor for noncommunicable diseases, which are the ones with the highest burden of morbidity and mortality in the world.

The World Obesity Atlas 2022, published by the World Obesity Federation, shares a very worrying panorama for global health, It details that one billion people globally are overweight. Likewise, the report reveals that one in five women and one in seven men will be living with obesity by 2030.

For its part, World Health Organization (WHO) estimates, indicates that in 2016, some 41 million children under the age of five were overweight or obese. While overweight and obesity were once considered a problem in high-income countries, both disorders are now on the rise in low- and middle-income countries, particularly in urban settings.

According to a British study published in the journal ‘The Lancet’detailed that the researchers analyzed data on the tendency to be overweight in 188 countries, where the United States, China and India lead as the most overweight countries.

A woman shared on her account on the TikTok social network that her order from DoorDash, an American company that operates a platform for online food delivery, came with a note criticizing her for being obese.

The user, who goes by the name Marina, criticized the food delivery service after finding a personal note on the bag of junk food she had ordered, which read “An apple a day keeps the doctor away” next to an apple.

In the video, he shared that he ordered a bag of Cheetos, a box of Delimex taquitos and a Dr. Pepper from DashMart, a subsidiary of DoorDash.

“This is food shaming as fk, fatphobic as fk, capable as fk, and so inappropriate. If you are delivering someone’s food, why are you going to judge him?” Marina said in the video that records more than three thousand interactions.

Before the video of the young woman, many Internet users responded with negative comments against the delivery platform, for offending people with those kinds of notes.

“Literally it would have been effortless for them not to leave that note,” reads one comment.

“That’s crazy, especially since they don’t know what situation someone is in,” another netizen noted in the video.

“They shouldn’t be doing ANY trial period,” reads another comment.

For its part, the consumer’s complaint reached DoorDash’s customer service, which told The Post that they are investigating the incident and believe it was a mistake.

“We routinely include thank you notes with DashMart orders in our efforts to surprise and delight customers. Unfortunately, this customer mistakenly received the wrong note that was meant to be included in another order. We sincerely apologize for this confusion and are reaching out to make things right,” a spokesperson said.

It is not the first time that obesity has been a topic in many industries, as an example in 2021, when Nike was heavily criticized for a campaign promoting being overweight.

This is how social networks have opened many exposure sales for people to share all their thoughts.

Fast food in Mexico; this is how the culture of massification grows