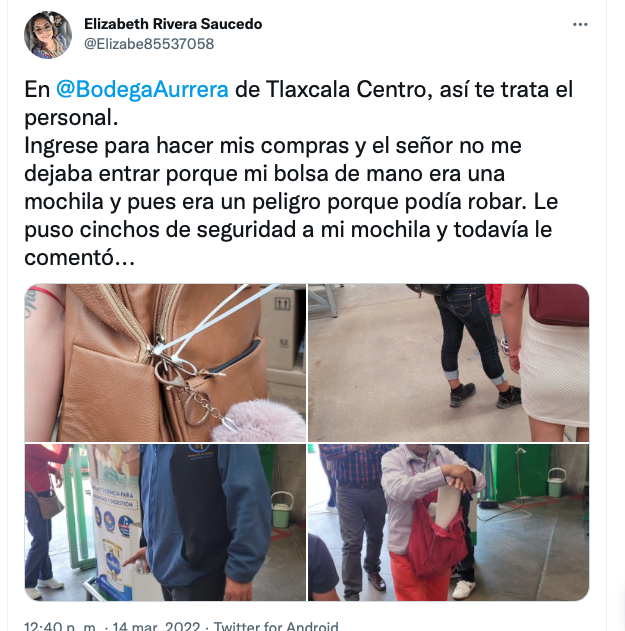 Social networks have positioned themselves as one of the most used windows in the world. Today there are many people who use these platforms to denounce the bad service they receive from a brand they consume, exposing these firms to the digital pulse, as was the case of a user who exhibited Bodega Aurrerá for putting a strap on her backpack to enter the store.

According to data from Statista, social networks has approximately 3,000 million Internet users who regularly use social networks. in addition the platform pointed out that this is a figure that is also expected to continue to increase gradually based on the parallel increase in mobile device users.

Through the social network Twitter, a user denounced the mistreatment he received from a guard at the Bodega Aurrerá retail store by placing a “cincho” on him in her backpack to let her into the branch.

The Internet user identified as @ Elizabe85537058 narrated and showed with various photographs the bad experience she had in the store. The young woman assured that she went in to do her shopping in the store as usual and the security guard did not let her in because her handbag was a backpack and for the security employee “that was a danger because it could steal.” So he put a safety belt on it.

Likewise, the Internet user explains that in the store there were other women with backpacks like hers, but they did not put the safety belt on those other consumers, so she was offended by the treatment of the firm’s employee who assured with her action that she was a “thief”.

On @BodegaAurrera from Tlaxcala Centro, that’s how the staff treats you.
I went in to do my shopping and the man wouldn’t let me in because my handbag was a backpack and it was a danger because I could steal. He put safety straps on my backpack and still told him… pic.twitter.com/rmXZK9tCGZ

“What criteria would you have used to make the decision to treat me like a thief?”he points out in another of the tweets.

to the parcel lady “BELIEVE ME YOU WILL NOT BE ABLE TO OPEN IT”
But there were more people with backpacks, and they didn’t have safety straps.
WHAT CRITERIA WOULD YOU HAVE USED TO MAKE THE DECISION TO TREAT ME AS A THERAPY?

This type of action is in addition to the one that many retail stores still apply and that They are very pointed out by the Federal Consumer Protection Office (Profeco), such as reviewing the tickets to its consumers who leave the establishment.

The anger of many of the consumers who have been victims of these actions of “security”, such as subjecting the ticket, or your belongings, to review, but this only reveals the vulnerable that establishments continue to be subject to ant theft, a phenomenon that impacts their inventory and income.

According to figures projected by Grupo Multisistemas de Seguridad Industrial in 2019, one of the latest data available on The ant robbery that is registered in supermarket stores reaches losses of up to 13 billion pesos annually.