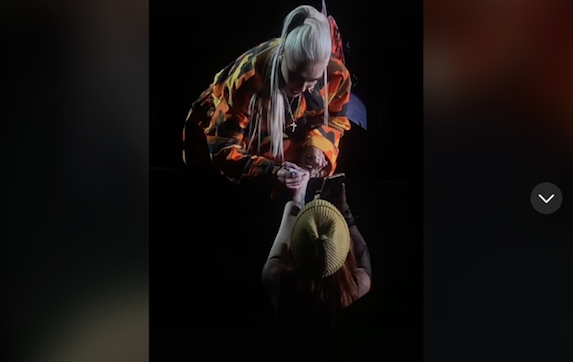 It happened in the last edition of the Tecate Emblema Festival, a fan asked Gwen Stefani for her autograph and ended up turning it into a tattoo.

A video circulates on social networks of the presentation of the former vocalist of No Doubt, Gwen Stefani, at the Tecate Emblema Festival, which took place last weekend at the already iconic Autodromo Hermanos Rodríguez.

The images detail one of the most exciting moments of the night and, in particular, the concert of the interpreter of “Hollaback Girl”since it is the experience of a fan who, somehow, manages to fulfill one of her dreams.

TikTok was the social network through which the story was shared with a video of just under two minutes, which, as if that were not enough, has already gone viral.

The clip starts saying “I met Gwen Stefani in Mexico and that’s how it happened”while, seconds later, he says that he lined up outside the facilities of the Hermanos Rodríguez Autodrome from nine in the morning to be up front, which he achieved.

It should be noted that, according to what is narrated in the video, the fanatic carried a banner in which she asked the singer to sign her arm, since she intended to tattoo her autograph.

Read:  "Are you okay?"; Chris Martin stops Coldplay concert for a fan

The moment arrived and Gwen Setefani approached the woman to sign her arm with the promise that he would actually turn it into a tattoo. And she did.

One day after the concert, according to what can be seen in the video, the fan went to get Gwen Stefani’s autograph tattooed, showing the result to all her followers.

The video on TikTok already has 426 thousand reproductions, more than 45 thousand likes and several comments in which the singer has been tagged in order to let her know what happened.

We made a promise @gwenstefani and here’s the tattoo! Love you. #gwen Stefani #tecateemblem #Mexico

TikTok has become that ideal platform for the new generations, to such an extent that, according to a CloudFlare report, since last August it has been in the first position in terms of global rating in terms of traffic, a trend that began in February of this year.

Also, if we talk about viralization and social networks, TikTok is the platform that has won the most users in this regard; The arrival of the pandemic was, without a doubt, the springboard that ByteDance was looking for to position its social network and bring it to the largest number of Internet users.

Such has been the growth of the Chinese social network that, currently, it already has more than a billion active users, very close to surpassing Instagram, owned by Meta, its main competition in the market that still dominates Mark Zuckerberg’s Facebook. .

However, 2020 and 2021 were, without a doubt, for TikTok, a social network that managed to capture the attention of users thanks to the ease with which a video can go viralas long as there is good content or creative content involved.

So you can get the new Commander Mancake skin for Fortnite for free, among other gifts thanks to Fall Guys