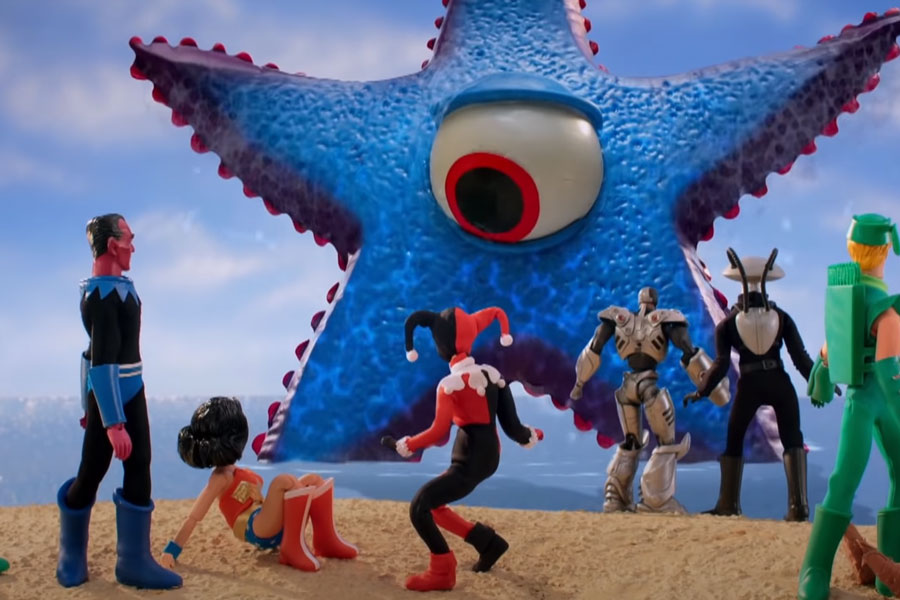 If you liked The Suicide Squad, you will surely want to know about Harley Quinn’s previous encounters with the conquering villain Starro.

When it was announced that the most evil starfish in the DC Universe would be the villain to beat in James Gunn’s The Suicide Squad, it struck many as strange. However, it was not so unusual to see Harley Quinn deploying her combat skills to face Starro.

Therefore, we recover two previous encounters between the Clown Princess of Crime and the first villain of the Justice League. They may seem like mere anecdotes, but they are worth it for those who like trivia.

In 2014 the second of the Robot Chicken specials dedicated to DC Comics characters was released. It is about 17 parodic sketches about the heroes and villains of DC, whose main chapter was the story “Starro Attacks”. Using the show’s signature stop motion technique and Mego figure aesthetics, the show features characters drawn from various eras of the comics, be it Hal Jordan from Emerald Twilight or Aquaman from Super-Friends.

In the aforementioned sketch, there is a confrontation of heroes and villains on the beach, including the Classic Harley Quinn, until Starro appears and they all face him with a surprising ending that we show you below:

Another noteworthy anecdote is the death of Joker at the hands of Harley, in which he represents one of his first revenges against his former toxic boyfriend. In addition, the end of the clown is a reference to the death of Jason Todd in “A Death in the Family.”

In 2018, the pages of Harley Quinn # 42 featured the story of Old Lady Harley. With a clear reference to Old Man Logan and Mad Max, it is a post-apocliptic story of a future resulting from an attack on Earth by Brainiac 5.

Read:  The details that made the Secret Wars a Marvel classic

Surprisingly, we learn that in this dystopia, Starro the Conqueror has been president of the United States for two terms, and that his policies led to the outlawing of prejudice, intolerance, and discrimination.

The battle at Corto Maltese: HArley Quinn vs Starro

If you have already seen The Suicide Squad, you will know about the incursion of the anti-hero team to the island of Corto Maltese to end the “Star of the Sea” project, which is nothing more than the captivity of Starro to seek to take advantage of his powers for the purposes of American government.

And at the end of the film, the few survivors of the Squad must face the space villain, but it is Harley Quinn who finally manages to defeat Starro, in the most memorable showdown between these characters yet.

Search now in our online store:

IS AN ULTRA-PROCESSED VEGAN DIET HEALTHY?