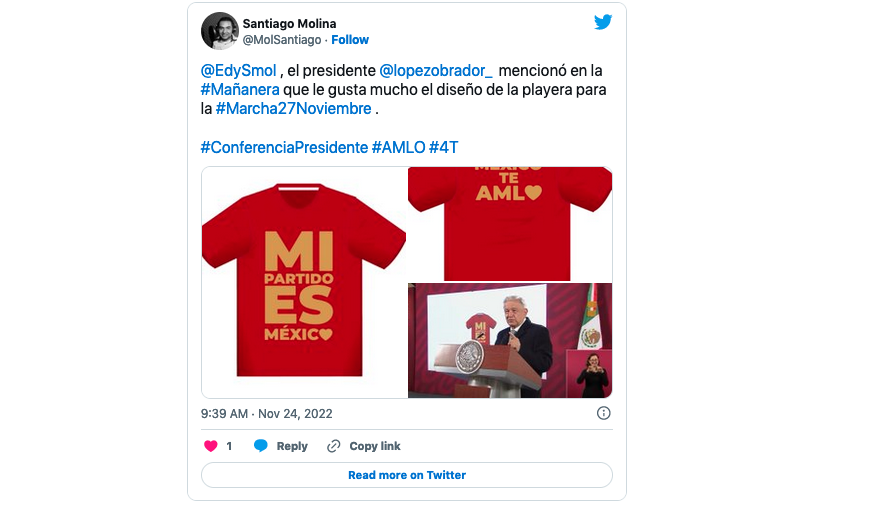 The outdoor environment, graphic design and the act of going out into the streets have become commonplace in traditional media strategies, which must find a growing opportunity for communication in this space, thanks to basics that have existed for years in the market. and that we can confirm with two cases, the first, a T-shirt viral in networks responsibility of edy smolwho released his graphic design for the March summoned by AMLO and the second, a campaign that Pepsi commissioned and that was carried out by Kendall Jenner.

Based on a survey of ipsosthe firm was dedicated to to size How they considered the protests that have arisen in large markets such as the United States, based on the media where the interviewed audiences saw them.

The firm found that most found such protests calm when they saw them reported on MSNBC or CNN, while most of those who found them negative reported seeing them on Fox News.

From perception to design

Communication is everything in any activation such as a demonstration, we have already seen that it depends on the medium, the perception of a march is positive or negative, according to an investigation by Ipsos. Graphic design plays an important role in communication, because through graphic coding it is established how important the resources thought in this matter are.

@conejita.chaira Edy Smol designed this logo, for anyone who wants to use it. #amlovers #andresmanuellopezobrador #4t #chairos #bunnychaira #amlo #AMLO #amlopresidente ♬ Can’t Get You out of My Head (La La La Remix) – System Society

When it comes to design, a very important aspect that develops in this matter is the digital medium as a detonator of its reach in communication. An example of this was recorded when Edy Smol supported participation in the march called by the president Andres Manuel Lopez Obrador releasing a design for t-shirts, which he said could be applied to all kinds of techniques such as sublimation of garments, in order to join the march.

The exercise he did of releasing graphic design for a t-shirt as a communication strategy in favor of a march and doing it through social networks can be understood based on studies such as the “BoF Insights from The Business of Fashion”, where it is recognized that the The third main reason to promote design through digital media is because it generates marketing and public relations.

The exercise of communicating through social networks is an important precedent of how brands are getting involved today with a consumer who takes advantage of these media, a design released to print t-shirts, communication through social networks and attendance at events, to feel belonging to an event and what this exercise undoubtedly reveals is the importance of graphic design in all moments of communication, from which a brand takes advantage.

Fainting is reported in AMLO’s march; Epigmenio Ibarra among those affected

“AMLO paid me for my Uber”: a Mexican woman documents her trip from New York to the march in networks