Alameda Research wallet receives $13 million from Bitfinex and other sources

Do you pay by card? They create the first virus capable of blocking ‘contactless’ payments and that’s how it works

Granny wins the heart of Harry Styles in concert 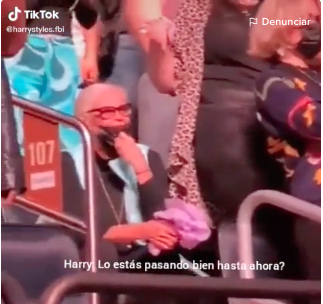 With the announcement of new dates for Harry Styles’ Love On Tour in Mexico City, Guadalajara and Monterrey, social networks revived a video of a singer’s concert where he notices the presence of an adult person and stops to ask him if you are having a good time.

The return of Harry Styles to the stage

Due to the health contingency, Harry Styles delayed his 2021 presentations, but in recent days the singer took everyone by surprise and announced the new dates for presentations in different places in Mexico and Latin America.

Let’s remember that with the cancellation of their previous presentations in the country, several fans bought their tickets, which will be valid and in case they no longer want them, they can request a refund at Ticketmaster.

So far, the return of Harry Styles has caused great excitement in the social media conversation and his music has reached every corner of the world regardless of the generation gap.

On TikTok, a video posted by a Harry Styles fan page went viral. The special thing about this video is that the singer in his act stops to ask an elderly fan if she is having a good time.

Noticing that the public figure prioritizes her well-being, the grandmother removes her mask for a few moments and gives an affirmative answer to Styles’ question.

“I’ll be looking at you,” he said to finish his action.

In the comments, reactions such as “do you know what envy is?”, “I wish most artists were like that”.

The growth of TikTok and its potential to share stories

TikTok – owned by Beijing-based tech company Byte Dance – launched in 2017 and according to Statista has become one of the fastest growing apps worldwide.

During the latent Covid-19 pandemic, the viral phenomenon was unleashed and users saw that telling stories was a way to generate content and generate views.

Today TikTok’s audience is young and used mainly by members of Generation Z and are characterized as heavy smartphone users in touch with trends.

Karley Ruiz is looking for a photographer; offers work for OnlyFans

Due to inflation, the price of beer and soft drinks rises

Decorate your living room with the best Netzhome home automation

Alameda Research wallet receives $13 million from Bitfinex and other sources

Do you pay by card? They create the first virus capable of blocking ‘contactless’ payments and that’s how it works

Gautam Adani has lost more than 100,000 million dollars, leaves the top 10 billionaires and is no longer the richest in Asia