Granddaughter fulfills this granny’s dream of knowing the sea for the first time, it was always her wish 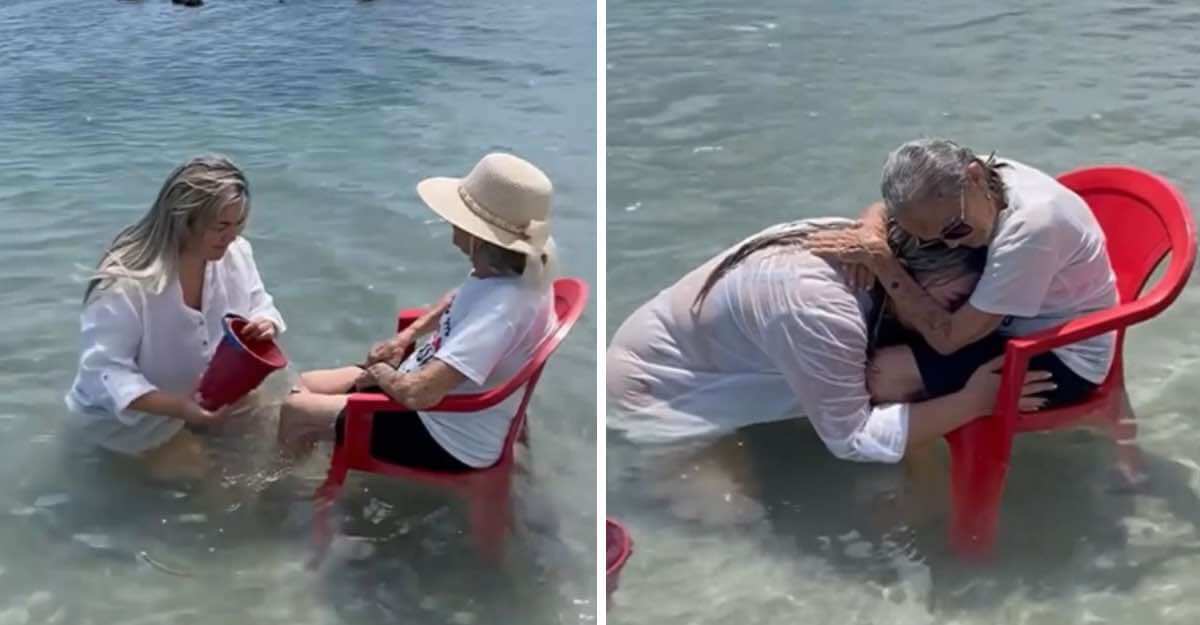 A granddaughter dedicated herself to obtaining enough resources to fulfill her grandmother’s great dream. Discover the beautiful story!

Grandparents are very important in the life of each grandchild, because from the first moment they give them all their love and make them feel protected. What’s more, they are in charge of doing everything possible so that they are full of well-being and do not miss anything.

On the other hand, they are the people who are in charge of transmitting the most relevant teachings and values ​​to each grandchild. Well, their intention is that they are safe at all times and have the best tools to function in life.

They also become one of the best confidants of the grandchildren. This because of they support them in every idea, they motivate them, they keep their secrets and provide advice.

Because of all these displays of affection, grandchildren grow up wanting to reciprocate their grandparents’ affection. For that reason, they determine that one of their most important goals is to be able to help them fulfill their most cherished dreams.

This is what happened with Tatiana Van Campo, a woman who managed to get her grandmother Teresa to visit the place she had imagined so much. Below we share the details of this exciting story.

The dream of knowing the sea

Doña Teresa is a 94-year-old grandmother who, since her childhood, had expressed that her great desire was to be able to bathe in the sea.. However, at this point in her life, she still hadn’t been able to make his dream come true.

As a result of this fact, her granddaughter, Tatiana Van Campo, worked hard as a teacher in order to obtain sufficient resources. She, well, stated that her grandmother deserves all the demonstrations of love in her life.

In this way, after gathering the pertinent resources, he traveled with his whole family to a beautiful Brazilian beach. That was how he managed to get his grandmother to finally see the beautiful journey of the sea live and direct.

There, he submerged a chair in the sea so that his grandmother could sit and enjoy the water as he had always wanted. Likewise, he began to wet her with a bucket so that they could enjoy the experience together.

In the same way, they began to splash around as if they were two girls. Well they were happy to be able to fulfill the dream that had been dormant since childhood.

In the midst of that beautiful moment, the young woman could not hide her tears of joy at taking her grandmother to the place of her dreams. Because of this, together they were moved and ended up embracing each other in the sea.

In this way, that day they lived one of the best moments of their lives. They not only managed to fulfill a dream, but they showed each other all the love they feel in their hearts.

This story went viral because the young Tatiana Van Campo posted a post on her Twitter account. Instagram. In it he told her that he loved her, that she was excited to see her fulfill her dream and that she would never forget that moment.

Due to this, the majority of Internet users were moved and began to share the video in a massive way. In addition, they congratulated Tatiana for her great affection, I respect and care that he has for his grandmother Teresa.

Look at the beautiful video posted by the woman on social networks:

The bond between a grandmother and a grandson is unbreakable. Well It is built with the purest love that both feel and feeds day by day.

In addition, the intention of both is to be happy, take care of the other and enjoy together. For that reason, they are in charge of looking for moments that will last in their memories for the rest of their lives.