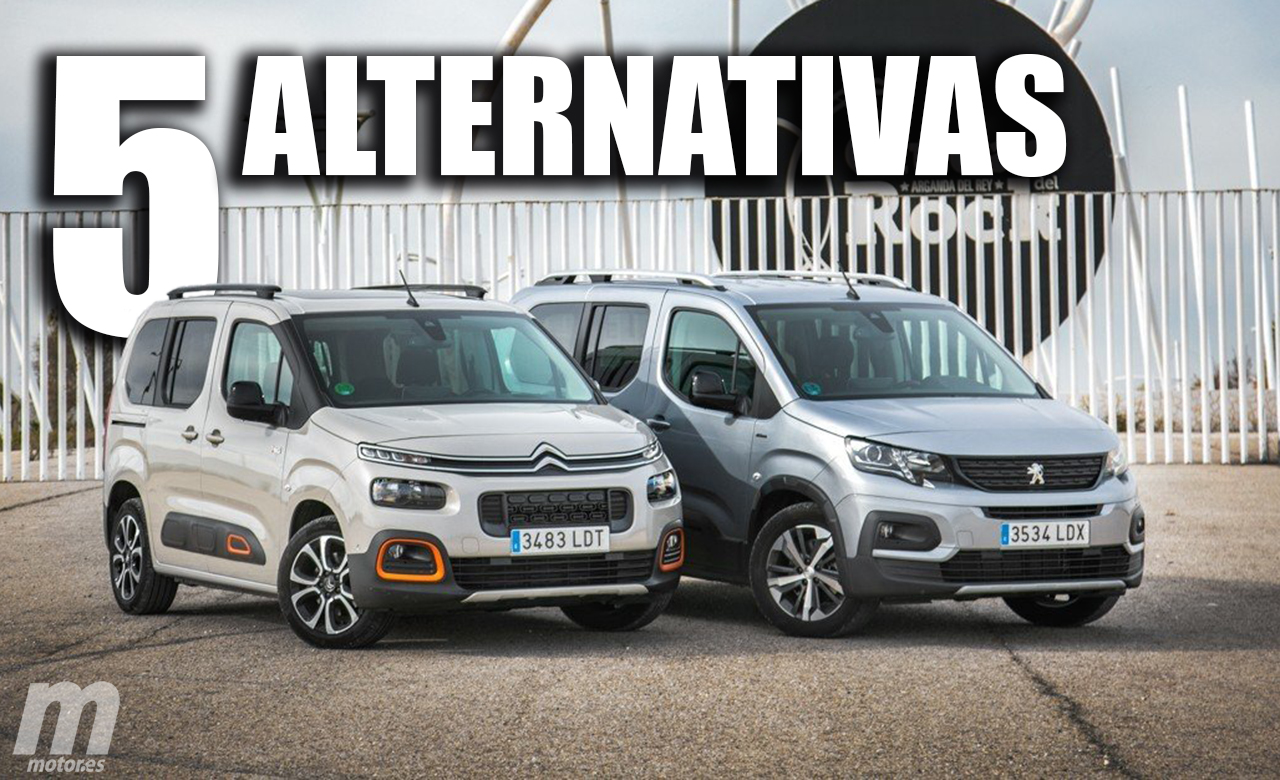 Stellantis has made the drastic decision to stop marketing its internal combustion engine passenger vans. Now that the Peugeot Rifter and the Citroën Berlingo with a diesel and / or gasoline engine will disappear from the market, it is the ideal time to make a compilation in search of valid alternatives to these successful models.

The fourth largest vehicle manufacturer in the world, Stellantis, you can boast of having some of the most popular vans in your portfolio. The Citroën Berlingo and the Peugeot Rifter are true best sellers in a competitive segment. All this without losing sight of the Opel Combo Life and even the Toyota Proace City Verso. That is why the decision made by said automobile group has generated a lot of controversy.

Stellantis has decided to retire the Rifter, Berlingo and Combo Life with gasoline and diesel engines. In other words, these passenger cars derived directly from commercial vehicles become available exclusively with 100% electrical mechanics. Taking into account that these models had been concentrating the bulk of sales in the European market, it is an ideal time to make a compilation of 5 Alternatives to Thermal Rifter and Berlingo. Some very valid vans that we must take into account for their level of practicality, comfort and safety.

We start our compilation by focusing on an interesting model that sports the brand’s insignia Ford. The North American manufacturer has in its range several vans that deserve our full attention. In this case, the choice is none other than the Ford Tourneo Connect. Although it is one of the most veteran models on this list, it does not deserve to be discarded for that reason.

The interior of the Tourneo Connect can be configured with five or seven seats. It offers a high level of versatility and practicality. In addition, it boasts the Fold Flat rear seating system to form a spacious cargo area. This makes this van an ideal mobility option for active families. The equipment is very extensive and typical of a conventional tourism.

The mechanical offer consists exclusively of diesel engines. There are 100 hp and 120 hp engines available respectively. The most powerful engine is available with manual and automatic transmission. Also noteworthy in the offer is the Active trim level, which gives the vehicle a ‘crossover’ exterior appearance. It is available at Ford dealers from around € 25,000.

If our budget allows it, we have the opportunity to opt for a premium option. The brand Mercedes has in its portfolio the recently renovated Mercedes Citan. A new generation van loaded with technology, which boasts a level of practicality and a varied mechanical offer. It is for sale in the Spanish territory and, our choice is, logically, the version intended for passenger transport, the Mercedes citan tourer.

Up to five adult passengers can travel inside the new Citan Tourer. The boot cubes a cargo volume of 775 liters. A figure that can be increased if the rear seats are folded down. In the technological equipment, the driver assistance systems, the headlights with LED technology and the complete infotainment system stand out.

The mercedes van it is available alongside a selection of gasoline and diesel engines. The power range starts from 95 hp to 131 hp. All engines are front-wheel drive and depending on the chosen engine, we will have the possibility to choose between a manual or automatic gearbox. The sale price of the Citan Tourer for individuals starts from € 25,270.

Read:  Goodbye to rumors about Newey and Aston Martin: renewed by Red Bull

The brand Nissan
has decided to redouble its commitment to the compact van category. The new Nissan Townstar It has burst onto the scene and is already on sale at Spanish dealers. A new generation model that keeps a very close technical relationship with the Renault Kangoo. It is supported by the CMF-CD platform and is equipped with advanced technology.

The exterior design, especially at the front, exudes its own personality. The grille and the light clusters refer to The version intended for passenger transport, the Nissan Townstar CombiIt has a cabin with five seats. The cargo volume reaches 3.9 m3.

The mechanical offering of the new Townstar consists of a 1.3-liter four-cylinder petrol engine with 130 hp and 240 Nm of maximum torque. Later, its 100% electric alternative will be introduced to the market, which takes the witness of the Nissan e-NV200 which, remember, was manufactured in Spain. This new van has a sale price that starts at € 17,110.

The Renault kangoo
could not be missing in this compilation. And it is that Renault has in its possession one of the reference models in the competitive segment of compact vans for the transport of passengers as well as goods. It was relatively recently that the new generation of the Kangoo was introduced to the market. A model that is up-to-date in terms of design, technology and maintains its commitment to electrification intact.

Inside of new Renault Kangoo Combi up to five adult passengers can travel. At the moment the new generation does not have a variant of seven seats. Predictably it will come later. The more equipped versions boast a 7-inch digital instrumentation and an 8-inch touch screen.

The gasoline and diesel engines with which the new Kangoo Combi is available comply with the Euro 6D emission standard. The power range ranges from 75 hp for the access option to 130 hp for the most radical alternative. Depending on the chosen engine we will find a manual or automatic gearbox. In both cases with front wheel drive. The starting price is set at approximately € 25,500.

Last but not least, we must mention one of the most popular German vans. The Volkswagen caddy. At Motor.es we have had the opportunity to put it face to face with both the Rifter and the Berlingo. It is a model that over the years has undergone great evolution and is currently, without a doubt, one of the benchmarks in the category.

The arrival of the new generation of the Caddy has brought with it very important news. The van of Volkswagen it is very close to the behavior of a car like the Volkswagen Golf. It boasts exterior design, technological equipment and a mechanical section made up of a wide selection of gasoline and diesel engines. The power range covers from 102 hp to 122 hp.

One of the great assets that the Caddy can boast of is having in its range of versions with 4Motion traction. In addition, depending on the chosen engine, we will find a manual gearbox or a seven-speed dual-clutch DSG automatic transmission. Is available in two body sizes
(Caddy and Caddy Maxi) and for both options you can choose an interior configuration of five or seven seats. The starting price of the Caddy at Volkswagen dealers is € 29,515.