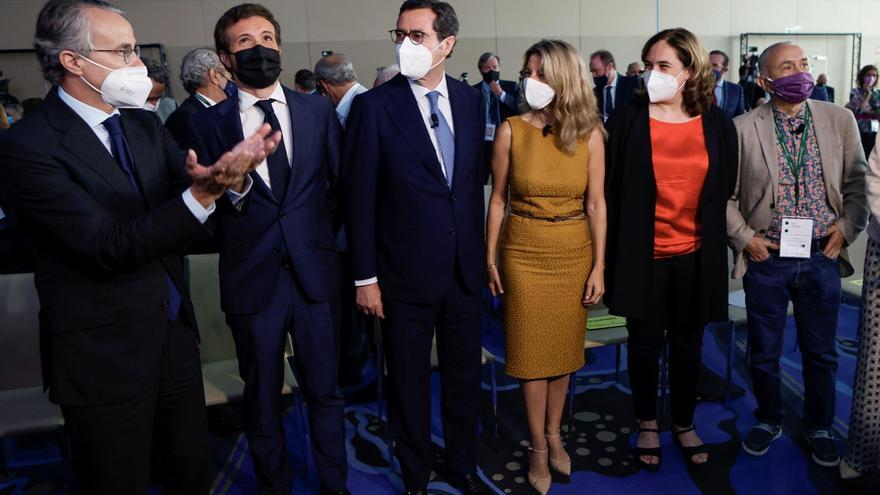 CEOE has a busy 2022 ahead. The year begins with issues that generate great internal controversy, such as the parliamentary processing of the labor reform and the negotiation of the minimum wage, and it will end with elections for president, because the four-year term of Antonio Garamendi, which began in November 2018, expires. And the current leadership will have to meet these challenges with two open fronts that have been affecting the internal and public life of the employers’ association for months now: the bad relations with the leadership of the Catalan employers’ association, Foment, and the bad relations with the leadership of the Popular Party. Two acts this coming week, a forum on Monday in which Garamendi and the leader of the PP will coincide, and the meeting of the CEOE management this Wednesday, will allow taking the temperature of these problems that are wearing out the bosses.

Are they two problems, or one? The CEOE leaders closest to Garamendi insist on the link between the leader of Foment, Josep Sánchez Llibre, and the general secretary of the PP, Teodoro García Egea, who would be joined by the figure of former popular deputy Vicente Martínez Pujalte, adviser to the former in the employer and political godfather of the second; but Foment and PP sources rule out coordinated action: “An alliance with the ‘hard’ PP doesn’t sound like a very smart step [Foment también tiene elecciones este año], and Josep is very intelligent & rdquor ;, assures a business leader close to the Catalan leader; “Sánchez Llibre and García Egea coincide in their dislike for Garamendi, but nothing more & rdquor ;, corroborates another associate of Foment; “It doesn’t make much sense, because I don’t see what we would gain by favoring one over the other,” explain sources from the PP leadership. The fact is that Casado’s party is using the internal divisions in the employers’ association to underpin its rejection of the labor reform, as detailed this Friday ‘The Newspaper of Spain’.

Index hide
1 Pacts and process
2 Foment, against
3 meeting on monday

The antipathies have been cooked for a long time. In the case of the popular ones, they have to do above all with two factors: the first, the ten agreements that Garamendi has closed with the Government throughout the legislature. “Instead of ‘waiting for mine to win,’ as the employers have done other times with leftist governments, Garamendi has chosen to agree, and that feel bad in the PP& rdquor ;, says an employer adviser. In this sense, the refusal of the PP to approve the labor reform resulting from the social agreement is consistent with its opposition to other measures adopted in recent months after an agreement with employers and unions, such as the pension reform or the ‘rider law ‘. But what really soured relations were the equivocal statements by the president of the employers’ association in June in which he seemed to approve the pardons of the procés: “it felt like a slap in the face & rdquor ;, they confirm in the popular leadership, and relations have never recovered from that pothole despite the explanations of Garamendi, who attributed what happened to an unfair misinterpretation of his words.

Nor does it help that the ‘popular’ that Garamendi has incorporated into his team are prominent exponents of the old PP, the one from the Rajoy era, instead of people closer to the current leadership: this is the case of the former Minister of Employment, Fátima Báñez (now president of the CEOE Foundation) or the former Secretary of State for the Economy, Íñigo Fernández de Mesa, who is vice president of CEOE and president of its analysis center, the Institute of Economic Studies. An example of this mismatch is that positions have not been coordinated between party and employers on labor reform, they confirm from the PP, despite the fact that Báñez was the promoter of the 2012 legislation that the new regulations are to replace.

In the case of Foment, the bad harmony between Garamendi and Sánchez Llibre comes “from the beginning, since they were elected to head their respective organizations [fue en el mismo mes, noviembre de 2018]& rdquor ;, affirms a business leader. Another president of a sector employer explains: “Sánchez Llibre was one of the four vice presidents of CEOE with the previous leader, with Juan Rosell, and since then he has been responsible for relations with the Cortes. But with Garamendi the number of vice-presidents increased to 11, and he is also much more active in his institutional relations: he directly leads the dialogue with the vice-presidents, with the ministers… Sánchez Llibre has lost power& rdquor ;, he assures.

Read:  IATA forecasts that the airline industry will recover in 2023, a year earlier than expected

But in addition to personal differences and the struggle for influence, the discrepancies affect substantive issues, of economic focus. They openly demonstrated when the leader of Foment was the only member of the CEOE management who voted against the agreement on couriers, last March, advocating keeping the ‘riders’ as self-employed against the rest of the business leaders – who gave their approval to the employment of the group -, and the content conflicts are now resurfacing with the labor reform.

Foment has not only been one of the four business organizations that abstained in the vote of the CEOE Executive Committee that gave the green light to the pact with unions and the Government, but also continues to insist on the need to review that agreement: among the business leaders close Garamendi was very upset by a Foment circular dated December 31 in which the reform is analyzed and it is said, regarding what was agreed on fixed-discontinuous contracts, that “it is necessary to suppress or clarify this modification in the parliamentary processing & rdquor ;; a wording that contravenes the official line marked by Garamendi, days before the end of the year, that the Courts should not change “not a comma & rdquor ;. The circular was disseminated at the Board of Directors of Foment held last Monday; Two of the attendees at that meeting affirm that the interventions supported the official line that Congress must validate the labor reform without changes, although they also admit that part of what was agreed was criticized, and above all CEOE was reproached for not providing information or documents territorial and sectoral organizations during the social dialogue process.

Next week is going to be decisive in evaluating how these conflicts are progressing: on Monday, Casado and Garamendi will debate each other on tourism in a business forum, with former popular minister Josep Piqué as moderator of the conversation. It will be the first joint public act in which the leader of the PP and the businessmen share the stage for more than six months, when they participated in the summer course of the organization of self-employed ATA: then, with the controversy of the procés very close , an icy Casado criticized before Garamendi as “a serious mistake” the pension agreement that the business leader was going to sign a few hours later with the President of the Government and the union leaders. Monday’s debate will allow us to estimate, therefore, from the tone and the gestures, if relations have been recomposed; PP sources bet that the meeting will be marked by “naturalness, without treating each other as great friends.”

In addition, on Wednesday the governing bodies of CEOE will hold their first meeting since the labor reform pact was approved. How did it progress?The Newspaper of Spain’, a show of support and support for Garamendi is expected (and is being prepared) after the criticism received from the right for agreeing on the new labor regulations with unions and the Government. The president’s supporters have a motion in favor of his management of the negotiation, an ovation or another formula that allows them to support the leader and show loneliness -they say- of Foment. “Just as in the PP there is an isolated critical voice like that of Cayetana Álvarez de Toledo, well here we have an isolated critical voice, that of Sánchez Llibre”, adds one of the CEOE leaders most critical of the position of the Catalan employers’ association and “with the PP sector that encourages business division”.