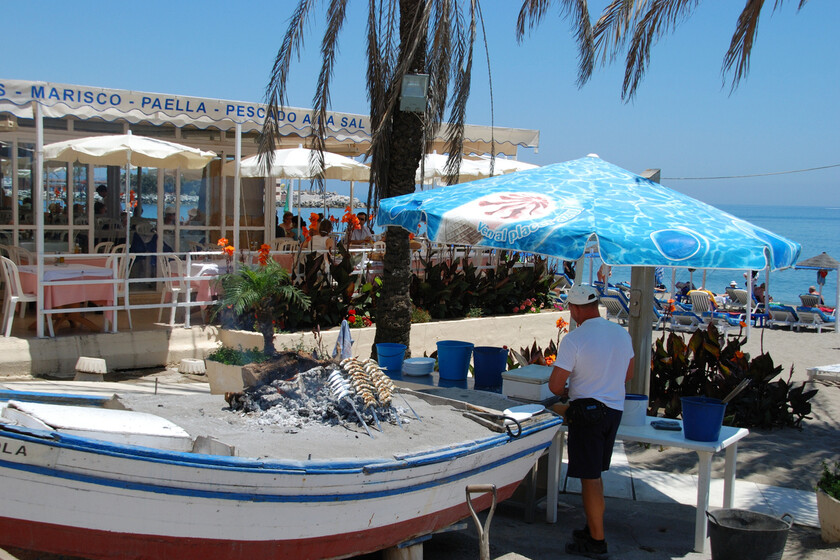 The best X-rays of Spanish customs and traditions are made on the beaches. Evolution or involution, that is the question, but approaching during the summer to any part of the national coast is the ideal option to take an overview of how we have been changing.

We have gone like this from going in a family flock to saturated places, Although it is still being done, with the whole house on our shoulders (umbrella, refrigerator, deckchairs, shovels, towels …) to imbue ourselves with a discovering spirit and chase deserted coves, carry little more than full pockets and take Instagram for a walk .

From the developmental Benidorm and the search for Swedish women a la López Vázquez, we come to the century of lights -and shadows- of social networks, digital recommendations and elusive movements with everything that had to do with the past.

Under this prism, Mediterranean beaches have been filled with a phenomenon as Spanish as siesta or flamenco: the chiringuito culture.

With its pluses and minuses, its terraces full of sand, its radios distorted into any FM, sangria and beer as connecting liquid vehicles, Its fryers fuming and with shouting commands, the chiringuito has been the longed-for El Dorado of the traveler for decades.

Nevertheless, the 21st century has other options for Chiringuito Paco (or Manolo, or Pepe, or put the name you want here), who still survives and fights against urban hits -of which he was also part- on the beachfront where the waiters are called “boss” or “child “and where the words reserve or dress code they do not enter the dictionary.

From tinto de verano and chopitos to champagne and oysters

It does not matter where we release our beloved Rodríguez, from the Catalan Costa Brava to the Andalusian Costa de la Luz, including both archipelagos (since neither the Canary Islands nor the Balearic Islands are exempt), only with the beaches of the Cantabrian coast a little freer from these fragile places, where the reed and ice cream cartels act as parapets, since there the climate does not favor the roots of this custom.

Thus, fish, some grilled recipes, a good dose of frying -not always elegant-, wet swimsuits, plastic chairs, loud music and cold beer became the unpretentious plan with which to let off steam when we moved from the towel, looking for a shade and a small patch of calm.

Few ambitions, affordable price (generally) and close treatment in a hospitality without pretenses but in the rush in which many of us have grown up and that now, when we are already more European and theoretically civilized, we repudiate as a symbol of a past that must not return.

Read:  The most recommended wireless mice

All this in a hodgepodge of accents and gastrofestive proposals that have little in common with past times and where now there are even signature proposals, signed by renowned chefs, when before the chiringuito cook remained in the most absolute anonymity.

Now there is Beach bars that cannot be entered with a bathing suit -Let’s say a wet swimsuit-, where the sand of the beach is no longer welcome when you walk through the door, leaving the classic terrazzo behind and succumbing to a fashionable tile and a decoration worthy of being published in a magazine.

Things have changed there. The chiringuitos have become premium and gourmet, both synonymous with posh, where the menus and culinary customs have also changed. We have thus parked the sangria and the tinto de verano for wine lists (generally onerous) and we have found menus that are no longer written on a blackboard with the six suggestions of the day, but are followed in seven PDF pages with a marine distribution that would make everyone pale. The little Mermaid.

Of the squid, the chopitos and the affordable sardines we have given way to caviar, the others and lobster (for those who can afford it), sowing suspicion and some envy on social networks when we indulge ourselves of throwing a luxury mojito and food in our own bed, as if it were a Roman bacchanal in which it is more important to tell where you are than the simple fact of being.

From Valdevaqueros to Marbella; from Sotogrande to Aguamarga; from Dénia to Formentera; from Cullera to Cadaqués and from Puerto de la Cruz to Maspalomas … Spain has become the first tourist world and Chiringuitos Paco will only survive in a hotelier Darwinism if they meet the good, pretty or cheap.

That, or evolve into Paco’s Beach Club, They kick the cassette, the hard loungers and the deep fryer and they trade it for surround sound, private beds and Moët & Chandon instead of their reds with soda.