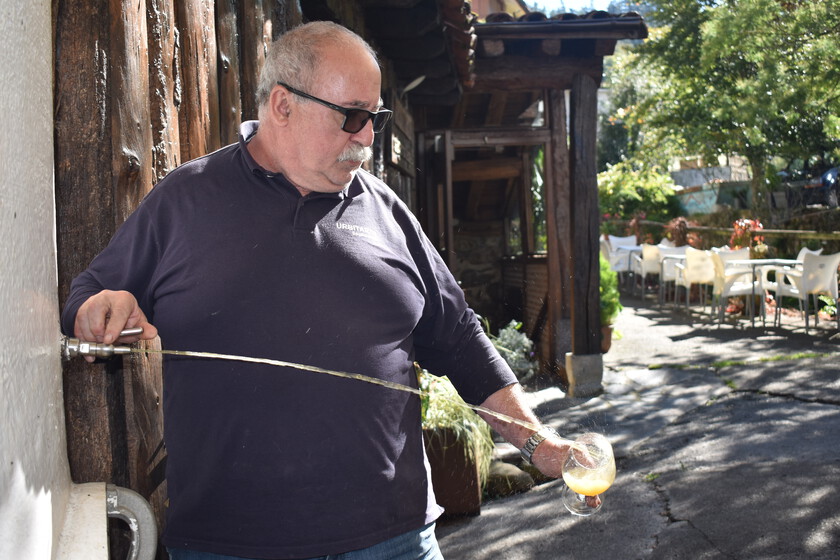 With the 65-year-old looming closely, many might think that Demetrio Terradillos, man orchestra in the Urbitarte Sidrería (in Ataun, a small town in the Goierri of Gipuzkoa) next to his wife Ixiar Irastorza, He’s counting down the hours to hang up the apron he’s struggling with on the grill and park his ciders.

Fortunately for the cider industry and for those who think that a sagardothegy (cider house in Basque) is only limited to the cider of the year, there is Demetrio for a while. He attends us on a busy weekend, ready to start the apple pressing and with the usual hustle and bustle on Saturdays where the grill also imposes its rhythms.

With the txotx season just around the corner (mark the month of January in red), this is when the cider houses wear the youngest of their products, many of them directly from the kupelas. At the table, txuleta, cod omelette and grilled fish mark the tempo of the bite.

To this comes Demetrio, who beyond his hotel nonconformity, also shows revolutionary in the way of understanding cider. “Why isn’t it going to be like wine?” He wonders. And he is not without reason, only that this seasoned barbecue and cider man demonstrates the movement by walking.

30 years ago he entered the world of cider, buying the facilities where he welcomes us today, in the heart of the Goierri valley in the longest town of Guipúzcoa, and since then it has not stopped innovating.

The national cider map changes a lot, a practical jurisdiction of the north of the peninsula, where we find the two most common versions: the natural and the champana (many times, artificially aerated). However, Demetrio opens a gap in this world proving that the cider can have some wine.

How the Basque cider is made

After unloading the apple, it is placed in this concrete rectangle and washed with a closed water circuit to remove dirt and leaves. From there it will go to the centrifuge and the press.

Surely we are familiar with winemaking, or at least some notions we have. Harvest, pressing, fermentation and aging they are processes that we more or less control or have ever heard of. Of cider, however, unless one has origins in the Cantabrian coast – or a lot of curiosity – we may not know that much.

How do you pick the apple? How do you wash? How do you press? How is it fermented? “They are collected by hand after beating [el verbo es potente, pero no es tan ruda la realidad] the tree when the apple is at its peak, “he explains.

For this they use the kizkia, a kind of shovel with which they pick up from the ground each apple and which is part of the usual style of the Basque countryside from September / October, when the harvest begins, until mid-November when it ends.

Once collected, it is transported in large trucks to the cider house itself. Logically, the transport is careful but not until the harvest ends of the grape. What does differentiate producers like Demetrio is having concerned with improving production processes.

“Went pioneers in washing the apple when it came, “he says.” Now everyone does it, but before nobody did it. This is how we remove leaves and dirt, “he says. For this they use a concrete rectangle where they deposit the apple for pressing,” about 4,200 kilos. ”

With a water circuit, they wash the apple and take advantage of a small current that the water generates to take it to a kind of centrifuge, where they remove excess moisture. “Then we go on to a manual selection where we remove the rest of the leaves and apples that are in bad condition.” Neither do so many people, but it is better for the product to be good, “he argues.

From there, to the press. “It is subjected to a top pressure of 80%,” he explains. It has shrinkage, of course. “About 4,200 kilos, which is the usual pressing, gives us about 3,200 liters of apple must,” he says. Everything else, waste that is not thrown away. 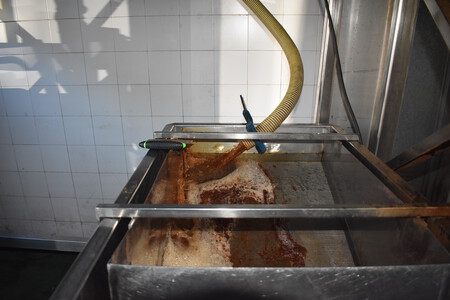 The resulting apple juice is flavorful and quite sweet. “Especially sweet this year”, explains Demetrio, who tells us how more and more apples have more sugar due to increased sunshine.

“The skins and bones go to cattle. Everything is used here “, he endorses in this ode to the circular economy. Once this must is ready -and it is really sweet, a lot- it is transferred to the fermentation tanks.” It ferments with its own yeasts, we do not add anything that is not come from the block, “he clarifies.

Two weeks of fermentation that take place, depending on the cider house, in different tanks, They can be made of wood, stainless steel or even polyester. There this double fermentation occurs. First the alcoholic, which converts sugars into alcohol. Later, although not always, a malolactic where the malic acid is converted into lactic acid. 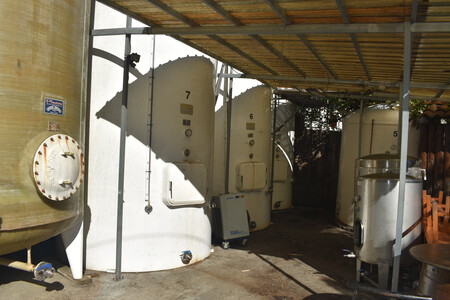 The tanks where the cider ferments do not differ greatly from those used in winemaking. Here they carry out their two fermentations: alcoholic and malolactic.

The result is, at that moment, natural ciders that have an alcoholic content of between 5% and 6%, with a natural carbonic tip and notable acidity. They could be drunk now, but they need some ‘taming’. Therefore, they are kept in deposits (which can be kupelas wood or stainless steel) where the cider will rest until January, date on which it begins to be bottled.

It is also the time of the txotx, the great cider festival, where people go here.tie the product of the year and from where it is then bottled. The tradition, which emerged as a cider tasting to see the state of the harvest, has become a gastronomic and tourism benchmark that puts municipalities such as Astigarraga, the town with the highest concentration of cider houses in Guipúzcoa, on the map.

From natural cider to cider aged in Michelin star casks 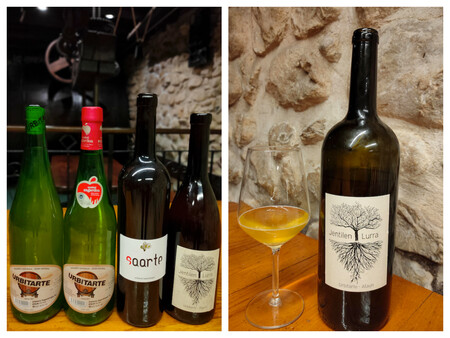 Natural cider and aged cider, both in the bottle and in the barrel, are proof that cider can behave like wine. © Tob Strategy.

This process equalizes all producers with slight variations, but then they are cider mavericks like Demetrio. Creation of varietals, coupages different deposits or the idea of check how the wood suits the cider they are only a small part of your concerns.

“If we have acidity, we have tannins [que se los da la piel] and we have sugar, just like in wine, why can’t we treat it the same way, “he explains. The proof is that he gets it through aging in bottle, in barrel, making with the best apples and differentiating them, and even making a Champagne-style sparkling cider that has more cider than wine.

“If we have acidity, we have tannins and we have sugar, why shouldn’t we be able to treat cider the same as a wine”

“We have always made cider, but it was in 2006 when we already did something different, which was the year we launched Saarte“, he clarifies. In this case, a cider that respects the quality of the raw material, prevents the apple from overripening and It is picked by hand from the highly selected apple tree.

This gives it a slow fermentation in the tanks to lower temperature and then undergoes a short aging in bottle. Even more exclusive and a rarity in the cider sector -not only Basque, but worldwide- it is Jentilen Lurra, a cider that in a blind tasting you would not know how to identify as such.

“It is a monovarietal of an apple called Narbarteko Gorria that is very aromatic and has very good acidity,” he explains. After fermenting it in steel tanks and after its two fermentations, it leaves it rest for three months in French oak barrels. “It is more intense, has more body and is complex,” he adds about one of his ‘pretty girls’.

In addition to the ‘oddities’, it also brews Natural ciders following the standards of the DO Euskal Sagardoa and, still without reaching the market and as a first, a cider that still has no name. “I don’t know what to call it, but it won’t be for sale because all the production has already been bought by a chef for his restaurant“, Explain.

We try to get the name out of him, but there is no way. Cider’s secret guard, but he does assure us that they are several Michelin stars that he has in his jacket. A clue that in a Euskadi full of ‘starry’ restaurants is not of much use but that serves as an excuse to continue investigating.

How to control Earth Spirit in Dota 2

This is the cover of SPORT

‘Justice League was the worst experience of my career. ”Ben Affleck recalls how horrible making the DC movie was and how it changed his...