Bullfrag
Home Entertainment from the catastrophic and flamboyant adaptation of 1984 to the aesthetic bombast... 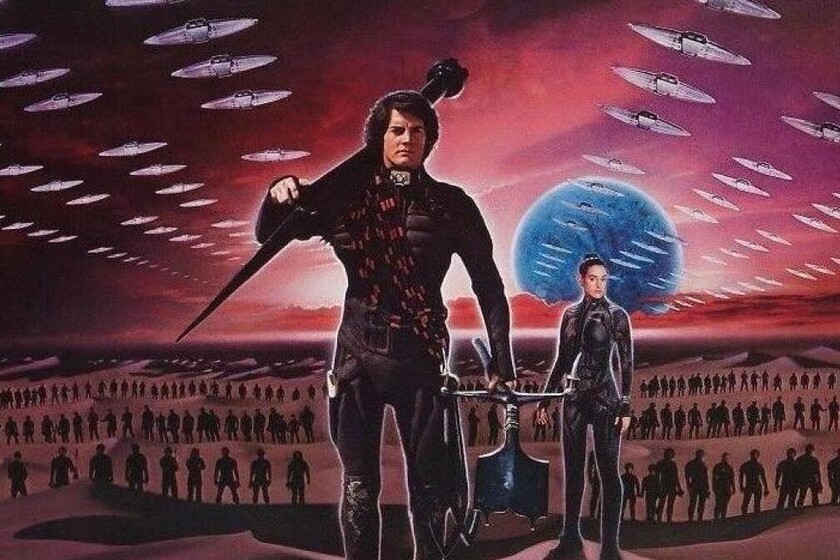 Now that, after dances of endless dates, Denis Villeneuve’s ‘Dune’ has finally been released, it is time to take a trip to the past not as pleasant and satisfying as one might expect. Specifically, It’s time to go back 37 years to immerse ourselves in the adaptation of Frank Herbert’s classic Directed by David Lynch and released in 1984 after passing through the … peculiar filter of the Laurentiis.

Although what I will explain below about the film, surely, translates into the occasional stone due to the enormous cult that surrounds it – I am opening the anti-missile shield -, I must point out that I am fully aware of the chaos, problems and conflicts that they surrounded the production and the reluctance of its head in charge of a material that gave them no interest; but I will limit myself to evaluating the final product that was released in theaters.

That said, I invite you to join me in this reflection on ‘Dune’ —in which I will also confront it with the new version—; a feature film that, from my point of view, is The living example of how far romanticizing a major cinematic disaster can go. There is no doubt that it can be fondly remembered and reviewed with a knowing smile on the lips, but this is as true as there is no where to take it.

Index hide
1 Double-headed fight
2 “Where are my feelings, I feel for none”

Compare the shape of two space operas Shot almost four decades apart, in which technology has evolved to the point of changing the way we make movies, it is simply absurd. But there is something that connects the ‘Dunes’ of Lynch and Villeneuve, and that is a tremendous ambition when it comes to scale who shares his taste for wide-angle shots to capture immense settings and desert landscapes.

During its first passages, 84 ‘Dune’ fascinates through simply mind-blowing production design. The huge rooms captured with a plan value that, little by little, has been lost to this day, the collection of practical effects crowned by Carlo Rambaldi’s creatures, the costume designs and ships … Everything shines on one level more than remarkable that it seems to do justice to a budget estimated between 40 and 45 million dollars.

But, in a matter of sequences, this whole illusion falls apart. The Baron Harkonnen presentation scene rises as a great turning point, transforming what appeared to be a production with a degree of sobriety and taste – within its inherent eccentricity – into a circus halfway between Troma and Cannon. A quirky revelry much closer to the pulp joke of ‘Flash Gordon’ —Dino de Laurentiis’s stamp is obvious—, that of exercises sci-fi contemporaries more aligned with the original material.

From that moment on, the formal and audiovisual neatness of ‘Dune’ begins to give incomprehensible lurch. The more polished visual effects are interspersed with others of balance – it is surprising that titles like ‘Blade Runner’, ‘The Empire Strikes Back’ or ‘Terminator’ are contemporary and had less budget -, the characterizations of characters get even more out of control – Sting’s in loincloths it is worth studying—, the interpretations enter the tricky realms of histrionics … even Toto’s guitar playing seems out of place.

Watching the Lynch film gives the feeling of witnessing a battle between two different productions fighting for more minutes of footage, which collides head-on with what was seen in Villeneuve’s ‘Dune’; a work that shows great consistency from start to finish and makes it clear that it is the work of an author with a clear vision and sufficient creative control.

“Where are my feelings, I feel for none”

Above the form – which always is, and should be secondary – the great gulf that separates both adaptations of ‘Dune’ for the big screen lies in his narrative and in the way of structuring the epic of Paul Atreides and his messianic journey. Lynch’s version condenses the entire dramatic arc into little more than a couple of hours, while Villeneuve chooses to fragment the story into two parts, the first of which lasts two hours on average —which the 1984 film covers in its first About 75 or 80 minutes.

While the French-Canadian filmmaker can afford to simmer his tale, injecting it with an almost hypnotic rhythm, calmly introducing his characters and the universe around them, and spending time planting seeds whose fruits will be harvested later, Anthony Gibbs montage for David Lynch is forced to step on the gas from the first moment to be able to reach the goal on time.

The ‘Dune’ Lynch is cut with a machete, with a sense of dramatic progression run over and a lack – not absence – of cohesion that links sequences without rhyme or reason while the action and the characters pass in front of the viewer’s eyes, generating more confusion than emotion. But, in order to add some glue to this syndication and make Herbert’s dense story more understandable, the film chooses to make the worst possible use of a dangerous resource: voice over.

In addition to some grueling conversations, it is the off who turns ‘Dune’ into the party of the most tedious oral presentation and, at the same time, essential to be able to condense a plot and a lore that is too broad. In this case, it becomes a multifunctional tool that provides background and necessary information; but it also expresses the characters’ emotions and thoughts – horrible -, summarizing in a few seconds what should have been scenes properly developed on the screen.

But the effects of the voiceover are minimal when compared to the worst side effect of the narrative speed of David Lynch’s ‘Dune’: the treatment of characters. In a long passage, Paul wonders – in off, of course – where are his feelings, clarifying that he does not feel anything for anyone. Well, this unknown could well be projected onto the least complicit viewer, who may neither feel nor suffer from the collection of faces that populate Arrakis.

Deaths, betrayals and tragedies lose all effectiveness because there is no time to raise, develop or establish empathy with the protagonists Villeneuve isolates us from them through the icy camera approach. Relationships between them evolve by court, rivalries by ellipsis, and good old Paul sees his conversion into Muad’Dib completed in less than it takes to say “Bene Gesserit.”

Time, that which, they say, always puts everything in the place it deserves, has ended up putting David Lynch’s ‘Dune’ on the shelf of cult classics, being venerated by many and looked with condescension by those who point to the Laurentiis as guilty of a capital misfortune. I will not be the one to say otherwise or pontificate on how a feature film should be classified, but sometimes there is no greater distortion of reality than nostalgia.

Verstappen sanctioned for Sochi for his accident with Hamilton at Monza