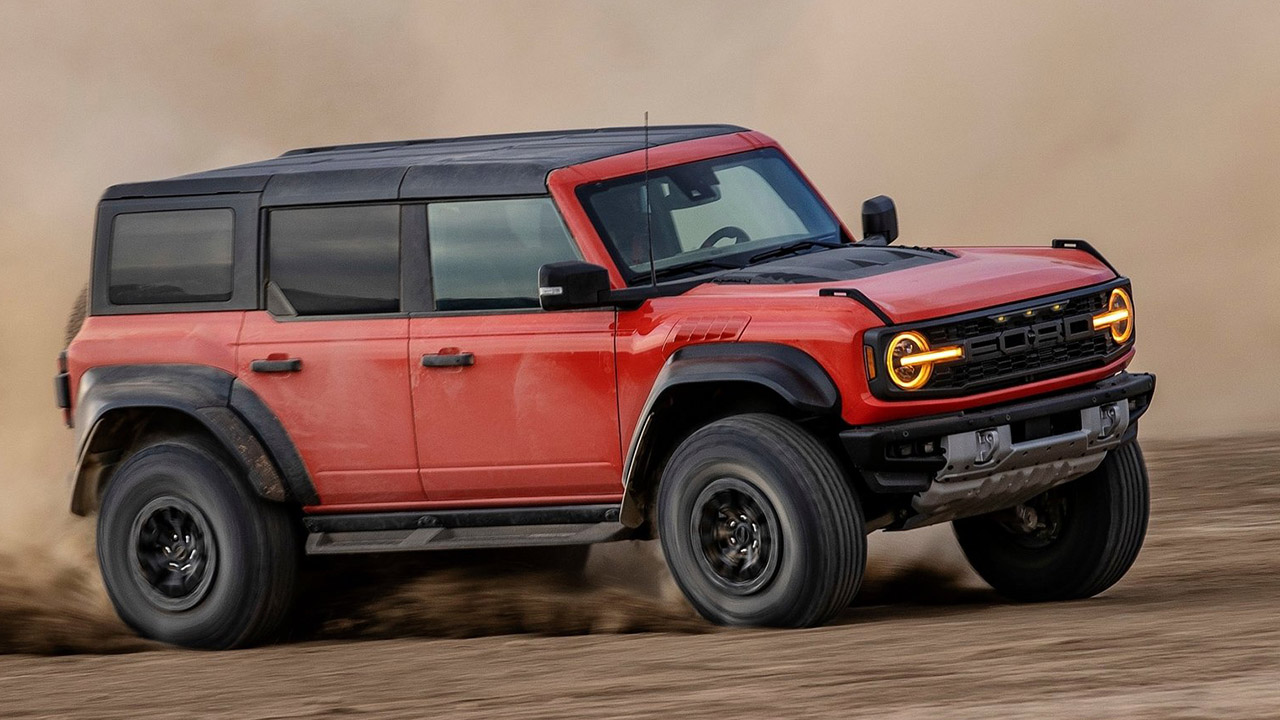 The new Ford Bronco Raptor has been presented in society. Ford Performance brings to life the most radical and extreme street version of the Bronco ever created. An off-roader that boasts a mechanical section, technological equipment and a set-up of the chassis to face all kinds of challenges far from the asphalt of the big city.

The wait is over. The New Ford Bronco Raptor has been presented in society. The long-awaited sporty variant of the off-roader from Ford, and offering a higher level of exclusivity, has debuted. A vehicle signed by Ford Performance that stands out for its aggressive appearance and its extraordinary performance away from the asphalt of the big city. This is the most powerful road-legal Ford Bronco in history.

A project that, since it was launched, generated a lot of interest. And it is that Ford Performance set a clear goal from the start. Create an agile and fast vehicle that maintains all its off-road capabilities. The result is the new Bronco Raptor.

The exterior design of the new Ford Bronco Raptor

The images that illustrate this article allow us to quickly discover what the distinguishing features of the new Bronco Raptor. Features that clearly differentiate it from a conventional Bronco. On the front we have a huge block with the letters that make up the name of the brand. They are flanked by specific optical groups and with LED technology.

The bumper has an exclusive finish and integrates towing hooks. In addition, the fog lights, which also use the led technologyThey are perfectly integrated. Ford notes that the hood is made from a sheet molding compound and features a radical vent. The bodywork has also been appropriately modified with new panels to bring out the more aggressive side of the Bronco. The wheel arches and the roof and rear panels are a good example.

Under the premise of offering a plus of personalization Ford will allow you to choose a vinyl package with which to decorate the bodywork. A body that can be painted in any of these colors: Hot Pepper Red Metallic, Velocity Blue Metallic, Eruption Green Metallic, Shadow Black, Iconic Silver Metallic, Area 51, Cactus Gray, Cyber ​​Orange Metallic Tri-Coat, Oxford White and Code Orange . This last color is specific to Ford Performance. And we should not overlook the 17-inch wheels designed by Ford Performance and wrapped in 37-inch BFGoodrich KO2 tires respectively.

The interior and technology of the new Ford Bronco Raptor

Leaving the exterior aside, if we venture inside the new Bronco Raptor we will quickly find ourselves enveloped by a digital and connected environment. Equipment is one of the determining factors. The instrument panel is fully digital and has a size of 12 inches that allows you to enjoy a high level of customization. The “nerve center” of the passenger compartment is a 12-inch touch screen. A key component to managing the SYNC 4 infotainment system.

Read:  The Audi Q8 Facelift will demote its position, the name Q7 Sportback rings out strongly

Base trims of the new Bronco Raptor will be equipped with Black Onydx marine-grade vinyl-wrapped seats while the interior floor is coated with water-resistant rubber. Scattered around the cabin there are details typical of this model signed by Ford Performance. The orange color Code Orange is a clear example of this.

It is also possible to opt for new laser-perforated Black Onyx Neo suede seats and vinyl for the upper part of the instrumentation. In the same way, it is worth noting the thicker steering wheel with a sporty contour with gear shift paddles made of magnesium. Among other equipment we have a B&O sound system, adaptive cruise control and a 360º vision camera.

The new Ford Bronco Raptor is already a reality. It will arrive in dealerships in the summer of 2022

The tuning and engine of the new Ford Bronco Raptor

Regarding the mechanical section, under the hood of the new Bronco Raptor is a 3.0-litre twin-turbocharged EcoBoost petrol engine that develops a power that exceeds the 406 hp (400 hp). This makes him the most powerful street Bronco in history. The engine, as you might expect, is tweaked specifically to meet the standards expected of a Raptor-labeled model.

Both the intermediate cooling system and the air injection system have been specifically designed to withstand the highest ambient temperatures in the desert. The engine is associated with a automatic gearbox Ten-speed SelectShift and a 4×4 drive. The traction system can be adapted through a driving mode selector.

On the other hand, and how could it be otherwise, the Ford Performance team has worked especially on fine-tuning the vehicle to improve its performance in terms of agility and versatility. The suspension has more travel and is accompanied by new shock towers. The company has collaborated with FOX on the suspension upgrade.

The American brand has also installed new axles that allow the track width to be increased. Other improvements made have to do with the transfer case or the larger capacity clutch. In addition, some new reinforcements allow to improve the rigidity of the bodywork.

When will it hit the market? Ford has confirmed that the order book for the new Bronco Raptor will open next March. The first units will be available at dealerships in the summer.