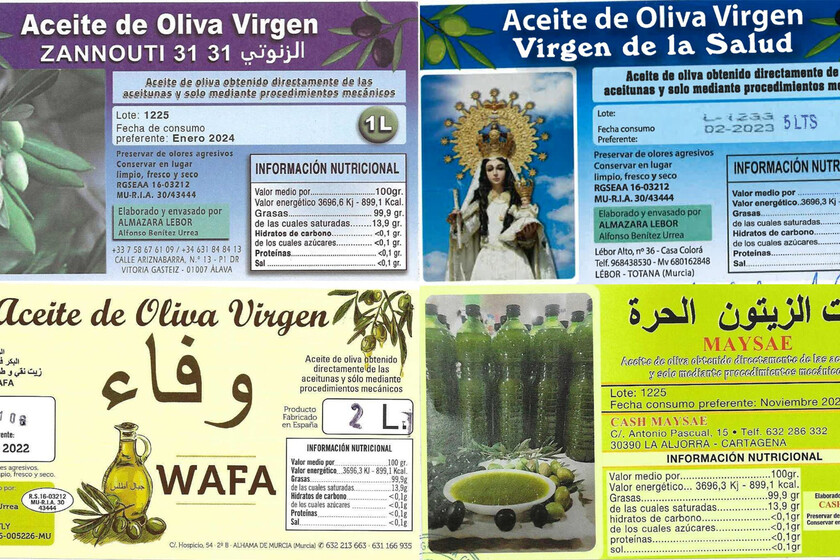 The Autonomous Community of Murcia has notified the Spanish Agency for Food Safety and Nutrition (AESAN) of a detected case of processing, packaging and distribution clandestine commercialization of different olive oils, under the labels “virgin olive oil” and “extra virgin olive oil”. products are considered not safe for consumption due to the lack of relevant reliable traceability.

At the moment there are no reported cases of intoxication or problems derived from its consumption, but it is recommended that anyone who may have any of the oils included in this alert at home does not consume it and proceed to its return to the point of sale for withdrawal.

According to the AESAN, this case derives from a major anti-fraud operation of the sale of olive oil, one of the products most affected by the problem of food fraud in Spain, in the European Union and throughout the world, especially through false labeling or adulteration in the composition.

During this operation, when different official samples were analyzed, results were obtained that indicated that the analyzed oil was not an olive oil, since the presence of a vegetable oil from seeds or mixture of vegetable oils from different seeds. Thus, it was also detected possible health risk for the commercialization of oil that is not safe because it comes from clandestine operators, which entails the absence of reliable traceability that offers guarantees.

This lack of traceability leads the authorities to consider that they would be involved all batches and packaging formats of the products marketed under the names and/or brands mentioned in the notification, since the production reports of the batches produced are not available.

These are the names that identify to all products involved:

At the moment it is known that the initial distribution of these products has occurred mainly in the Region of Murcia, also with a presence in Catalonia, the Basque Country and the Valencian Community, and the possibility of distribution to other Autonomous Communities is not ruled out.

In DAP | Food alert due to the presence of Listeria in the head of pigs of the Vicente López brand
In DAP | Fraud in the sale of saffron: they dismantle a criminal group that used modified gardenia instead of the spice

Tricks to make a creamy, fine and emulsified gazpacho or salmorejo without Thermomix

Food alert in Mercadona, Lidl and Aldi ice creams due to the presence of foreign bodies

7 habits that will help you form a financial education

Surprise at the Nurburgring! – The Porsche Cayenne Coupé GTS Facelift reveals a special detail in these spy photos