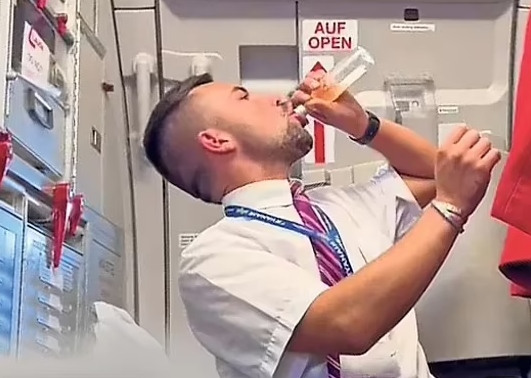 The Ryanair flight attendant who was fired for drinking Jack Daniels whiskey from the aircraft’s beverage cart and a small bottle of wine while on duty I could go to jail.

This is Sam Thompson, 26, an Englishman who worked for the low cost company who is awaiting sentencing in freedom, but who could be taken to jail, according to publications Daily Mail.

Thompson was on duty when a witness saw him drink Jack Daniels from the trolley and then take a small bottle of wine out of his pocket and “drink it whole”, according to statements at Chelmsford Magistrates Court, UK. The video with the images circulated on social networks.

This Monday, July 4, the defendant, who has already been fired by Ryanair, admitted to drinking alcohol and working at the same time, when the regulations for cabin crew members prevent it.

The prosecutor, Nishma Khan, said in court that witnesses saw Thompson sit down and “take a small bottle of wine out of his pocket and drink it whole.”

He also took a shot of Jack Daniels whiskey from a drinks cart and made an obscene gesture at the camera, Khan said.

British newspaper The Sun: Cabin crew Sam Thompson, 26, was caught drinking wine and Jack Daniels from a drinks cart in front of a passenger on board a Ryanair flight. He was arrested upon landing after the captain was alerted. pic.twitter.com/dY3lKPCCYK

The court will pronounce sentence on August 3 and, according to some sources, could be jailed.

This is going to happen if they give him the maximum of the crime of infraction of the Law of Transportation and Railroad Safety, two years.

The incident occurred on a flight from Rzeszow, Poland, to Stansted airport.

According to the Daily Mail, Thompson was given a breath test by police at Stansted Airport in Essex, UK, and the reading gave 50 mcg of alcohol in 100 ml of breath, when the legal limit is 9 mcg in this class of work. The legal limit for driving is 35 mcg of alcohol per 100 ml.

beyond the law, all Ryanair crew are prohibited from drinking alcohol up to eight hours before or during the flight.

The company’s code of ethics says that being “incapacitated by drugs or alcohol while conducting company business” is subject to disciplinary action.

The flight belonged to Ryanair, but was being operated by the low cost’s sister company, Lauda Europe.

Flight attendant shows the “dark side” of his profession

How much does the flight attendant cost? Tiktoker reveals it

Japan’s Prime Minister changes his cabinet due to falling popularity