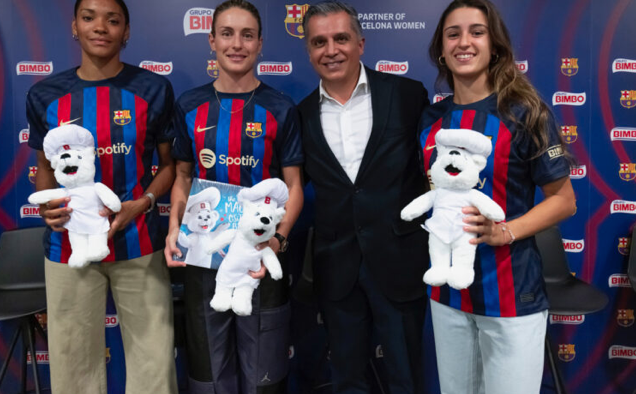 The sports industry is one of the most important in the world, and all this, because it moves millions of dollars for various stakeholders. Recently, it was revealed that Grupo Bimbo, the world’s largest bakery, and FC Barcelona, ​​have signed an agreement with which the global brand becomes a Global Partner of the Club and a Main Partner of the Barça women’s first team.

Given these data, the importance of what is sports sponsorship that many define as that contribution or support carried out by a company in order to unite its brand with the values ​​and image that sport transmits.

This type of sponsorship can cover athletes, clubs and sporting events. Currently, investment in sports sponsorship has been increasing, which has substantially improved the visibility of sponsoring brands and, therefore, the return on their investment in economic terms.

According to the information, this alliance has as its strategic axis the commitment to female talent and equity, the promotion of nutrition and healthy lifestyles and the promotion of young talent.

Likewise, This alliance was designed to generate social impact and it is the first time that the company of Mexican origin sponsors a women’s soccer team.

Through this alliance, both organizations will work with the objective of having a positive impact on society, through the promotion of habits that contribute to a greater well-being of people and also to build a more sustainable environment.

Read:  Bitget plans to increase the global workforce by 50% to 1,200 employees

As well as, it will allow Grupo Bimbo to carry the message of equality globally, thanks to the recognition and influence that FC Barcelona has in the world, leveraged by the talent and example of its women’s team.

It was revealed that the official presentation of the agreement took place at an event attended by Juli Guiu, Vice President of the Marketing Area of ​​FC Barcelona, ​​while Grupo Bimbo has Alberto Levy, VP Global Marketing, and Rosa Alabau, head of Bimbo Global Marketing participated.

One of the alliance’s proposals is for the Bimbo brand logo to appear on the left sleeve of all the FC Barcelona women’s first team shirts. In addition, the team’s nutritionists will integrate sandwiches into their workouts as part of the athletes’ diet, highlighting the nutritional values ​​of bread through simple, innovative and nutritious recipes.

In the same context, within the framework of the agreement, in addition to being a global partner of the Club and Main Partner of the women’s soccer team, Grupo Bimbo will also collaborate with the objective of promoting new talent with La Masía, the FC Barcelona training center .

It is not the first time that a brand has joined the sponsorship of a sporting team or event, as an example Apple Music will sponsor the new Super Bowl 2023 halftime show.

Or also, in the month of March, FC Barcelona announced that UNHCR-UNHCR is its new sponsor and its logo is located on the back of the shirt of the men’s and women’s first teams and that of the Barça Genuine Foundation team.

In conclusion, sponsorship terms are very important in any event, especially in sports, since many things can be covered with this essential figure.