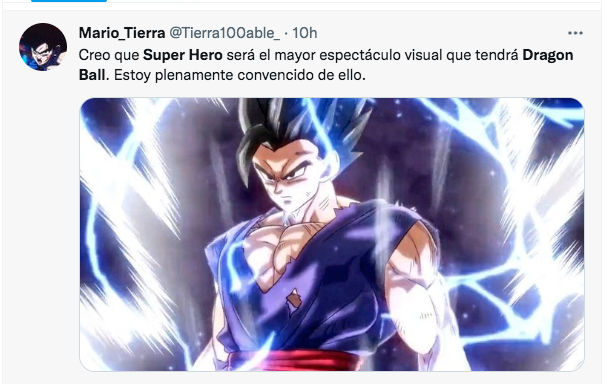 One of the sagas that has marked the childhood of millions of people around the world, was undoubtedly the mythical Dragon Ball series, which won the hearts of millions with its history, characters and soundtrack, which have led it to being one of the most beloved cartoons today and who after a delay, will premiere his new movie “Dragon Ball Super Super Hero”which has generated various expectations among fans.

Just a couple of weeks from his Japan Premiere, Toei Animation decided to offer a small wink of what his new film will be, revealing a small trailer in which it is speculated that a fragment of what could be the final encounter of the film appears, although the advance is a few seconds long, in it Gohan, Piccolo, Goten and Trunks can be seen joining forces to defeat a mysterious villain, where a capsule is also shown, which has caused fans to increase the rumor that Cell would be the main villain to defeat in this tape.

Within what little is known about the new film, our heroes are expected to face the Red Ribbon army, which was defeated during Goku’s childhood, which led to the creation of androids by Dr. Gero who also brings to life his deadliest bio-android weapon Cell; however, former members of the Red Ribbon have created the ultimate androids known as Gamma 1 and Gamma 2, who call themselves “superheroes”.

One of the main celebrations on the part of the fans is that Goten and Trunks are given prominence during the fight against the androids, who they point out had lost relevance in history, in addition to the fact that there is finally favorable news about its premiere in Japan, since it is estimated that this will be on June 11, so it is speculated that it will be in summer to reach other countries including Mexico.

PRINTS:
– The aesthetic looks much better, I really like how it plays with colors.
– Great detail shading, and character lighting, looks pretty polished. pic.twitter.com/l7MHurO3yF

I think that Super Hero will be the biggest visual spectacle that Dragon Ball will have. I am fully convinced of this. pic.twitter.com/bnXaZT8fpB

According to leaks from the French cinema Grand Rex, it shows that the movie Dragon Ball Super: Super Hero will be 120 minutes (2 hours) long, everything indicates that it would be the longest movie in the franchise. pic.twitter.com/XN4cRnsOJi

New trailer for ‘Dragon Ball Super: Super Hero’ with new scenes!
We can see more of the leading role that Son Gohan will have in this film that will be released in Japan on June 11 and that will arrive in the rest of the world in summer#DragonBallSuperSuperHero https://t.co/q9iAR1XSHX

This is what the house of a person with depression looks like; impact support campaign
Internet users defend Walmart and Oxxo after consumer criticism for not delivering bags
Taqueria in South Korea takes advantage of the language barrier to insult (and charm) diners
Isla CDMX and Sabritas delight with a musical starring sandwiches

Read:  This is the new live action trailer for Call of Duty: Modern Warfare 2