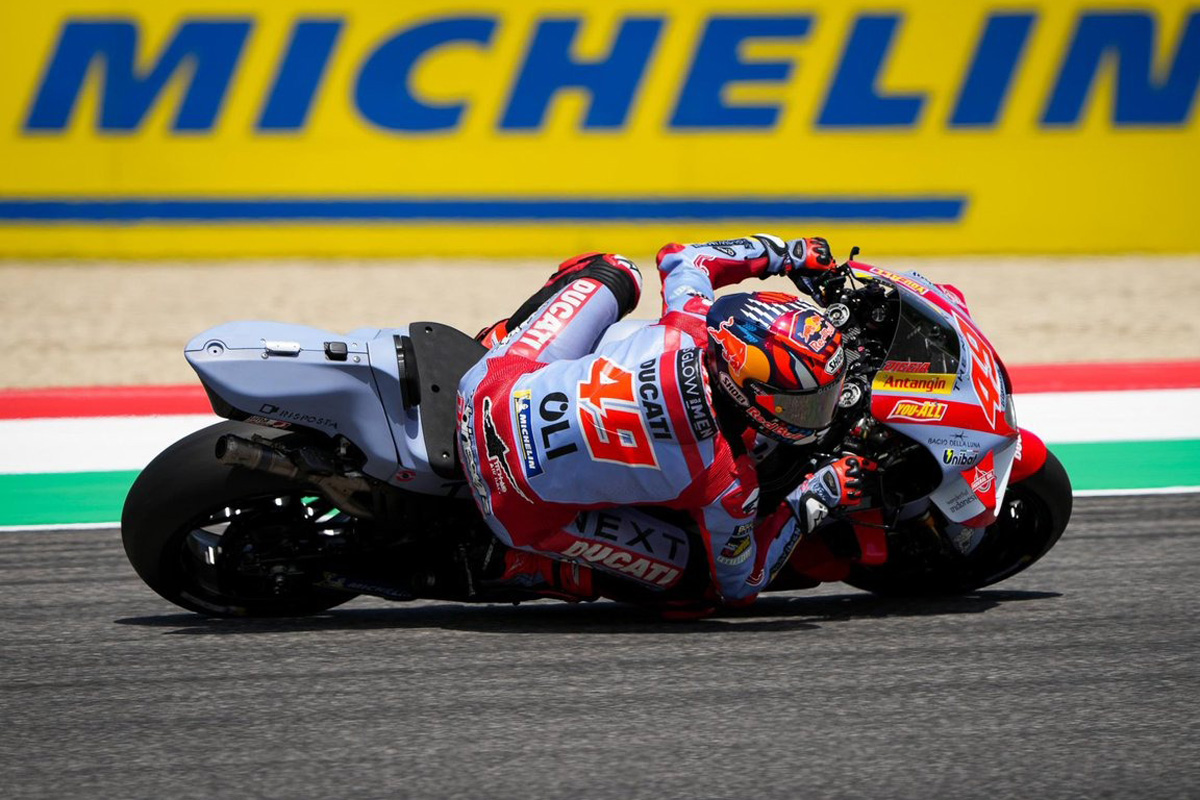 Fabio Di Giannantonio adapts better than anyone to changing conditions and takes pole with a time of 1:46.156. Bad day for Marc Márquez who suffered a crash at the beginning of Q1 and will start eleventh tomorrow.

Fabio Di Giannantonio has achieved his first pole of the season in the Moto3 Italian Grand Prix by rolling on the Mugello circuit in 1:46.156. No one has been able to beat the Italian from Gresini Racing since Q1. Ducati has cornered a ‘top 5’in which Marco Bezzecchi, Luca Marini, Johan Zarco and Pecco Bagnaia have been. Marc Márquez suffered a crash in the early stages of Q2 and thanks to a penalty from Jorge Martín he will start eleventh.

After a few free accidents for Ducati riders, the rain was beginning to fall on Mugello during FP4. That scenario gave way to an interesting Q1. The pilots mounted rain tires, but the water accumulated on the track was not abundant, which made the runners suffer. Brad Binder was the first to ride slicks and he nailed it by turning three seconds faster than the rest. However, the final fight it would be between Jack Miller, Marc Márquez and Fabio Di Giannantonio. After several laps exchanging positions, it was finally the Italian and the Spanish who made the cut to Q2.

The fight for pole began with the fall of an impetuous Marc Márquez which forced the session to stop. After Q2 resumed, conditions allowed the drivers to run on dry tyres. Fabius Di Giannantonio was then at the head of the classification and lowered his own time with each lap. The Roman driver seemed to feel comfortable under track conditions that he already knew after passing through Q1. Although several riders have tried to dispute the position, finally the one from Gresini Racing It has been done with the pole with a time of 1:46.156.

Read:  The wall light that is the Xbox logo and is essential for gamers for only 22 euros

Ducati not only has to celebrate the pole of the Italian ‘rookie’. their bikes They have taken the top five positions on the grid. Marco Bezzecchi and Luca Marini will complete a completely Italian front row. Johan Zarco and Pecco Bagnaia complete the ‘top 5’ special. The world champion Fabio Quartararo had to settle for sixth position, just ahead of the recently renewed by Aprilia Aleix Espargaró. Takaaki Nakagami has been the best Honda of the day by achieving eighth place. He will be accompanied by the factory team driver Pol Espargaró, closing the third row of the grid.

Enea Bastianini completes the group of the top ten, in which the Spaniards Jorge Martín and Marc Márquez have not been able to sneak in. The one from Cervera, however, will come out ahead of the one from Madrid. The Pramarc Racing driver has been penalized three places on the starting grid for hindering another driver during FP3. With qualifying over, all eyes are on Honda. The Japanese brand is expected to make an announcement in the next few hours which could be related to the health of Catalan.