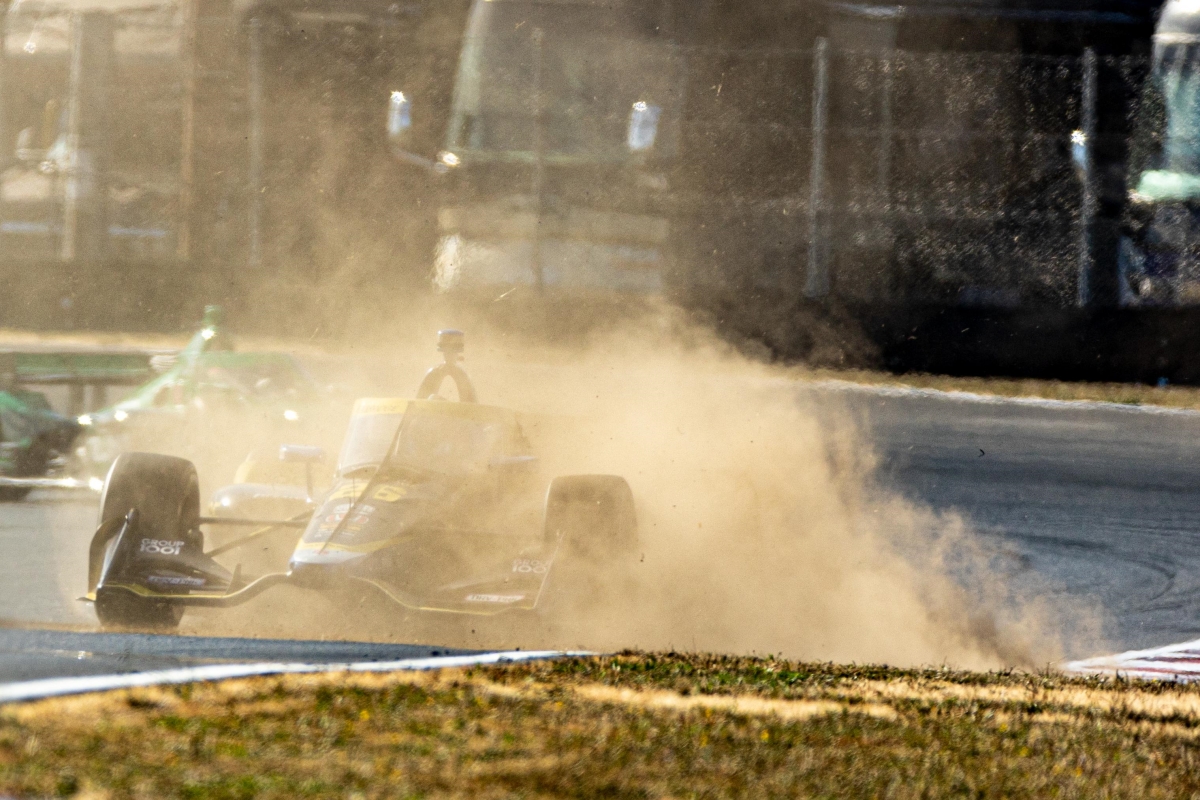 IndyCar vs. Formula 2 seems to be the fashionable diatribe, and to differentiate them in the biggest, you have to start with the smallest: their hardware. One goes in millimeters and the other in inches… The same thing happens with everything that surrounds and defines them: they are different.

Since the FIA ​​did not grant, through regulation, the Superlicense to Colton Herta to be able to participate in Formula 1, many cried out in heaven. Drivers, team managers, and the chorus of respectable followers of the category who sing a «whateeeeee passssa? Is ‘my’ competition worse or what?. No, it is not worse, it is different, and we are going to analyze the differences.

Index hide
1 The category
2 The pilots
2.1 F1 is not willing to weaken its monopoly: the signing of Colton Herta is complicated
3 The political mechanism
3.1 Epilogue:

IndyCar enjoys a huge global reputation, there is no doubt about that. Both its pilots, as well as the teams and the event itself, are highly respected and are a clear reference. Moreover, its annual icing on the cakes is revered with special admiration. 500 Miles; an example that should imitate Formula 1 with an annual event, unique and of special relevance, that differentiates it from the rest, especially with such a bulky calendar that equals all destinations.

IndyCar, as a whole, is a pinnacle of competition, surrounded by an aura forged over decades of doing things right, and has become the final destination of many sports races due to its unique personality. This is just the opposite of what Formula 2 is known for.a category that usually serves as support for the main course of the weekend, Formula 1. It is not a destination, but a stepping stone, you go through it but with the desire in mind to live in another, more shiny apartment with more rooms.

IndyCar is not America’s Formula 1, but rather a secondary category

Without its older sister, Formula 2 does not have, not even remotely, the sporting, media and business depth that its American counterpart has. On the other hand, the category Yankee it is constrained geographically to the four cardinal points of its country of origin. Only occasionally does it leave its territory, while Formula 2 runs in a dozen long national destinations and several continents. Not only that, but sister categories have emerged from it, to compete with cars from previous generations. If the American spirit is more local, that of the European competition harbors a more global spirit, and this is noticeable in many elements… such as the pilots.

And an extra addition. Without detracting from the quality of this type of event, IndyCar is not America’s Formula 1, but rather a secondary category. The equivalent Yankee to F1 is another. At the turn of the century, the Kodak company had a very detailed study that provided a rather picturesque conclusion. According to the photography giant, the event on a planetary level in which more photos were taken in less time was not at the Olympics, the World Cup, or a Disney park. It was in Nascar. That is the F1 of the Americans; the other not so much.

This 2020, those in charge of the Formula 2 protocol have carried nineteen flags to attend to as many possible inhabitants of the podium. Nineteen hymns have been able to sound in their tests to serve twenty-nine different participants who have run at least one race. Thirty-nine different drivers have participated in the Indy, of which a fortnight, 40%, have been native. Five of them have been Formula 1 drivers, none American. If F1 is a British category, its nationality is not clear from F2. But this year there have been two subjects of the brand new Carlos III who have defended the Union Jack, it does not reach 7%.

The basic difference between both types of driver is that in IndyCar they refer to the category to live in it, with contestants who have competed for five years in a row. In F2, on the contrary, the pilot who is more than three years begins to be looked at badly. If you arrive and win races the first year, it means you have ballots to go head first to F1. If this happens during the second year, it can also happen that the doors of the last step open easily. But if you’re not dominating, contending for the title, or at least winning races in your third season, either you’ve chosen a team that’s terribly wrong, or you’re just not worth it.

There are exceptions, episodes of bad luck, obvious cases of wasted talent, but those who do this do not usually fall upwards, but to another less shiny side. And are one or the other better or worse? There is everything, however in essence they are different, because their environments, their circumstances and their purposes are different. In IndyCar they tend to be, very often, olderthey have more experience, but they do not jump from it to higher categories.

In F2, a 25-year-old guy is already beginning to smell moldy, while Juan Pablo Montoya runs—and how he runs—in Indy with almost 50 studs (47 to be exact). Precisely the Colombian has a crown prince, Sebastian. Where does the miniMontoya run? In Formula 3. His father, who left F1 with intemperate boxes, knows that the premium path is that, not the other. It can be concluded that Indy drivers are better drivers than F2 drivers… to race in Indy. As a general rule, they are more educated, more tall, with experience in ovals, but they hardly roll in water, they do it on more homogeneous asphalt. They could exchange their roles, and the two would have to go through an adaptation period, which in the case of the jump from F2 to F1 would be less.

Read:  Agustín Carstens warns of a new inflationary era in the world

F1 is not willing to weaken its monopoly: the signing of Colton Herta is complicated

The tires are already known, the tracks are the same, there is usually an interconnection between riders of the two categories, and there is a lot of communication between them, a lot of contact. In the latter there are not only technical elements but also political ones. The assumption of codes and behaviors is a more complex subject than it might seem. The least is that an Indy team is at most two dozen people and in F1 a normal team has seven hundred employees. This is the anecdote. The problem is that those from the other side of the pond tend to misunderstand the structures of power, uses and customs, and the general order of the old continent. Jacques Villeneuve charged against this situation when leavingsame as Montoya, and the perfect example of maladjustment was Scott Speed.

In the self-styled ‘land of the free’ the space for ego and personality is much larger, while in Europe there is a very solid structure, some XXL sponsors who have their guidelines, an FIA that tends to forgive little, and interrelationships that work differently. When you have spent years in it, you assume them, learn them and understand them; when you arrive from another culture it is common for there to be clashes, which leads to a general malaise. Sebastian Bourdais is the opposite example, but you have to understand that part of his career was done on European soil and this was not entirely new to him.

There are three ways of understanding speed on a global level: the European, the American, and the Japanese. Yes, they also run in Latin America, in Australia, in China or in Arab countries. There are more than 6,000 race circuits spread all over the planet, but the pinnacle of all this is undoubtedly Formula 1. The zenith of the competition is of European origin, and although of pleniplanetary power, the DNA of the FIA ​​comes from the same seed. FIA sculpted its rules, fostered its growth, regulates its actions and opens or closes the door, which is what the handle holds for that. The Japanese are far, far away, and FIA sticks its nose out there, rather little or nothing, but the Orientals accept what they are told, and then Tsunodas, Satos, or Kobayashis arrive without a problem

The Americans are just as far from the Place de la Concorde, however, they are more wild, more independent and do not pay much attention to the dictates of Ben Sulayem and his predecessors. A simple but highly visible piece of evidence is that they were encouraged to put on Halo and they mounted the Aeroscreen. There they do not have a Superlicence, nor do they care. When the undisputed Fernando Alonso appeared there, multiple F1 World Champion or with several Lemanses in his pocket, had to go through his driving school and prior exam to receive permission to compete like any other rookie. His circus, his rules. For this reason, when they leave their domains, they have to accept the rules of the house where they go to devour their menu, and it is something that they do not take well.

FIA brought the present guidelines for access to the Superlicence to ‘clean’ the piloting market of inappropriate categories. There were twice as many competitions as today, but they were dissipating the energy by spreading the efforts. The move was to kill many, which is not nice, however it is also true that they competed and overlapped in a shrinking space. Some fell like the excellent World Series, or condemned the German, Spanish or Italian Formula 3. From now on, the candidate for Michael Schumacher should pull in the lane set by the FIA, and this is how things are going if you want to get to F1. And works. There are more roads, but they will be slower, more expensive, and less paved.

FIA should not prevent talent from reaching the top, but to help the one with possibilities. But as long as this is the one there is, there is no other option but to assume it. Do you want to enter his party? Well, comply with their protocol rules and dress as they have asked you, because those who arrived had to go through there. FIA is not about to twist that catechism, without exceptions, and it is good that it is so. The rules are there to be followed, but Colton Herta, a race winner in IndyCar and a driver of little questionable level, deserves his chance in F1. Another thing is that he has earned it, because that Superlicense has been accessed by other drivers in his category who obtained better results.

Perhaps it is time to turn the subject around without losing sight of the path taken by Montoya’s son, Jack Doohan, Alesi’s son, Ralph Schumacher’s son, Felipe Drugovich, all the Fittipaldi who run, De Vries, or where Piastri, Hamilton, Rosberg, Leclerc, Checo, Russell came out. As of today, and as long as this does not change, it is the best path to F1. Do you want to arrive? pull over there.

If in Formula 2 millimeters are used and the inches of the Indy seem big to you, there is a solution. The “thou”, or thousandth of inches, ‘a thousand of an inch’. This measurement is equivalent to 0.0254mm. Well, with a thousand-thousand-thick cigarette paper, some are caught to find the cat’s three feet. They are different, friends, there is not much more.

Night without peace – Trailer, premiere and what you should know about the action Christmas movie

To the Bone – Premiere, trailer and everything about the film with Timothée Chalamet

This is how the exchange rate dawned this Thursday