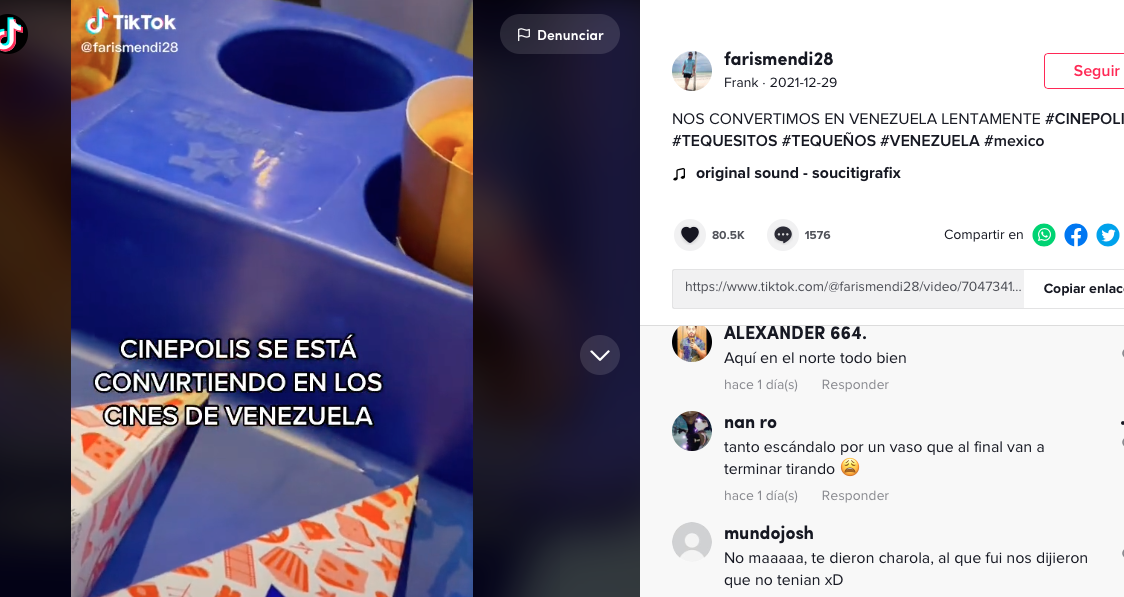 Social networks are the preferred means of communication for many people in the world. It is normal to see on these platforms that Internet users express their complaints against the brands they consume, such as a complaint against the cinema company Cinépolis.

A user on the social network TikTok, shared a video where he sarcastically complains about the Styrofoam cups that are being delivered to a Cinépolis branch in Mexico.

“We slowly become Venezuela Cinépolis,” says the publication of the subject on the digital platform that accompanied with a video where a glass of Styrofoam is seen without any type of advertising.

The netizen’s comment caused controversy on the social network, Well, when comparing the cinema with Venezuela, many of the users did not understand the sarcastic comparison of it.

“Have you already been to the cinema in Venezuela? Tell me what it is like? ”Says one of the comments.

Likewise, there are several comments where people defended the cinema and assured that this glass is because they were left without supplies by the crowds of people who flocked to theaters to see the new Spider-Man movie.

“Usually that happens after a big premiere, it happened after the premiere of the avengers and now Spiderman,” reads another comment.

“As far as I understand that can happen only in newly built cinemas because they have not supplied all the complete articles,” says another follower of the TikTok account.

But there were also the ones who didn’t care He changed the glasses since they claimed that they were going to end up in the trash anyway. “So much scandal for a glass that in the end they will end up throwing away,” says a comment.

This type of content on social networks always generates that the digital pulse creates an opinion, as they are topics that sensitize many people who defend the brands they consume to any negative comments that may arise against them.

Other negative comments against Cinépolis

It is not the first complaint that is registered against the Mexican cinema company, since various consumer complaints are registered on social networks. From dirty rooms and promotions to the sale of fake goodies can be found on platforms such as Twitter.

Such is the case of a complaint that he registered in that social network, where a user detailed that he received bad treatment, lost a lot of time waiting for his orders and witnessed the omission of basic sanitary measures by the personnel who attend the headquarters of Cinépolis La Cúspide, located in the Municipality of Naucalpan de Juárez, State of Mexico.

The consumer complaint shows how the food area violates hygiene regulations regulated by the Federal Commission for the Protection against Sanitary Risks (Cofepris), by having bags full of garbage in sight, open and near the counter where the food is served and delivered. products.

Also in the publication indicated that the floor in that same area is dirty, as well as the employees of the cinema left the cans of ingredients open at the bar, where all the customers have contact.

Spider-Man and Cinepolis: witnesses to a marriage proposal

Cinépolis modifies its logo with Harry Potter colors for this reason

Best young scientist in the country, Dillan Pérez gets an internship at NASA