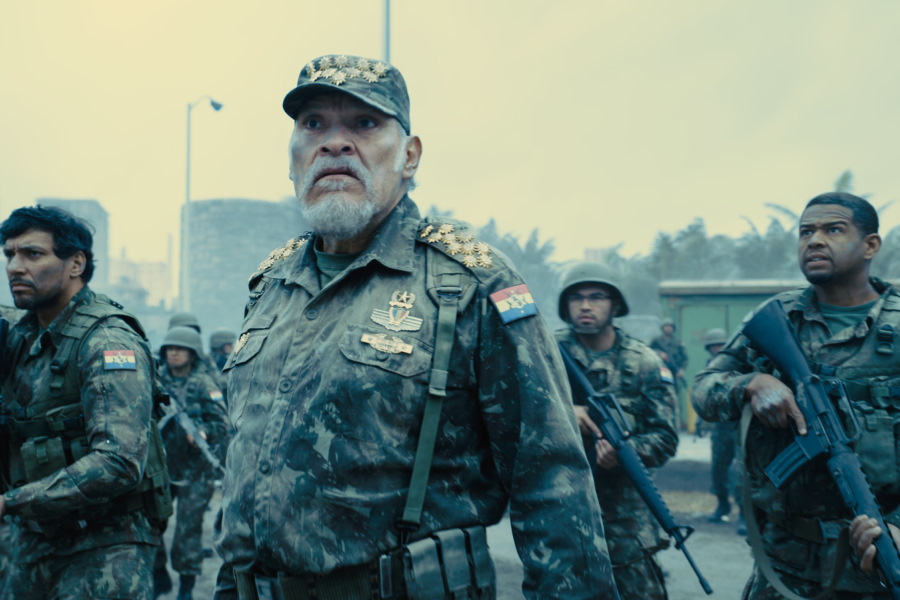 In an exclusive interview for SMASH and DC Comics México, Joaquín Cosio shares his experiences and concepts of General Mateo Suárez, the character he plays in The Suicide Squad

It is well said that talent does not have nationality, and that is made clear by the Mexican actor Joaquín Cosio, who is in charge of playing General Mateo Suárez in the new movie The Suicide Squad, directed by James Gunn.

We recommend: The Suicide Squad – review and criticism (NO SPOILERS)

Joaquín Cosio spoke exclusively to SMASH and DC Comics Mexico about what Suicide Squad fans will find about General Mateo Suárez, as well as some curiosities from the filming, such as preparing the cast for this challenge

SMASH: It was a pleasant surprise to find the name of Joaquín Cosio in the cast of The Suicide Squad. How did James Gunn contact you?

Joaquin Cosio: Suddenly they told me that they were looking for me for a movie, one of the producers contacted and later I had a zoom with James Gunn, obviously he wanted to see me, we talked very briefly, and I was the one who was more surprised than anyone.

I just said yes to everything, my English is not wonderful either, but nevertheless we understood each other and suddenly everything was a reality. You had to travel and prepare because General Mateo Suarez in the Suicide Squad was something quite serious and concrete, it was hilarious.

But the real villain, in this case has been the general (Mateo Suárez) who has an ambition for absolute power and who suddenly identifies them as his enemies, and therefore has to finish them off. Suddenly he becomes the villain to beat, and that gives him a very interesting texture, he has to be the most villainous of all the villains, and that was the fun thing.

Joaquin Cosio: General Suárez’s powers are terrestrial, that gives him a certain weakness or a certain vulnerability, any superhero could face him, as is the case in this movie, where he succumbs to this extraordinary creation of Starro, he is a true victim of this super monster.

READ:  Will DC Comics shut down? "It's the furthest thing from reality": Jim Lee

SMASH: What other DC Comics characters would you have liked to play?

Joaquin Cosio: Oops! I would have liked to be a part of the Suicide Squad, but I would have had to have other talents. All of them are, in addition to being excellent actors, they have brutal training.

I’ll tell you something quickly, I was in a scene with Harley Quinn, with Margot Robbie, where she was subjected to a brutal interrogation, they proposed to use a stunt (a double) and she did not want to use it, in fact she did all the scenes of action.

We are talking about a team of trained actors in the broadest sense of the word. You had to have a high degree of preparation to be able to aspire to be a member of the Suicide Squad.

I would move between two, I love King Shark, because this huge presence is great. The Thinker is a great character, despite being almost a robot he is a very interesting character, and of course the character of Idris Elba (Bloodsport), who is a very powerful and intelligent character.

What can you tell DC Comics readers about The Suicide Squad?

Joaquin Cosio: James Gunn did everything in his power to have the DC Universe reproduced in the film. James Gunn portrays and wants to make it clear that the universe that is in the comics is what you are going to see in the film, that is something that he already made clear.

Everyone who follows and has read the adventures in DC is sure that my great effort is to bring that universe to the screen, and I particularly believe that it achieves it.

Don’t forget to read: Peacemaker: Who # @ &! is this character from The Suicide Squad?

The most memorable moments in DC’s great history… reimagined for a dark new world!

The Dark Multiverse … where everything you fear, every dire possibility, lives in its own reality. Here, the crucial events that shaped the DC Universe happened differently, more sinister, and followed twisted and darker paths.

Tempus Fuginaut witnessed all of this, an immortal being who stands guard at the barrier between universes … these evocative and chilling tales reveal the final destinations of untraveled roads … and the cursed fate of those who chose to follow them.

SMASH and DC Comics México bring you Histories of the Dark Multiverse. This collector’s volume compiles the five One Shots along with their acclaimed precursor volumes that you can’t miss.

The new RED records in 8K and makes Aquaman himself hallucinate