Bullfrag
Home Update everything you need to know (whether you are a newbie or have... 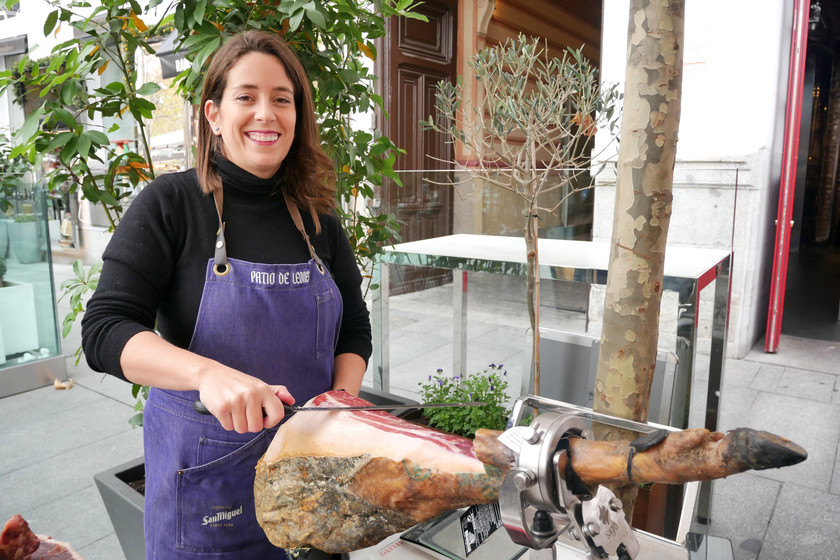 Christmas is the quintessential season for ham. It is on these dates when we receive it as a gift or buy it for pure pleasure, but we do not always treat it well, and the poor man ends up as if he were a skatepark, full of curves.

Many experts recommend that, if we do not know how to cut the ham, we take it to a delicatessen to have it sliced ​​and vacuum packed. It is certainly an option, but cutting a ham in a decent way is not that difficult if we know how, and it gives us an experience impossible to emulate if we just open a container.

Zulima Esteban It is the ham slicer of the Ramses Group, which dispatches the Joselito pieces that are served in the group’s two restaurants in the Plaza de la Independencia in Madrid: Ramses and Patio de Leones.

Although it is obvious that Esteban he will always cut the ham better than us, She herself recognizes that, with the right instruments and following very basic instructions, the piece can be used perfectly at home. So we stuck to her as she cut her first ham of the day and she explained everything we need to know.

The two knives you need to cut ham.

Index hide
1 The instruments: two knives and a ham holder
2 Placement
3 Final cleaning
4 The sliced
5 The conservation
6 Direct to the Paladar Newsletter

The instruments: two knives and a ham holder

If we want to cut a ham well, it is essential to have three basic tools.

The slicing knife It should be long, narrow and flexible. It is used for slicing, and only for that. The typical long and narrow ham knife is worth us, but also a good salmon knife, which is the one Esteban usually uses. “They have a round tip, they do not break my knife sheaths and are less dangerous,” he explains.

In addition to this knife we ​​need another by force, small, hard and pointed, that serves to clean and save the bones. No need to have more knives, but these have to be relatively good and must be well sharpened.

The last important element is the ham holder, “And the one that they give you with ham will never be worth it,” Esteban sentenced. Again, you don’t need to spend a lot of money. The slicer works in Ramses with a ham holder that costs around 500 euros, well, he points out, “a professional cutter needs a ham holder to work for him, otherwise we would be moving all the time”. But for home, he assures, it is not necessary to spend so much. 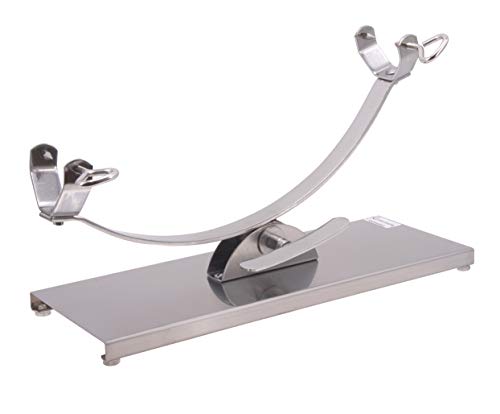 For about 70 euros we have a good ham holder, whose main characteristic must be the stability. Simply, that the ham does not move from its place while you are cutting. “If a ham holder is not stable it is better to catch it with a cat”jokes the slicer. 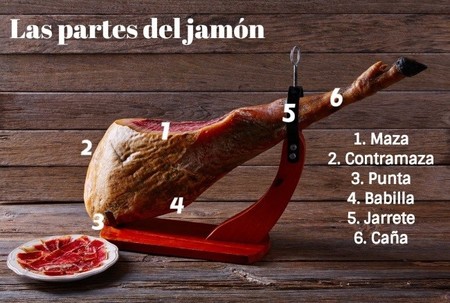 Once we have our two knives, the ham holder and, of course, the ham or shoulder, we have to proceed to their initial preparation.

After unwrapping the ham we must remove all accessory elements at the same time, which only annoy: labels, seals, ropes … In restaurants some of these elements are left to guarantee the origin of the ham, but at home we already know where it came from, so we don’t need them

Now we must place the ham in the ham holder, where we will make our first important decision: the side where we start to cut. Esteban always starts it with the hoof up, which leaves the mace, the widest and fattiest part of the ham face up.

If there are not many of us at home, and we are going to take more time to eat the ham, it is usually recommended to start with the other part, which is narrower and cured, and dries before, but Esteban believes that, even at home, it is better to start with the mace: “It is the juiciest and most colorful part. If they give us a ciborium ham or we spend a pasta on a good one at Christmas, what I want is to enjoy the ham. Normally nobody finishes all the ham at Christmas. Well, we are going to eat the good stuff and we can use the rest to cook later ”.

We must bear in mind, in any case, that once the ham is opened it should be consumed in a month and a half, ideally in less than a month. Therefore, if there are few of us, it is better to opt for a shoulder rather than a ham, which is just as good (or better) and is smaller. It is a bit more difficult to cut, because it has a higher proportion of bone, but the procedure is exactly the same. 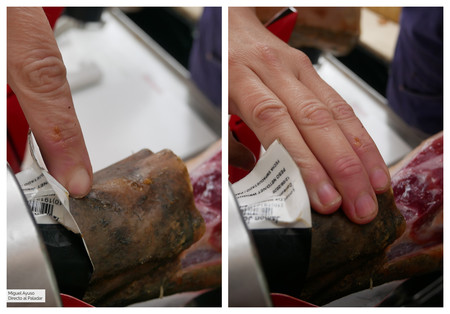 We must count three fingers from the hock and make an incision until we reach the femur.

Once we have the ham and shoulder firmly attached to the side chosen to start the task, we must proceed to the most delicate moment, which is prepare the ham for cutting. This is the part that we do the worst at home and it is what configures the final result. The technique is simple, but you have to follow it strictly.

If we start the ham from the side of the mace we must locate a protrusion on the leg that is known as hock, easily identifiable. From there we count three fingers and, with the help of the small and hard knife, we make a deep cut until we touch the bone (if we start with the stifle, we will carry out this process after turning the ham).

From this cut, we must clean the crust and yellow fat from the ham (which we must always discard, since it is bitter), leaving the piece ready for slicing. In restaurants where a lot of ham is consumed, a large part is cleaned, but at home it is better that we clean less, since the crust protects the meat as long as we do not consume it. “We clean two or three centimeters from the cutting line, we make a line on one side and the other and remove all the bark and yellow fat,” explains Esteban.

Read:  I already have Bizum installed, what uses can I give it? 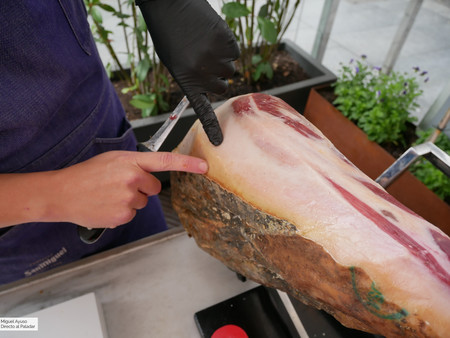 Making the slicing has no mystery. Some people prefer more or less thin, short or long slices, but the important thing, Esteban points out, is that we can eat without problems: “I am not a Taliban when it comes to the size or thickness of the slice. The basic thing is that it does not have yellow fat or rind and that it is thin enough so that we can eat it slice by slice without it becoming a ball ”. 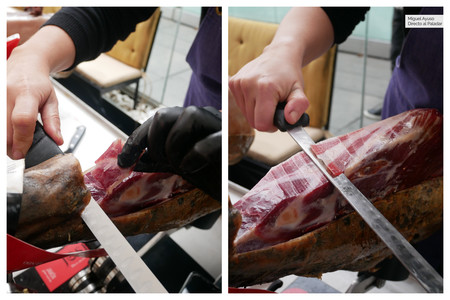 Once we reach the bone we must cut a slice in the opposite direction and make an incision to save it.

As we cut we will have to save the bones, using another important technique, which is the one that prevents the dreaded curves from forming in the ham. When we get to the bone we must cut a slice in the opposite direction, that is, towards the bone and, with the help of the short knife, make an incision in the meat, which will release the bone.

If we start with the mace “We are going to find different bones as we move forward: the hip bone, the tibia and the fibula, and underneath is the femur ”, explains Esteban. “We are going to go down, saving the bones, and When we get to the femur, we have to turn it over, placing the cut that we have made in the mallet parallel to the table. If the support does not allow us to tilt, we put it as flat as possible “. On the other hand, he explains, “we have no bones other than the hip and the patella, but the process is the same, saving the bones and marking them.” 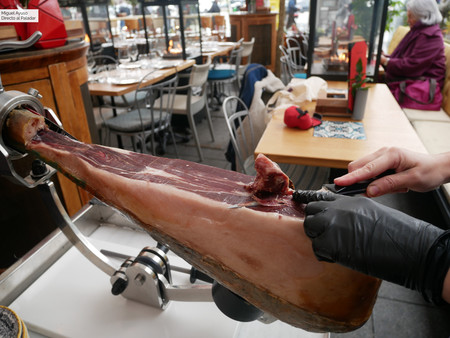 The bones must be cleaned with the small knife.

Finally, Esteban gives us an expert tip. In almost all the hams we are going to find a kind of cluster between reddish and brown, which has a color somewhat different from the rest of the ham. It’s about a lymph node which, after the slaughter of the pig, has become inflamed, and is more or less dilated. “It is not harmful nor does it taste bad, but the texture is different, it is as if it were a gizzard, and it is usually removed so as not to serve it because to the palate it is unpleasant “explains the cutter. There are usually three per ham, and it is enough to remove them with the small knife to continue slicing.

Another defect that we can find in the ham is what is known as tyrosine crystals. We usually see them in the better hams a priori, but it is not a virtue of the piece; there is nothing wrong with them, nor should we do anything with them. “It comes out in the highest quality hams or prolonged curing, but it is not a quality symptom”, Esteban explains. “Formerly this did not come out. It has more to do with the fact that now hams are made with less salt than anything else. But they are tyrosine crystals, it is not the acorn, or the salt, or anything like that ”. If there are too many, it may be an indication that the ham has been frozen or its curing has been artificially accelerated. 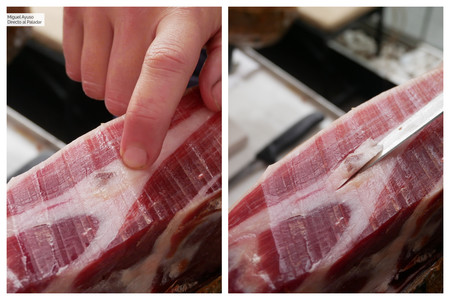 The last important aspect to take into account to cut a ham well is its conservation once we have finished slicing.

“The ham must be protected from his enemies, which are air and light ”, explains Esteban. The cutter advises to put a transparent film and squeeze it so that there is no air on either side, and on top of it a cotton cloth. You can also add a little fat so that the ham does not dry out, but it must be white, never yellow, as it is rancid.

An expert trick is that, when cleaning the ham, we make a ball with the white fat that we extract and store it in the fridge. This will prevent the fat from becoming stale, and we can use it to spread the ham before covering it with film. This, Esteban assures, is better than giving it oil, and if we always give it sunflower, it does not add other flavors to the piece.

Once wrapped, the ham should always be kept in a cool and dry place. If we have it in the kitchen, the ideal is that it is not near the refrigerator, which gives off a lot of heat, or near the fires or the oven.

Following these rules there is no reason not to enjoy a good ham at home.

EA promises news for Battlefield 2042, but …