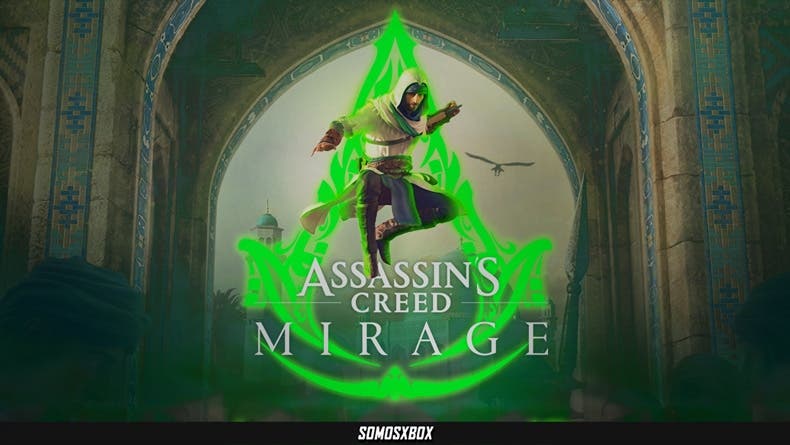 During the past Ubisoft Forward, fans of Ubisoft’s most famous saga were able to enjoy the Assassin’s Creed Showcase, where we discovered the future of the franchise, which looks very exciting with the releases of Mirage, Red and Hexe. Although, in a future time we will travel to Feudal Japan and possibly the Holy Roman Empire during the witch trials. But before embarking on these adventures, very soon we will embark on a journey through the beautiful city of Baghdad in its golden age, guided by the well-known Basim in Assassin’s Creed Mirage. So without much more introduction, we leave you with Everything we know about Assassin’s Creed Mirage.

After a long few years without an Assassin’s Creed game, as Valhalla was receiving post-launch content for two years, now Ubisoft has abandoned for a short time the development of an RPG game, since Assassin’s Creed Mirage will be what a large majority of fans have been waiting and requesting for years, an Assassin’s Creed like the classics.

Index hide
1 Everything we know about Assassin’s Creed Mirage
1.1 Release date and platforms
1.2 History
1.3 Baghdad and other places of interest
1.4 Parkour, stealth and combat
1.5 Arab and Muslim mythology
1.6 Editions and prices

Assassin’s Creed Mirage, which was originally intended to be an expansion of Assassin’s Creed Valhalla, has finally become an independent game with that essence of past installments, such as those starring Altaïr or the beloved Ezio Auditore, who have received nods to through the game trailer. Mirage will return to the classic style of the franchisewith a story centered on Basim’s evolution into a murderer, which it will last about 20 hours.

Assassin’s Creed Mirage does not yet have an exact release date, but Ubisoft has already confirmed that will arrive throughout 2023 both to the consoles of the last generation (Xbox One and PlayStation 4) and the new generation (Xbox Series X | S and PS5), as well as PC.

As we’ve discussed, the length of Assassin’s Creed Mirage will be in tune with the games released before Layla Hassan’s RPG trilogy, as it will be a narrative-driven action-adventure story that follows a defiant young man’s transformation into a Master Assassin with a troubled destiny. Without a doubt, many of us appreciate a shorter story and leaving aside the RPG genre, since that means that we could be facing a game that is very careful and detailed to the millimeter.

The young and cunning Basim, through a series of circumstances, ends up being a student who will become a Master Assassin some 20 years before what happened in Valhalla. But to get there, he’ll need the help and advice of Roshan, a powerful assassin within the Hidden Ones in Baghdad. She will be the mentor of the young thief and future murderer, Basim. Before becoming a mentor, Roshan was a former Persian slave, but now she has an important role in the game, being a master assassin in Alamut.

Baghdad and other places of interest

Assassin’s Creed Mirage will be set during the Golden Age of Baghdad, a beautiful Arab city full of people around its 4 districts: the industrial district, the district of knowledge with the House of Wisdom, which was the largest library of that time, where scientists from all over the world discussed and also reviewed the scriptures. You also have another district that is all about business connections from all over the world. And finally, we find the center of Baghdad, known as the Round City, a rich district where the palace and administration are located.

This would be the Assassin’s Creed Mirage map

In addition to the City of Baghdad, Assassin’s Creed Mirage will take us through its surroundings during the Abbasid Caliphate and Alamut, the legendary home of the Assassins who laid the foundations of the Creed in this moving tribute to the game that started it all.

Read:  Warzone 2.0 announcement and other news about the new Modern Warfare 2 will be revealed very soon

With the bustling streets of Baghdad, our assassin Basim will have to take advantage of the heights to make his way, something that reminds us a lot of the first Assassin’s Creed. For better news, Ubisoft has confirmed that in Assassin’s Creed Mirage we will be able to go around the city doing parkour without limits, since Unity was an inspiration to achieve that goal. In addition, by taking advantage of the widest variety of tools to date, we will be able to stealthily take down our targets with more visceral murders than ever.

We’ve got new moves for Basim, and we’ve also added more density of NPCs in the city, which is really key because it helped us move very quickly across the rooftops of Baghdad.

At the end of the Assassin’s Creed Mirage trailer Basim could see a Djinn, a creature that is currently unknown in that it will affect the story. But seeing this, it has been confirmed that Mirage will have Arabic and Muslim mythology, as Origins, Odyssey and Valhalla did at the time. Although, while we wait for Ubisoft to reveal the first details about the Djinn, I have once again put on Sherlock’s glasses to bring you some interesting information about this mythological creature.

The Djinn (name in Arabic), is a fantastic invisible being but that sometimes makes an appearance taking the form of human beings, animals or plants. In the context of Islamic folklore, the term Djinn is used both for a collective designation of any supernatural creature and to refer to a specific type of them. Now we can only wait to see if it is a caring and benevolent genius or a creature responsible for misfortune, possession and disease.