everything I would have liked to know before starting to play

By CooperOctober 19, 2022No Comments7 Mins Read 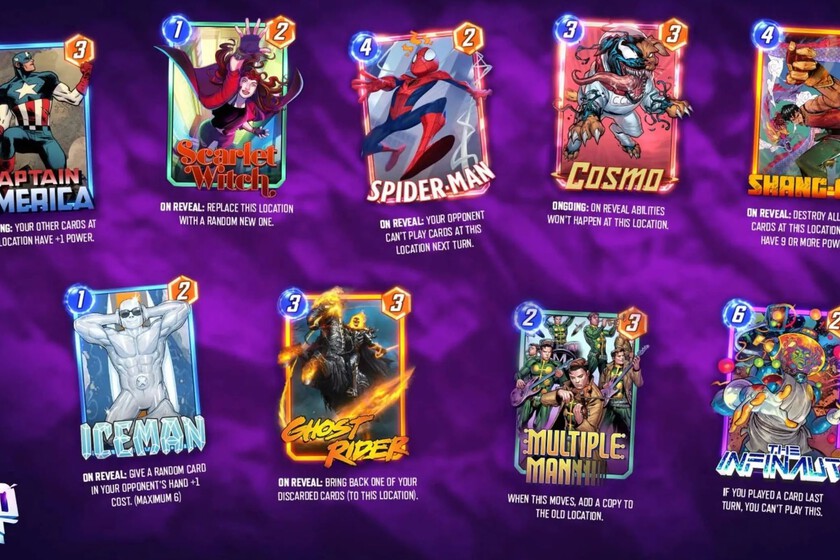 Marvel Snap may seem relatively easy at first glance, but the fact that it is a free-to-play game, has its own premium currency, and all the goings-on that the free-to-play model usually brings with it, means that we sometimes make mistakes. rookie mistakes during our first hours of play.

The idea of ​​this guide is precisely to prevent that from happening. Know a little above, and without the need to crush surprises, how to face the first hours with Marvel Snap, without us having the feeling of having wasted time, resources -or even money-, for not having known what lies ahead for us beyond the first games. This is all what I wish I had known before I started playing Marvel Snap.

The important thing in Marvel Snap is how it ends

Even if you think it’s easy to read the course of a game, even when all the locations have already revealed to you what their rules are going to be, don’t throw in the towel easily if your strategy is well thought out. It doesn’t matter that right now the rival has more points than you in most of the bases, because a large part of the grace is to turn that type of game around and win despite having everything against you. Patience and play your cards wisely.

The order of the cards matters

One of the big rookie mistakes when playing Marvel Snap It is not realizing that both the placement of the cards and the order in which they are placed on the board can turn a game around. Keep in mind that the game will reveal the cards in the same pattern as the one you placed them in, so make sure you do it looking for the best possible synergy.

On more than one occasion I have thrown games that I could have perfectly won if I had stuck to the strategy my cards called for. Being very small decks, the probability that the ones you need will end up being very high, so don’t do like me and make the mistake of covering gaps because you don’t have patience. Time has shown me that it ends up being better to play it.

I will not deny that during many games I have had the feeling of playing against rather clumsy bots, but reading some nicknames has shown me that there was actually a person behind choosing the worst possible decisions.

Among them, the one that I have come across the most, is that of people ignoring the potential that playing a card in one place or another can have without being so afraid of being behind in the scores. Take advantage of the buffs and nerfs offered by much of the location rules in Marvel Snap It is much more important than it might seem.


Don’t be afraid to experiment with decks

Returning to the idea of ​​small decks, with just 12 cards, one of the great assets of Marvel Snap is that it allows you to make many combinations while maintaining some control over what you are playing. Unlike other card games with larger decks, here it is much easier to anticipate what you are going to get and how you can take advantage of the synergies between one card and another.

Regardless of how much or little you can pull from beginner decks, I strongly recommend that you fiddle with as much as possible. It is very easy to find a group of cards that really suit your way of playing and give you some peace of mind when starting to climb positions in the competitive.

Read:  the return of Ains shows his plans in season 4

Upgrade your Marvel Snap cards whenever you can

There’s no reason not to upgrade any card you have in your collection, even if you’re not willing to use it in your main decks. The idea behind card upgrading is also to progress through all levels and thus also the best way to get new cards and resources to keep the wheel spinning.

Completing quests is a must to advance in Marvel Snap. Forget about gold, credits, resources and everything related to this. If you want to advance, upgrade cards, and continue to progress through the game, the key is to complete both daily and weekly quests. They will be your best source of resources to progress.

Giving up is an option

One of the things I liked the most about Marvel Snap it’s how he approaches the idea of ​​losing a game. Where in other games this can be a drama, here it is presented with the maximum possible transparency. Trying to lose the minimum number of progress points possible, the ideal is to concede a game when we see that, due to the hand we have and the point at which the rival is, it is difficult to turn it around.

In the same way, if you want to level up fast and you see the game very clearly, don’t hesitate for a single second to Snap. Clicking on the cube at the top of the screen doubles your bet, allowing you to take eight progress points instead of the usual four. Playing with this measure is also a good way to bluff and try to scare the opponent so that he ends up retreating himself.

Avoid upgrading cards in the store

Although we have already mentioned that the idea of ​​improving the cards should be one of your main objectives, you should keep in mind that the credits are the bottleneck of this Marvel Snap and you should not spend them lightly.

Precisely for this reason, try to avoid spending them on improving cards in the store by getting the appropriate power-ups. It is much easier to keep them safe and simply wait for the game to end up giving you what you are looking for.

If you’re having trouble deciding what to spend your premium in-game currency on, this Marvel Snap gold guide might help you understand in more depth where you should and shouldn’t spend it, but if you’re looking for a quick rundown on it Ideally, you should focus on getting new variants of cards that you can improve.

Far below in the recommendation on how to spend the gold of Marvel Snap It would be buying credits and, almost at the same level, accelerating the appearance of new missions. Better be patient.

The season pass only lasts one month

This may be the point that seems to me the most controversial of all that I have seen of Marvel Snap so far: the idea of ​​having a battle pass that barely lasts a month. I admit that it scares me a little not only for having to pay that amount month after month, but also for the fact that you come up during these first days and then you don’t have time to complete it.

On the other hand, what has been seen so far seems to give reason to think that the challenge is going to be relatively easy, and that once everything important for this season has been achieved, there will be chests with juicy resources waiting to be enjoyed. In any case, it is worth keeping it in mind.

If you liked ‘1899’, you should see these 3 movies from its creators

Amazon to lay off 10,000 people starting this week: NYT