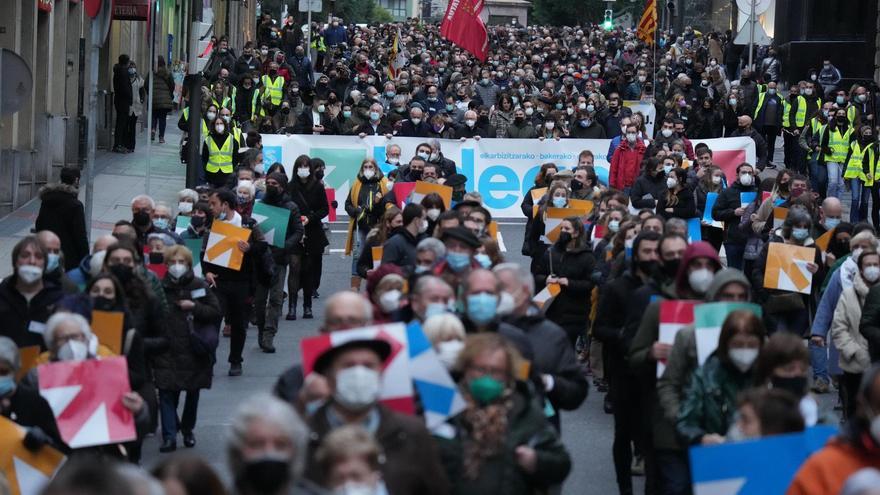 A total of 191 mobilizations convened by the citizen support network for ETA prisoners, Sare, in many other towns in Euskadi, Navarra and the French Basque Country have requested this Saturday andl end of the exceptional prison policy for inmates of the terrorist gang and bringing all of them closer to prisons in the Basque Autonomous Community.

These decentralized mobilizations have replaced the traditional large demonstration that is held annually in Bilbao after Christmas in favor of the rights of ETA prisoners due to the existing health situation in the Basque Country due to the strong rise in coronavirus infections.

For this reason, they have been held marches in the three Basque capitals and Pamplona and Bayonne (France), as well as in other 186 municipalities of the Basque and Navarre geography.

The demonstration held in Bilbao was attended by several hundred people who have chanted slogans such as ‘Presoak kalera, amnesty osoa’ (prisoners on the street, general amnesty) and “Presoak etxera” (prisoners at home) and representatives of EH Bildu, with their parliamentary spokesperson Maddalen Iriarte at the head and of Catalan sovereign parties and organizations such as Junts per Catalunya, the CUP and the ANC .

For health reasons se has also reduced the route and duration of the march that began in the central Plaza de Moyua and, after touring the first section of Gran Vía, it has concluded in front of the Town Hall, where a statement from the organizers has been read.

“We only ask for justice”

It warns that “we cannot accept and it is hard for us to believe that, after more than a decade without patent violence, we have to continue claiming something as elementary as that the prisoners, who are serving reparatory penalties, are subject to rights thus established in international treaties, in the Spanish Constitution and in the laws “.

Sar has also denounced that “Grade progressions are kept blocked or prison permits are prevented” and that “even when the Treatment Boards of some prisons approve some degree progression or penitentiary permit, the National Court, through the prosecutor’s office, resorts to it, reaching the point that some inmates in the third degree have already returned to jail. second degree penitentiary “.

Read:  the best series you can see this year

“We are not demanding any privilege. We demand justice, only Justice. We are claiming human rights. We are not facing political demands “, they have concluded.

In Vitoria, Three columns have converged in the Artium Museum in the capital of Alava, from where after 5:00 p.m. the march began which has run to the Plaza de la Virgen Blanca.

Transfer of prisoners to Euskadi

Protesters have marched respecting the security measures against covid-19, masks and safety distance, and along the way they have chanted slogans in favor of the release of ETA prisoners and their approach to prisons in the Basque Country.

In San Sebastian, more than 2,000 people have supported the call for Sare in a demonstration that has developed through an unusual route, from the Plaza del Centenario, in the Amara neighborhood, to the Boulevard.

Slogans calling for the transfer of inmates to the Basque Country and others who demanded amnesty have been heard throughout the march, which was joined, among others, by the parliamentarian of EH Bildu Nerea Kortajarena, the spokesperson for this formation in the General Meetings of Gipuzkoa, Juan Karlos Izagirre, and the former general secretary of LAB Rafa Díez.

The president of the PP of the Basque Country, Carlos Iturgaiz, has criticized the holding of these demonstrations and condemned whatand its objective is “to bring the ETA criminals out onto the streets, without paying for the heinous murders committed by these savages.”

“The proetarras of Bildu try to cover their shame by placing on the same scale and equalizing all the violence”, has concluded in a message on their social networks.