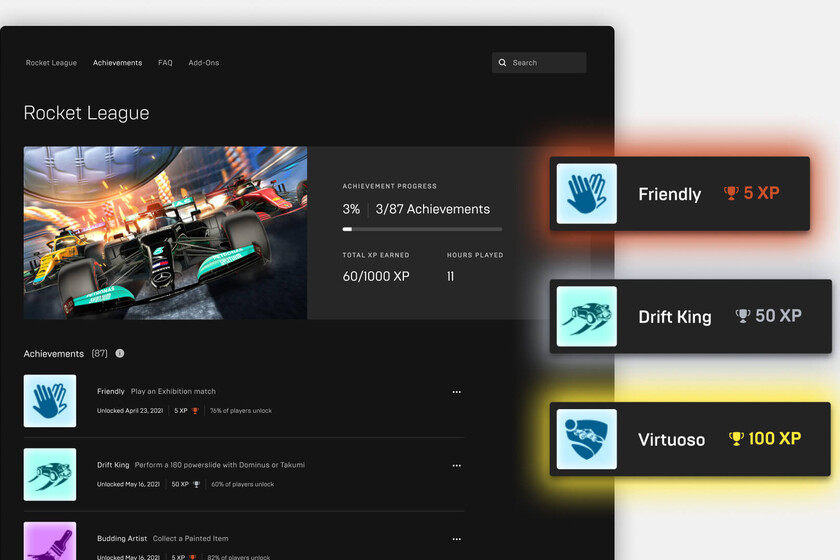 The Epic Games Store still lacks many updates to be able to measure face to face with its most direct competitor, Steam; but somewhere we will have to start, right? Well, the parents of Fortnite do not stand idly by and announce the arrival of achievements to your platform.

According to a new official blog post, only some EGS games will be compatible with this feature when it debuts next week. We talk about Rocket League, Hades, Pillars of Eternity, Kena: Bridge of Spirits, Zombie Army 4, Alan Wake Remastered “and more” without specifying.

Interestingly, when choosing between the typical Xbox unlockables and those of PlayStation, those responsible have chosen to take everything at once: fans of Kratos, Ratchet and the like will recognize the categories of bronze, silver, gold and platinum assigned to each; whereas if you are more of the Master Chief then you will be familiar with the punctuation of each achievement.

The idea is that the value of each achievement is represented by both a trophy:

Platinum for each game is achieved by collecting 1000 XP from all achievements, which means that if you try hard enough you will get at least 1250 XP for level up your profile with every game. Its managers claim to be working on “other social experiences” that should be available before the end of 2021.

The name of the new Pikmin mobile game is leaked

which ones are there and how to download new ones