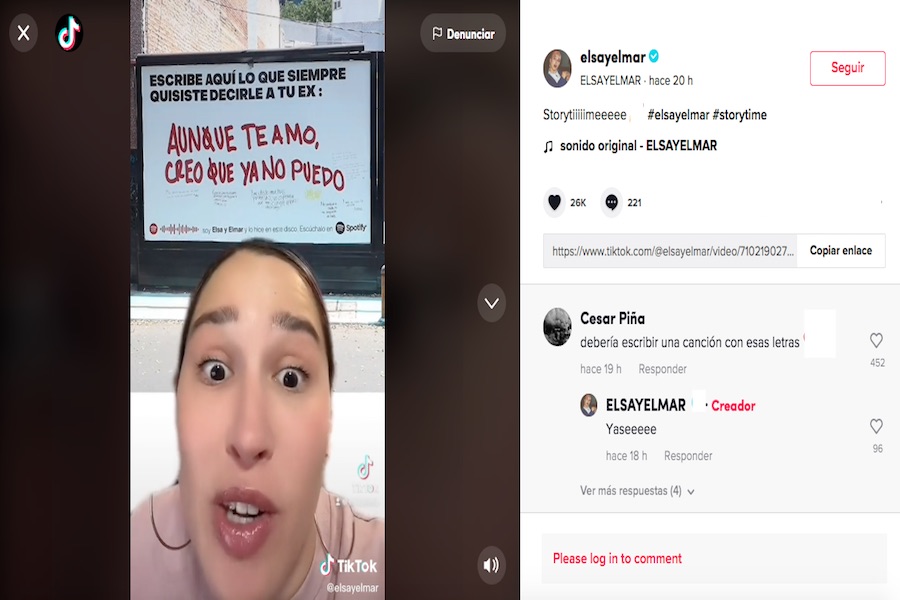 Elsa and Elmar revealed the best creative formula to take advantage of the fences advertising and turn them into calls to action and the formula is simple, by explaining that you only need one call to action.

“A few weeks ago I released new music and my team told me that we had the opportunity to put up billboards around the city, to promote the album. In this case, since the album was so personal, the promotion was different. I had always dreamed of putting lyrics of my songs on the billboards, where the face appears and it occurred to me to give people space to let off steam by responding to a very clear message: ‘write here the message you always wanted to write to your ex ‘ and it was very shocking that you let go more than I expected, “explained the artist.

The creativity shown by Elsa and Elmar

In case of Elsa and Elmarin the way in which he uses a traditional medium such as the billboards It exposes a very important point and it is the possibility that brands have to make the most of the resources at their disposal. The product to be promoted as music, together with a traditional medium and in which it seems that we have already seen everything, when they have the most authentic and clear strategy, the best result is achieved.

Read:  Brands that focus on sustainability are more loved

Elsa and Elmar It only needed a clear call to action and the rest made sense, as is the use of a fence as traditional as the release of music.

There is a very important segment in the creative market, which has to do with the possibility of understanding what works for brands and, most importantly, in this understanding, what we must stop using.

Edith Márquez is another singer who demonstrated the impact of a billboard but not because of a clear call to action, but because of a ‘clear mistake’when the artist’s team promoted one of her concerts with a tremendous mistake, they forgot to give the reports of the event and placed the text boxes on the billboards waiting to be filled by the content.

2022, a good year for outdoor advertising?

Outdoor advertising seems to continue to revitalizebecause year after year we know of cases that warn us of the importance of these external media.

As proof of this, one aspect that we should not discard is the ability of creativity to take advantage of these media. Its importance has already been noted, especially when in the season of large mobilizations in the streetsthe scenario of billboards was tremendously valuable, to be able to make the most of this medium and not only that, to innovate in the way in which the consumer is integrated into this activity.

In the street there are the largest number of activations that remind us how important it is to understand the audience.

creativity on the street

The outdoor environment is without a doubt the best space to be able to activate campaigns that achieve rapid identification with the pedestrianeither because you are a brand that takes advantage of mobilizations, with which you express your activism in certain situations or an artist with a clear call to action, who manages to detonate the importance of this medium before the ordinary consumer.

This makes it more than necessary for agencies to understand the weight of well-executed creative ideas and, most importantly, the ability with which today they define the scope of a product when it needs to be promoted and has the opportunity to do so on a billboard. . Regardless of whether it is a generic product (such as the egg, Bachoco has made the spectacular its best medium) or something as traditional as a new album (Elsa and Elmar or Edith Márquez have shown that it can be done).