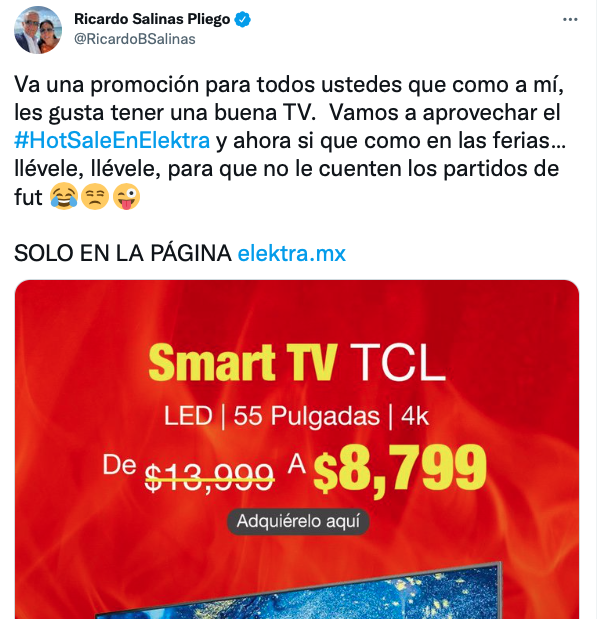 Social networks are a very large space and they have a very large reach throughout the world. That is why many people and brands use it as the favorite medium to promote their products and services and the entrepreneur knows that very well. Ricardo Salinas, who used his personal Twitter account to promote advertising for Elektra’s Hot Sale that surprised all his followers with a television offer of 8 thousand pesos.

The recent report carried out by We Are Social and Hootsuite, details that there are currently 4,620 million network users in worldwide, representing a year-over-year growth of more than 10 percent.

Given this data, it is normal to find all kinds of content on digital platforms where the most recurrent are consumer reviews when narrating their good or bad experiences with a brand.

Once again, the owner of Grupo Salinas surprised his entire digital communityl after taking rein of the publicity of the Hot Sale of Elektra in his personal account of Twitter.

Through a publication, the Mexican businessman and owner of TotalPlay, Banco Azteca and Tv Azteca, shared what He considered a super offer for the Hot Sale of a TCL Smart TV set at 8,799 Mexican pesos.

This is a promotion for all of you who, like me, like to have a good TV. Let’s take advantage of #HotSaleEnElektra And now I eat at the fairs… take him, take him, so they don’t tell you about the soccer games 😂😒😜

Salinas’s tweet caused his digital community to congratulate him for using his influence on networks to promote his store, but it also drew some criticism from other netizens who criticized the product and service that Elektra provides.

“Excellent to the businessmen of my country, they are ashamed to promote their companies, they are not going to do it with the offers of the moment, my admiration for you is great”, can be read in one of the comments of the tweet.

“A millionaire guy advertising his business through this medium… I think that’s why it is what it is!! Greetings and admiration !!”, says another Internet user.

“With the interests that Elektra manages, she ends up paying for two. That is not beneficial for the client, only for the bank and in the end that is a win, a win, only for Elektra”, says another comment.

Let us remember that the Hot Sale campaign is currently underway, which began last Monday, May 23, and will continue until May 31.

Read:  more than a marketing event

Some consumer complaints have been registered on social networks, where brands such as Walmart, Bodega Aurrerá, Mercado Libre and even Elektra stand out for not providing a good shopping experience to their customers and even for promising false promotions.

Justin Timberlake sells his catalog of songs for 100 million dollars