Electrification of SEAT and CUPRA, the best-selling cars in April… Motor news on Twitch 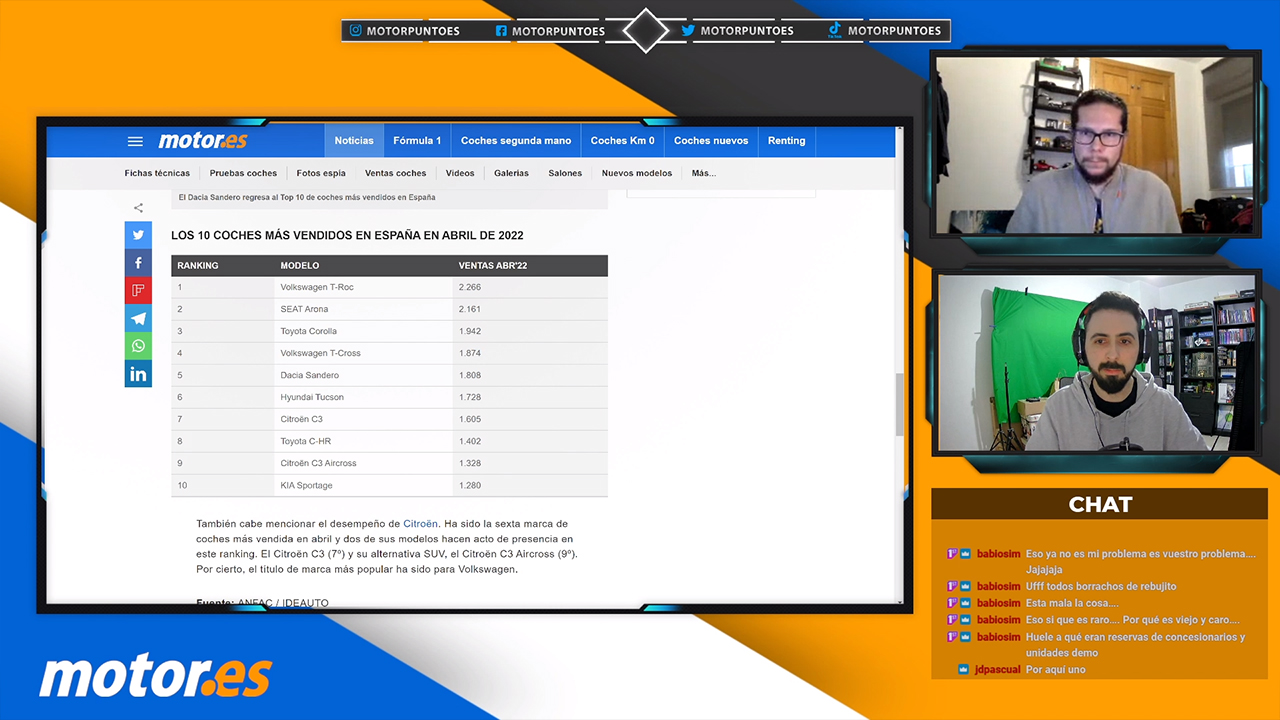 The electrification process of SEAT and CUPRA, the sales figures for new cars that the month of April 2022 has left us and the test of the new Subaru Solterra, have been some of the main topics in the recent direct from Motor.es in Twitch. If you have missed the live broadcast, you have the opportunity to enjoy this comprehensive analysis of current events in the automotive sector on a delayed basis.

The registrations of new cars in Spain during the month of April 2022, as well as the electrification process that the SEAT and CUPRA brands will carry out, have been several of the main topics of the recent live broadcast on the Motor.es channel on Twitch. A complex analysis piloted by the Motor.es team and our sister portal Forocheselectricos.com that you have the opportunity to watch on a deferred basis in case you missed the live broadcast.

As the broadcast coincided with the first working day of the month of May, for a large part of the Spanish territory, the opportunity was taken to analyze the sales figures that the market has left us in April. Some data that highlight the problems that the automobile sector has been going through. The stock crisis in dealerships due to the global shortage of microchips continues to take its toll on business. And as if that were not enough, to this we must add the economic uncertainty that flies over Spain and the rest of Europe.

Beyond commenting on which have been the best-selling cars in Spain during the month of April, we take advantage of the moment to go further and review some of the curiosities that can be extracted from new car registrations. For example, the first model units that will play a relevant role have been registered in the months to come. Renault Austral, Volkswagen ID.5, Nissan Ariya and Toyota Aygo X Cross are some of them.

Read:  Ferrari values ​​the premiere of the new engine and advances the plan for Sainz

The market analysis led to a very interesting debate about the real savings offered by an electric car throughout its useful life. A space was also dedicated to discussing the existing price difference between thermal cars and equivalent electric vehicles. For this, the Peugeot 208 and the Opel Corsa were taken as reference. It is important to remember that both models are marketed both with internal combustion engines and in a 100% electric version.

The recent Subaru Solterra test carried out by the Motor.es team could not miss it. And it is that, taking into account that in previous live shows we had already commented on the first impressions that the new Toyota bZ4X Y Lexus RZ450eit was practically obligatory to comment on this other electric that has also been developed on the e-TNGA platform.

Last but not least, the moment was used to comment on the roadmap to be followed by the SEAT and CUPRA brands in terms of their electrification process. CUPRA has decided to bet without complexes on the electric car while SEAT will give priority in the coming years to efficient thermal engines and hybridization.

Do not miss any of our direct, follow us on Twitch!

When do we go live on Twitch? All the Monday and Thursday at 19:00 Peninsular Spanish time we will be live reviewing and analyzing the current situation of the automobile sector. We invite you to join us on these adventures to interact with the Motor.es team live and share your opinions and doubts.

Anonymous, the new agency for Volkswagen, SEAT and CUPRA