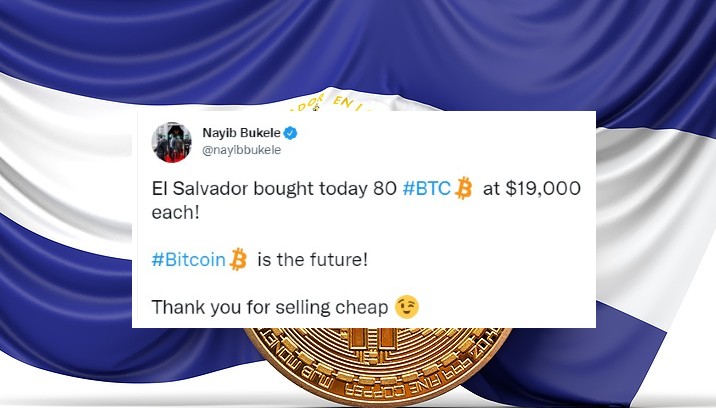 Nayib Bukele, the president of El Salvador, said this Friday that his country will buy another 80 Bitcoin worth about US$1.5 million. The investment (investment?) comes as the world’s most recognized digital asset is down more than 60 percent so far in 2022.

“El Salvador today bought 80 Bitcoin at $19K each! Bitcoin is the future! Thanks for selling cheap.” said the president of El Salvador on the social network Twittermeans that he habitually uses to communicate.

Until before this purchase, El Salvador had acquired just over 2,300 units of Bitcoin, without revealing how many of these coins it still holds and how many it has sold.

It is only known, from some local media publications, that in the middle of last month the Government sold some bitcoin to finance the construction of a pet hospital.

Thank you for selling cheap 😉 pic.twitter.com/ZHwr0Ln1Ze

The most valued digital asset in the crypto market is not having a good time in its price. With a price of 19 thousand dollars, it closed the first six months of 2022 with a decline of 62 percent.

If the prices are compared with those of the end of 2021, the difference is even greater.

Despite the instability in the market that has occurred in recent times, the head of the Ministry of Finance of El Salvador, Alejandro Zelaya, said that the Central American country has not registered losses.

If the current prices are compared with the values ​​at which he bought most of his Bitcoin El Salvador, close to 69 thousand dollars, the drop exceeds 70 percent.

At the beginning of 2022, even before, the International Monetary Fund (IMF), an organization with which Bukele was negotiating a loan of 1,450 million dollars, urged Bukele to “limit the scope of the Bitcoin Law”.

Specifically, he told him to eliminate the condition of legal tender. The IMF also warned him that he was concerned that the country issued bitcoin-backed bonds.

Along the same lines, different risk rating agencies pointed out that El Salvador will need funds to face debt payments in 2023 and that, in the midst of the bitcoin price crisis, it would not have to pay them.

A note from Fitch Ratings, a credit risk rating agency, said then that the adoption of bitcoin in a context of volatility and low financial inclusion of the banking sector in El Salvador and little connectivity was dangerous for that country.

All the rating agencies have lowered the note of the Salvadoran debt in recent months, which further complicates the country’s finances to be able to take more credit to pay off future maturities.

In February, before this week’s crash, Fitch lowered El Salvador’s rating to its lowest level and said the outlook for the future is “negative.” Moody’s, in May, did the same.

Bitcoin crash: a crypto fund defaults and the market finds no floor

Why is Bitcoin the best money ever? – 1st part

Jack Dorsey founder of Twitter proposes to create the web5

Bitcoin price loses more than 7% in 50 minutes: what happened?