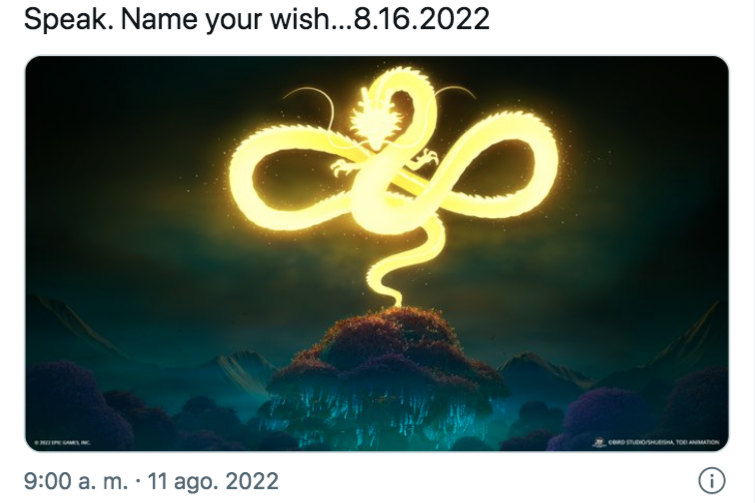 Today, through social networks, Epic Games announced that the skins of ‘Dragonball’ will come to Fortnitea post that has thrilled a significant legion of anime fans.

Fortnite is one of those platforms that, as part of its strategies, usually joins the trends to grow its popularity and, with it, win over the community. Between his skins most used are Travis Scott, Harley Quinn, Black Widow, Marshmello, John Wickamong others.

Now, as part of that initiative to gain more followers, the skin of some characters from the already iconic anime of ‘Dragonball’although, for now, it is not known which ones will be released specifically.

The arrival of the pandemic was the moment for Fortnite to decide to exploit its popularity, as shown by a study carried out by Business of Apps and Stream Hatchet, which indicates that, in 2020, the platform registered a record figure of over 550 million of hours of views.

Now, for the following year, the situation was not the same, since it could only encompass about 390 million hours of Fortnite on the different streaming platforms worldwide.

A rumor had already been going around for some time that, finally, ‘Dragonball’ It would make its appearance in Fortnite, being one of the most anticipated movements by fans.

CONFIRMED: These are 3 of the 4 upcoming Dragon Ball skins!

(thanks to @MidaRado for confirming this!) pic.twitter.com/UvhNMkdsYM

Second part of the concepts of skins #Fortnite x Dragon Ball, do you like them? ? @ BATPLAY47 https://t.co/CdUwRWbrCM pic.twitter.com/Vol1RGtaVK

Today, through their social networks, the rumors were confirmed and ‘Dragonball’ will be part of Fortnite with a series of skins which will be released on August 16.

So far, however, it is not known which characters will arrive on the platform, although in networks, as has already been discussed, there is talk that Goku, Vegeta and Gohan will be the inevitable in this initiative.

The bet for ‘Dragonball’ is very clear, especially in a context in which the anime is close to releasing, in Mexico and Latin America, its new movie ‘Dragon Ball Super: Superhero’.

And it is that, in addition, for years, anime is one of the industries that has served as a strategy for some brands. The AJA (Association of Japanese Animation) annual report 2019-2020 reveals that, in 2020, the anime market was worth 24.23 billion dollars worldwide.

Furthermore, globally, ‘Dragonball’ It is one of the best-selling animated series, only surpassed by One Piece. Mexico, for its part, is one of the main consumers of anime worldwide.

Without a doubt, the anime and, in particular, ‘Dragonball’ They have a great influence on popular culture, so much so that, even in soccer, various personalities have shown their fanaticism for Goku and other characters.

In Spain, specifically at FC Barcelona, ​​Pierre-Emerick Aubameyang has declared himself a fervent admirer of ‘Dragonball’ and, especially, “Goku”, whom he even has tattooed on one of his arms and even has a pair of shoes decorated with the anime.

Increasingly, the “Otaku” community is growing and reaching more young people, because, more than anything else, it is a great market and, therefore, a great opportunity to reach more users.