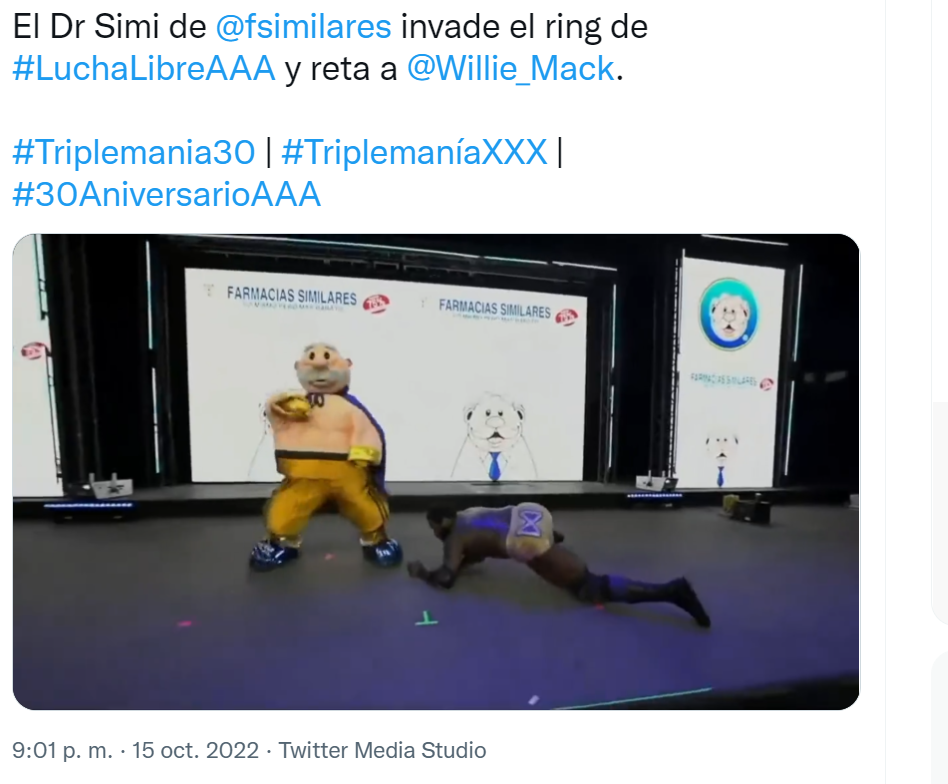 The famous dr simi It has become one of the most influential characters in popular culture among users, as well as one of the most beloved in Mexico; this time he won the hearts of Mexican wrestling fans, appearing on Triplemania and surprising both rude and technical.

Farmacias Similares, Dr. Simi’s home brand, has taken advantage of the natural impulse of social networks to stay current in the digital conversation.

The 30th edition of Triplemanía, the most important event of the AAA, was full of iconic moments. However, one of those that will surely go down in history, due to its media relevance, was the appearance of the dr simi.

The character, who has already been present at concerts of celebrities such as Dua Lipa, Coldplay, Aurora and more foreign bands, has become a tradition for fans.

“Are we going to invade, we came to invade Triplemania! Let’s invade with good vibes. We have been with everyone, in the best events: with Los Tigres del Norte, with Rammsteinin Triplemania, with much love”, shared the famous character.

This is the video of his appearance:

The famous character made his appearance in one of the most important wrestling events in Mexico, challenging a dance fight to Willie Mackwho is part of the company’s talent, after previously “’Simis’ rained” on stage.

Read:  Werevertumorro appears in a Qatar draw and this was announced by the youtuber

Presence of Similar Pharmacies in Mexico

In the same way, it was during this time that the urgency to protect the millions of inhabitants of the Mexican Republic made these companies manage to make a difference, some even risking their lives and dying in the process.

Among them, there are some brands that have managed to create a positive effect in the Mexican consumer, because according to an investigation by the Storecheck medium on the leading pharmacy chains in the countryFarmacias Similares was recently listed as the most important, obtaining 39 percent of participation in the sector, all this having presented the amount of 2 thousand 619 million dollars in sales value; On the other hand, in second place was FEMSA’s Mexican Economic Development, which has more than 2,400 branches in the country; In third place was Farmacias Guadalajara with 1,865 branches in Mexico.

Taking into account that the Mexican market has a considerable offer in practically every item, it is worth highlighting what has been achieved Similar Pharmacies when proclaimed as a leader in this sector, in part due to its great strategies of marketing for which the brand has opted to implement over the years.

About these strategies Similar pharmacies has highlighted mainly due to the presence on social networks of Dr. Simi’s stuffed animals and botargas.