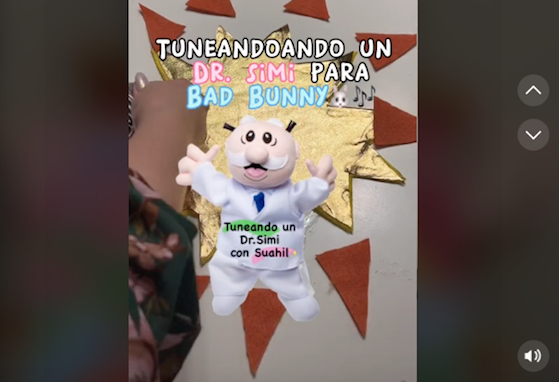 Prior to the concerts that Bad Bunny will offer in Mexico, some fans are already enlisting their Dr. Simi for one more strategy of ambush marketing.

It seems that Dr. Simi is here to stay, because his strategy of ambush marketing which began a little over a year ago, during the 2021 Corona Capital Festival, continues to take steps and, in addition, grants the brand an important position, especially on social networks.

According to some specialists, ambush marketing It can be defined as a marketing strategy used by companies in order to advertise, taking advantage of the popularity and positioning of brands related to a high-impact event. (musical, sporting events, etc.), although, it should be noted, without paying royalties or being official sponsors of it.

However, what has stood out the most about this initiative is the conversation in the digital pulse, a fact that demonstrates the value that it is generating among the Internet users themselves, since, in the end, they are the ones who share their tuned Dr. Simi for different occasions.

Recently, at the Corona Capital Festival 2022, The “Simi emo” stuffed animal, inspired by the band My Chemical Romance, went viralone of the stars of said edition.

Read:  Firefox gets serious and removes all traces of Russian search engines in its latest update

And it is that we must not forget that, at present, it is the social networks that mark all the conversations, verifying, day by day, their importance at a time when the number of Internet users is increasing daily, as revealed by the Digital 2021 report developed by We Are Social and Hootsuite.

Once again TikTok is the social network through which Dr. Simi is going viral, after the stuffed animal that will attend Bad Bunny’s concerts in Mexico was made known, which, by the way, they are already sold out.

In Mexico City (CDMX), the Puerto Rican will perform on December 9 and 10 at the Azteca Stadium as part of his World’s Hottest Tour, which is why even some fans without a ticket are organizing through Telegram to “put together” a party outside the stadium; However, in TikTok the strategy of ambush marketing from Dr Simi.

? I went on vacation – Bad Bunny

The appearance of stuffed animals in various settings has provided great publicity for the brand, and there are even establishments that have begun to take stricter measures, such as what happened with the Telmex Auditorium, which issued a warning to fans who wish to enter the property with said gadgets.

Let us also remember the case of the concerts of the German band Rammstein, where an important group of fans launched a petition so that Simi’s would not be thrown onto the stage as a show of “respect”.