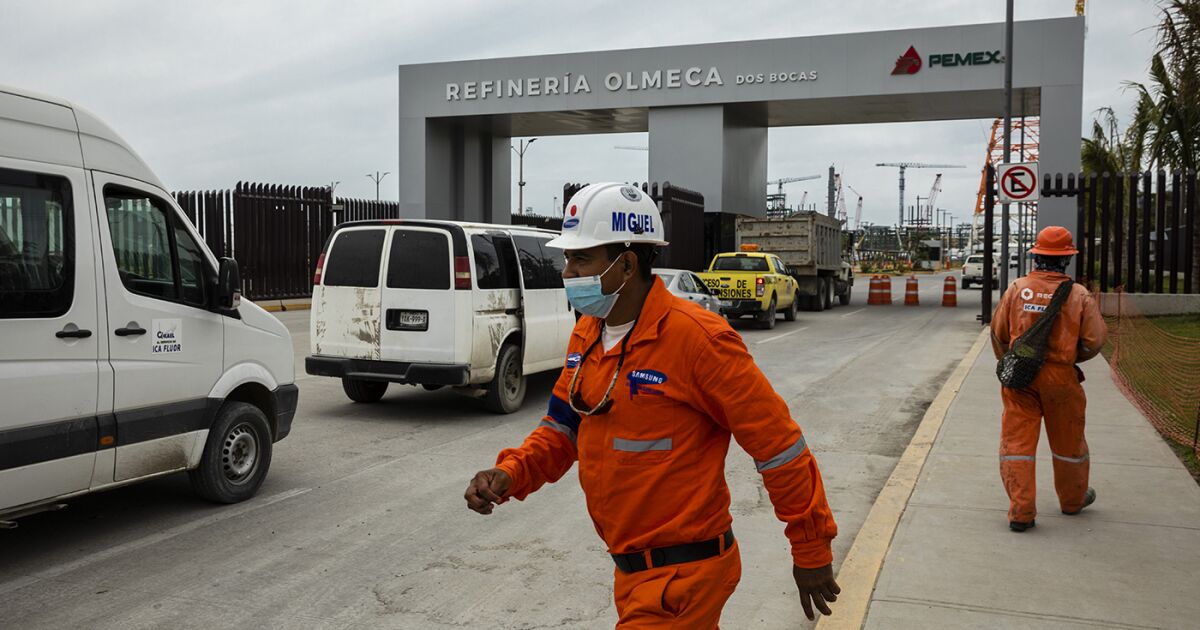 The warnings have come from many fronts: analysts, rating agencies and the largest financial organizations. Perhaps the largest came from the International Monetary Fundwhich in October 2020 recommended that Mexico postpone the refinery plans to lessen the burden on public finances and channel those resources to other “more productive uses”. The presidential response dismissed the recommendation.

Since the announcement, the rating agencies said that Dos Bocas would not add to the improvement in the state oil company’s finances. The recommendation has been constant since it was announced that the project will be inaugurated; better use of financial resources would be allocate them to crude oil exploration and production activities. In his last report, Fitch He does not refer specifically to the Olmeca refinery, but says that Pemex’s credit profile could be affected as a result of the increase in investments in refining, “especially if it is at the cost of reducing investments in exploration and production and increasing leverage.”

The oil company lost investment grade in the first quarter of 2020, after Fitch and Moody’s made adjustments to their respective ratings.

Moody’s He said in his last credit opinion, last February, about Pemex that the refinery will suppose a load of management resources for the oil company, despite the fact that it has been financed by the Ministry of Energy. “When the construction of the Dos Bocas refinery is completed, and the operating capacity of the existing refineries is increased as planned, this will add exposure to lower fuel production margin and will reduce Pemex’s crude oil exports and US dollar revenue generation, increasing its credit risk,” the document reads. The same remarks have been made since the announcement of the construction.

Doubts have also been raised around the refinery about whether the country will have enough to supply oil to the new Tabasco complex. The president has said that the country will not return to imports to cover the demands of the refineries, and even assured that exports will end to cover the latter. But the calculations do not give, say analysts. The presidential plan seeks to bring the use of the six refineries already in operation up to 85%, which would imply process about 2.5 million barrels per day in 2024.

Oil production has stagnated 1.6 million barrels per day and for now, there are no signs of an increase in this figure in the short or medium term. Pemex has not modified its strategies regarding oil extraction.

Read:  Ukraine gives up the fight in Mariupol amid doubts about the fate of its defenders

The most common opinions against the refinery argue a progress of the energy transition, which has accelerated even more with the pandemic. Its inauguration occurs in the midst of a wave of closures of refining complexes that also accelerated during the health emergency.

Since the start of the pandemic, eight refineries in the United States have announced an upcoming closure of their facilities. These actions are usually prolonged and take up to a decade. Companies like Phillips 66, Marathon Petroleum and Shell have joined the list of companies that will divest one of their fuel production assets.

Companies that have decided to shut down their complexes are facing another problem: finding buyers for their refineries. Shell, which sold the Deer Park complex to Pemex, it will permanently close its refinery in Louisiana because it could not find a buyer and the asset became unprofitable due to the pandemic. Another fraction of companies are opting for the conversion of their assets, so that these are now biofuel producers.

Companies no longer want to spend large amounts on maintaining refining complexes, analysts say. The pressure to convert their businesses to something more in line with the energy transition is dampening the attractiveness of the refining sector. The investments are usually large, but there is no guarantee that there will be a return in the long term. The consultancy IHS Markit says that in 2050 the global demand for refined products will not exceed 75 million barrels per day. Current supply already exceeds 100 million barrels. In a few decades, almost 25% of the capacity will be underutilized.

But within this panorama, there is also another fraction of economies that continue betting on refined products and also have new projects underway. Currently the refining capacity worldwide is 105 million barrels per day. Global Data estimates suggest that these new projects will add around 10% more capacity to the international offer. The firm says in a report from a few weeks ago that there are around 215 new projects to add refining capacity. Not only Mexico is betting on new complexes, as India, China and Nigeria top the list.