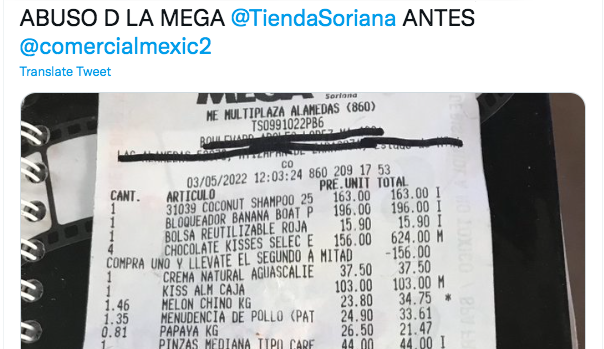 The purchase receipt in Mega Soriana registered a donation of five cents, which sparked a severe claim by the consumer.

One of the most frequently asked questions to consumers -and, in turn, one of the most criticized- is the one that says “do you like to round up?”. Somehow, regardless of the amount, there are clients or consumers who simply do not agree with it.

And it is that one of the reasons why they refuse to do so is because, in reality, they do not know where that extra amount will go, no matter how small.

Currently, there are stores that support this type of practice, such as Soriana, Chedraui and Walmart, to name a few, either through rounding up or “donations”.

The debate, even, gives for more, since there are experts who assure that this type of initiative has great value from different angles: social, fiscal and administrative.

In other words, according to what some experts tell various media outlets, the practice of rounding up or donating benefits the image of the brand by presenting itself as a kind of social benefactor and, in addition, grants a tax advantage to the company.

Now, there are those who affirm that, after all, this fact stimulates the flow of cash, since by rounding up or donating a certain amount in cents, consumers get rid of the 5, 10 or even 50 cent coins that, Finally, they are not usually so busy.

In this context, something similar happens with a consumer of Mega Soriana, who, through her Twitter account, reports that the store charged her a donation of 5 cents without even asking him if he agreed.

According to what he expresses in his tweet, said donation will be destined to the Mexican Red Cross; however, for the consumer in question, in addition to claiming that her opinion was not asked, it is “abuse.”

A DONATION DL Q THEY DIDN’T ASK ME D 05 CENTS FOR THE RED CROSS, HOW MANY CENTS DO THEY CHARGE US WITHOUT NOTIFYING US, AN ABUSE OF THE ?MEGA @TiendaSoriana? BEFORE ?@commercialmexic2? pic.twitter.com/pELk7338bT

Beyond the donation itself, which, apparently, is not the main complaint of said woman, the fact that has caused her the most annoyance is that she has not been asked before; that is, the store automatically charged the amount of five cents without first knowing the opinion of the consumer.

For this reason, as can be read in the tweet, the woman questions “how many cents they charge us without notifying us”, which is, ultimately, the focus of her claim.

Now, as happens in these cases, Soriana’s Community Manager immediately contacted the consumer to follow up properly.

Hi Gigi, we are so sorry for your experience. We want to follow up on your case, so we ask you to go to the store and request a refund of your unwanted contribution. We will wait for you!

This type of situation, as we already mentioned, happens in various establishments. A few days ago, also via Twitter, 7-Eleven customers complained because they were not asked if they wanted to round up.

I open my first thread…

I went to @7ElevenMexico in Coyoacan. I saw that the jug of water I chose cost $31 and a few cents.